In its convenient and lightweight form factor, the ViewSonic M1+ is a capable and functional pico projector.

Well-known for its high-quality monitors and professional displays, ViewSonic has partnered with another well-established brand on the audio side: Harman Kardon provides a powerful sound system for the unit through its dual integrated speakers. As such, the M1+ is more than a slide or video projector; it’s a cool multimedia-capable unit.

And with a handful of connectivity options including HDMI, Type-A and Type-C USB, a Micro SD card slot and Wi-Fi and Bluetooth, the M1+’s capabilities makes it suitable for entertainment or business use, in the home, office or on the road. 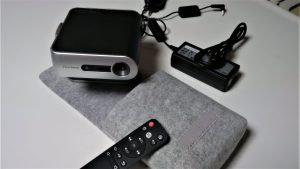 The M1+ projector from ViewSonic, with carrying case, remote control and charger.

Some projectors in the category (pico is a very small metric fractional unit that denotes one trillionth) can almost seem too small and float-y; they can sit in the palm of your hand with less than a pound of weight. But the M1+ feels more capable than that. This ultra-portable WVGA LED projector weighs almost a kilogram, and its square shape — about 12 by 12 cm., or five by five inches — and stylish silvery finish gives it a more substantial form than many others in its class.

One of its physical features is the 360-degree swivel stand or arm, which swings out from the unit to support it at pretty much any angle you might need.

When closed, the stand acts as a lens cover, protecting the front of the projector. Once the stand is rotated for use, the projector automatically turns on and is ready to go (be ready for the light to come on, by the way: it can catch you or another person in the room off-guard by shining brightly even while you’re just putting the projector on a table or nearby surface). The unit does have a safety auto-off feature that powers down the lamp when the stand is rotated to the closed position, or when another object is detected too close to the lens. 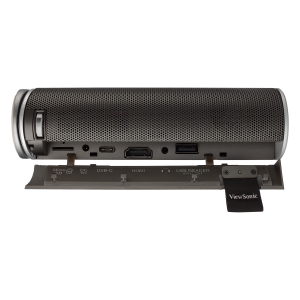 Look and feel aside, this projector delivers enough brightness and plenty of sound for a battery-powered device. Rated at 300 lumens, its 10-watt LED delivers a good picture with decent contrast in dim or darkened rooms, and a reasonable image in small illuminated settings. The LED (it is not a lamp; there is no replacement) light source is rated for up to 30,000 hours use by ViewSonic.

At home, with the lights down and shades drawn, the M1+ can project movies on a nearby white wall (or even the ceiling) that look really good, with dark black areas and rich, saturated colours. Even in a small office or business setting, say in a team meeting among four or five people, the unit is capable enough to present a visible image while coworkers take notes or refer to other printed materials.

The unit has a fixed lens, so no zooming the picture in or out to make it larger or smaller, but its short throw configuration means you can get a large image in a small space.

Projected images roughly 100 inches across come from just 2.5 metres away or so and at its minimum projection distance, about one meter from a surface, the image is still almost 60 cm. across. The projected image is a native 854 by 480 pixel size; that’s compatible with if not exactly the same as full 1080 16 x 9 HD.

Larger in a way than the projected image is the projected sound from this device: the dual 3W internal speakers are loud: with a menu-controlled volume setting available up to 20, just three or four was fine to fill a standard living room!

There are preset soundscapes available from the projector’s sound system menu, and you can choose a bass boost, instrumental or movie mode to shape the sound as needed.

So while it is a good projector, this unit’s sound system makes it a good boom box, too: the advice here is not so much what to listen to, but to turn it up while you’re listening. 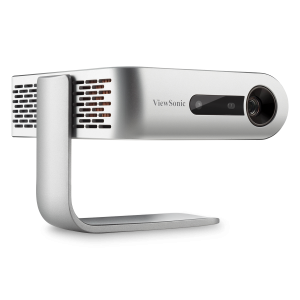 One of the projector’s physical features is the 360-degreee swivel stand, which swings out from the unit to support it at pretty much any angle you might need.

And place an object (the M1+’s included remote control is handy enough) in front of the unit’s auto-off sensor to save the lamp and battery, and rock on!

The remote, of course, presents dedicated functions and features beyond physically blocking the auto-off sensor:  most controls and advanced are accessed through the remote and on-screen menu display, even though there are four physical multi-control buttons on the back of the projector (power, left/right arrows, mode/enter, etc).

The remote itself is a little sensitive: it needs to be pointed directly at the projector and you get the best results from the front. Button pushes from other angles may not always register, but there is an audible click to confirm remote control selections when they do.

One of the big selling points for this ViewSonic projector is its integrated Wi-Fi connectivity option for streaming movies, videos and other multimedia content from providers like YouTube or Spotify. The projector’s menu has an App centre selection and a link is there to the Aptoide marketplace of Android-based apps, where movie, music, TV and sports-centric streaming services or channels may be found. 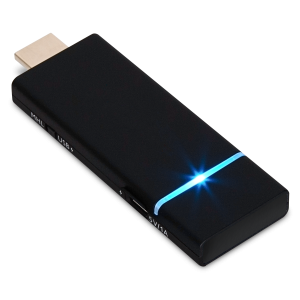 Some users find this particular app store a little meagre at present, and its navigation could use some work, but additional media and other apps (there is one to learn more about projectors) are available.

The M1+  supports third-party dongles for wireless streaming, by the way, like the Amazon Fire Stick and the company’s own offering: the ViewSonic VC10 ViewConnect device streams full 1080p content wirelessly with a data transfer rate of 150o Mbps at 20 Mhz or 300 Mbps at 40 Mhz (no specs could be found for the M1+’s integrated Wi-Fi set).

The unit’s Wi-Fi setup process is a very familiar one: in the menu’s Settings selection, choose Network Settings and a list of available networks pops up; personal networks are easy to log onto; corporate or free networks may present port blocking issues so check ahead if possible before starting an important meeting or presentation if it needs an outside connection. 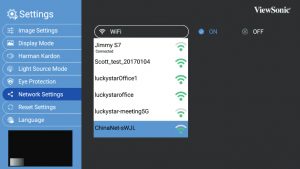 The M1+ Wi-Fi set-up screen is very familiar in look and feel.

(Interestingly, there is an error message that pops-up if projector cannot make a Wi-Fi connection. In one such case, the message said the issue was “…on our side” and encouraged a retry later: that’s an admirable admission if not fully actionable message.)

The projector does support wireless screen mirroring with compatible devices, so you can use a smartphone or PC that’s capable of USB Type-C video streaming as a media source (or by transferring files to a memory card or stick or the unit’s 16 GB of internal memory).

In those cases, be sure and read the projector’s instruction manual carefully: there are several on-screen controls and menus for sequencing media file playback and controlling the content in other ways.

The HDMI input means the projector can be hooked up to computers or other HDMI-enabled devices; one interesting application this opened up was connecting a Blackmagic Pocket Cinema 4K video camera; the camera shot — not at full res, of course — could be easily shared in this way and seen on-set by more than just the camera operator.

So there’s several ways to get multimedia content into and projected out of the ViewSonic M1+ ultra-portable, and with its built-in battery and super-fast set-up, you can be showing and sharing very quickly in many different presentation environments. Just swivel the stand and unit into the best position, and away you go: the M1+ even has an auto-keystone function which detects the surface you’ve pointed it at and frames up your image right away.

That and the cool quiet fan operation gives the M1+ a small physical footprint even as it delivers a big sound and clear image.

Available in Canada at online prices ranging from $380 to $420 or so, the M1+ is a pico projector option well worth looking at. 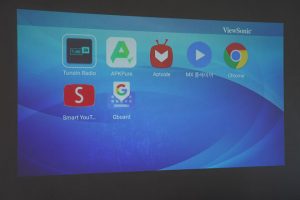 A sampling of the downloadable apps for the M1+ projector available through the Aptoide marketplace includes popular streaming media services.

What Are The Most Hackable Tech Gifts?