The Consumer Electronics Show (CES), the annual tradeshow for the consumer tech industry, kicks off every year in early January. Alongside millions of square footage of exhibit space, including both established companies and start-ups, there are press conferences, keynote speeches, and seminars discussing what the year ahead might look like in tech.

After attending this year’s event, here’s a look at 5 big technologies and innovations that will shape 2020 and beyond.

As different network providers roll out their 5G networks this year, offering lightning speeds that are 10 times quicker than 4G along with low latency and high capacity, manufacturers release 5G-enabled smartphones and other devices, and we adopt more connected devices in the home, 5G will become a critical driver. According to Cisco, more than 500 million Internet of Things (IoT) devices will be connected to the Internet over the next decade as we close in on 2030.

While 5G has plenty of benefits for everyday consumers, including facilitating smart home devices and future-forward technologies like virtual reality (VR), it is on the business and infrastructure end that we will see the biggest changes. Nonetheless, it all begins with phones, and the Consumer Technology Association (CTA), the organization that produces CES, forecasts that shipments of 5G handsets in the U.S. will rise to 20.2 million this year, up from just 1.6 million in 2019. And they predict that 5G phones will surpass 4G by 2022 at 106.3 million shipped versus 62.8 million. 5G will see its benefits realized in everything from smart cities to smart farming, and with everything from remote surgeries in health care to drones that can help streamline crop management for agriculture.

This year was all about artificial intelligence (AI) and its role and integration with just about every device we have in the home, from our security cameras to our televisions, appliances, streaming services, gaming devices, and more. During a Top Tech Trends to Watch keynote, the CTA’s Director of Research

Lesley Rohrbaugh suggested that, in the future, it wouldn’t be so much about connecting devices in the home as having a connected home, period. This includes fixtures like faucets and even smart roofing and walls. Throughout the show, AI of all kinds was demonstrated, from the obvious robots to the less obvious smarts in the latest consumer gear.

LG’s framework for AI, which the company outlined during its press conference, starts as simple as automated devices you can interact with via voice control, like smart speakers, right up to an experimental learning phase whereby AI can make hypotheses and seek out new information, essentially becoming a virtual scientist that can serve you better and in a more personalized way. 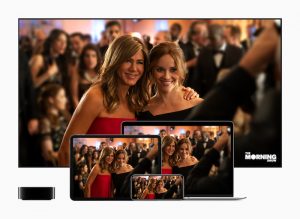 Apple TV+ is offering a slate of hot original programming, including The Morning Show, which features a star-studded cast

While CES was full of new products, the hot topics centred around software and content, including streaming television, music, videos, podcasts, and other related services. It’s no surprise since new streaming services recently hit the market, like Disney+, HBO Max, and Apple TV+, with others on the horizon, like Quibi, which will offer up quick “bites” of entertainment in the form of short videos to be consumed via mobile devices. Meanwhile in music, services like Spotify, Google Music, and Tidal, reign supreme along with additional new hifi offerings. Steve Keonig, Vice President of Research at CTA said during their keynote that, in the U.S., we’ve already seen almost US$17 billion spent on SVOD services this year.

Alongside this trend will be the products used to consume the content. For video, that largely includes the latest and greatest 4K and 8K TVs as well as smartphones and tablets. For music, that ranges from true wireless earbuds boasting new features like 360-degree sound and longer battery life, to sophisticated in-car entertainment systems and Bluetooth streaming speakers. 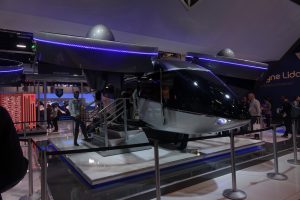 Automotive tech has become a show within a show at CES over the past few years, taking over the entire North Hall of the Convention Center. This includes high-tech, sleek, futuristic vehicles, new electric and autonomous cars, and even flying taxis. Hyundai showed off its version of a flying “car” in partnership with Uber that could take people on short-haul flights to and from destinations using airspace instead of sitting in congested traffic. We really are delving into full Jetsons territory! 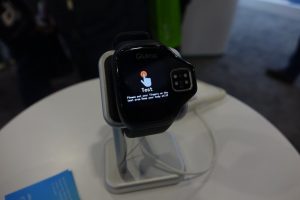 As always, fitness, health, and wellness tech were dominant themes at CES. Alongside the typical smartwatches, high-tech exercise equipment, blood pressure monitors, and more, some particularly interesting trends emerged. Sleep tech seems to be a rapidly growing category suggesting that we as a society simply don’t get enough of it, or at least of good quality sleep. Products like smart pillows and other technology to help prevent snoring were also in abundance. Another trend was devices that focus on continuously tracking and/or monitoring specific things beyond activity, heart rate, and sleep, like blood glucose level or heart afib. Hearing aids are also getting a revamp to be sleeker and app-controlled, designed to resemble true wireless earbuds instead of the bulky and unattractive hearing aids of yesteryear.

CES 2020 showed that there is plenty on the horizon to get excited about for the new year and beyond, across every facet of the industry.