From the Polar Bear Capital of the World comes good advice: always be aware of polar bears!

That warning was issued just this week in Churchill, Manitoba, with word that a bear was spotted on the Churchill River about 20 minutes away from town. It’s aurora season up there, not quite polar bear season yet, but things are changing all over the planet and people need to be aware of what those changes could bring.

In Churchill, they issued a helpful warning. In Longyearbyen, Norway, the reaction to a polar bear near the community was much stronger: the animal was shot dead by police. 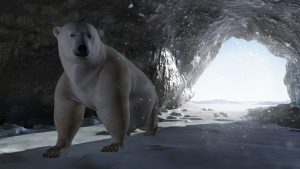 Internationally, polar bears are listed as a vulnerable species by the International Union for Conservation of Nature. In Canada, polar bears are considered a species of special concern under the National Species at Risk Act. Both Manitoba and Ontario consider polar bears a threatened species under provincial legislation. Image from the Polar Bear AR experience and Avara Media.

Polar bears can be seen as beautiful creatures worthy of support and protection; they can also be seen as a dangerous nuisance that must be eliminated.

To help clarify the situation, scientists, environmentalists and digital media content creators believe that information and understanding can be helpful. A better sense of what we all might to do help protect polar bears and reduce the risks associated if we encounter them is an empathetic approach beneficial to both parties. Some people think technology, and in particular augmented and virtual reality applications, can help boost that approach.

To the folks at Toronto-based Avara Media, polar bears are not just worth empathizing with, they are worth helping out with a cash donation, as demonstrated in a new augmented reality app the studio has released. 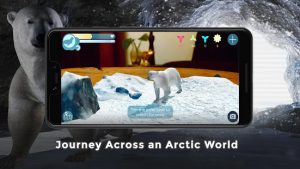 Avara’s Arctic Polar Bear app delivers an interactive gamified role-laying experience that rewards users with tokens for “positive user behaviour” and their ability to help the animated bears find food; nurture their cubs; maintain a clean den and appropriately get rid of plastics and other garbage from the immediate environment.

What is it like to hunt for seals on the harsh sea ice or snuggle with those cubs inside a den made of snow?

It is real-life scenarios such as these that augmented, or virtual, reality content can recreate for us. The Avara app lets users interact with polar bears (safely) and explore their beautiful habitat (warmly) as it simulates life on Devon Island, Nunavut.

Yes, there’s that fun gamification aspect to the app, but important climate crisis information that corresponds with stated U.N. Sustainable Climate Goals, as well as descriptions of the known factors that impact Canada’s delicate northern environment, is shared through in-app information resources and links to external sites like PBI. 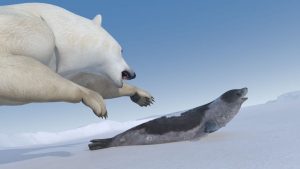 What is it like to hunt for seals on the harsh sea ice? Polar bears know; can AR users learn or empathize with the reality they face? Avara Media app image.

“[W]e’ve created an immersive and engaging experience that allows users around the world to explore the Arctic and learn about the challenges polar bears are facing in our current environment,” said Vikas Gupta, CEO of AVARA, citing the “magic” of augmented reality. “This is a beautiful and important experience that blends entertainment and education. We’re delighted to work with Polar Bears International to raise awareness about polar bears and climate change, while helping to empower a global audience with sustainability efforts towards a healthier planet.”

Although it’s a sometimes controversial and debated subject, some producers believe that deeply meaningful AR/VR experiences can trigger a human reaction of empathy with “the other” — be that other a bear, a Syrian refugee or a woman struggling with motherhood, childbirth and abortion.

When we try to understand what goes on in the mind of the other, when we put ourselves in the “real” reality they face, we are entering into that empathetic process. Social psychologists and neuroscientists talk about the measurable reactions in our brains that come when we mirror an action we see being performed by another. 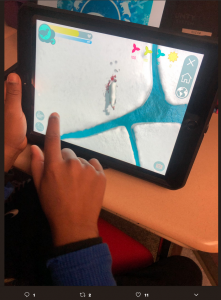 “We fell in love with polar bears all over again…” tweeted the young students in Ms. Reid’s North Carolina classroom, after playing with and learning from the Polar Bear augmented reality experience. “Our favorite parts were naming our cubs and trying to catch seals,” the @ReidsReaders class posted on its Twitter feed. 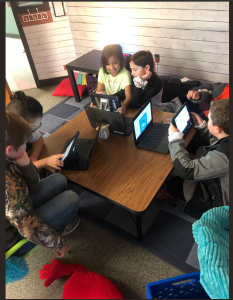 The notion that AR and VR content can trigger an empathetic reaction was perhaps first explored and described by media producer Chris Milk in a TED talk from 2015; he shared what was then a groundbreaking VR program called Clouds Over Sidra that put users alongside a young girl living in a Syrian refugee camp.

Since then, many media producers have turned to the AR/VR platform as a way to create immersion, emotion and empathy in a viewer or user. At the facilities of Sheridan College’s Screen Industries Training Centre, known as SIRT, the mission is to more fully understand and advance these platforms and their abilities.

In addition to the Polar Bear app, they have developed an Endangered Species series that lets users learn about and interact with remarkable animals in their natural habitats, including the Sumatran Tiger, Pantanal Black Panther, and Scimitar Horned Oryx. 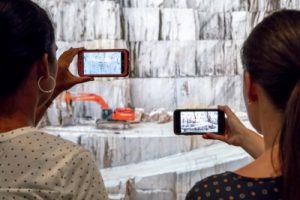 Avara Media has also created highly realistic AR experiences as part of The Anthropocene Project, an exploration of human impact on the planet and its environment.

Using Burtynsky’s incredible large-scale photographs of nature and the environment, these incredibly detailed AR experiences stitch together thousands of high-resolution images, using proprietary software, to generate an immersive AR object or image with astounding visual fidelity across a 360-degree field-of-view. 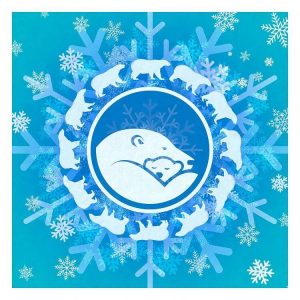 Such AR experiences can be enjoyed anywhere, anytime, by downloading the Avara trigger; the latest app and update including those developed in collaboration with Polar Bears International are on Google Play and the Apple App Store.

That should leave plenty of time to become empathetic when, on February 27, International Polar Bear Day is observed.

Health Tech for an Aging Population

Android Apps to Organize Your Life