The reality around Mastercard is rapidly being augmented: Described now as a technology company, it has dropped its name, recorded a new sonic sound brand, launched an augmented reality app and been awarded nearly $50 million to build a cybersecurity centre in Canada. 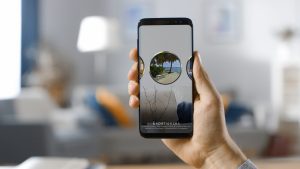 Digital developments have moved Mastercard to embrace a new multisensory brand with logos, sounds and a new augmented reality app.

Digital developments have moved the company to embrace a new multisensory strategy and a brand that abandons words in favour of logos, sounds and apps. Mastercard continues to evolve its brand, so ‘financial services company’ or ‘credit card company’ does not fit the broader identity of a technology company.

The word Mastercard has been eliminated from the corporate brand (but those two familiar coloured circles remain) in many situations. Text seemingly has the least value online, particularly when interacting with voice-activated technologies like smart speakers, so a new sonic brand has been created that will audibly greet shoppers and credit card users in the digital domain.

Voice shopping, as its called, is set to reach some $40 billion (USD) in the next two years, and Mastercard wants a piece of the action.

“Sound adds a powerful new dimension to our brand identity and a critical component to how people recognize Mastercard today and in the future,” said Raja Rajamannar, corporate chief marketing and communications officer. “We live in a time where, increasingly, we communicate not through words but through icons and symbols.”

Nevertheless, the company will soon launch what it calls the “first smart speaker skill” — apparently, that’s the ability to say “Open Priceless Experiences” to an Alexa-enabled or Google smart speaker in order to access another new Mastercard feature: the opportunity to purchase high-end products, services or experiences that have been developed as part of the company’s new Priceless.com shopping site.

Also expected to launch soon is Mastercard’s new augmented reality (AR) app, developed to let cardholders see, explore and make use of the benefits that come with their card. After downloading the app, users scan their card to start the session and see virtual portals corresponding to different card benefits. 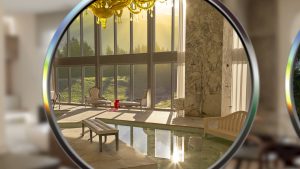 A visit to a virtual spa, using the new Mastercard augmented reality app, is used to describe cardholder benefits and user bonuses.

Photo-realistic virtual environments have been created to help bring card benefits to life, positioned in one of the three portals where discounts, safety services and other cardholder benefits are described when the user clicks on various visual objects in the virtual environment.

Interestingly, initial ideas for the customer engagement app came from company employees in this country, described Shawna Miller, Vice President, Marketing & Communications at Mastercard in Canada, in an e-mail exchange with WhatsYourTech.ca:

“Members of Mastercard’s North American marketing and communications team in Canada created the idea for an AR app to bring card benefits to life, and they had the opportunity to work on and develop the app with colleagues across North America and globally,” she explained. “Throughout the year, there are various opportunities and innovation challenges where employees can submit ideas. Whatever the innovation, the end goal is to benefit cardholders. In this case, the innovation challenge was open to all employees, who were able to submit ideas that spanned across all categories.”

More telling however is another study finding: the educated consumer will spend more. 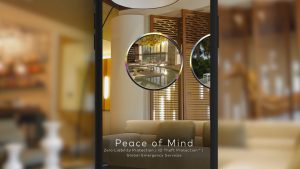 Cardholders who understand and take advantage of the benefits available to them will spend an average of $307 more per month than those who do not fully understand their rewards ($1,291 vs. $984, respectively).

At a time when credit card customers are driving up credit card debt to an all-time high, that may or may not be a desirable social or financial outcome. But credit card issuers see the unique benefits they offer as a key marketplace differentiator.

“The average credit card customer today has roughly 16 different benefits available, yet only about one-third of customers say they completely understand all of the benefits available to them,” said John Cabell, Director, Wealth and Lending Intelligence at J.D. Power. “While the last several years of rewards-based competition among issuers has served to steadily increase overall customer satisfaction, issuers may have wrung all of the value they can out of this approach. They should now turn their attention to communication to help customers extract the full value from their products and buttress themselves against competition from a growing crop of rivals.”

Mastercard says its augmented reality app will be available in Q2 2020 in the U.S. through the App Store, with additional regional services and compatible devices coming later in the year. Miller did not have an exact date for availability in Canada, but she did say the app can be white-labelled for Mastercard’s issuing partners and customized for their cardholders here.

No matter where, credit card issuers have fallen victim to severe high-profile data breaches lately, but reports indicate that has not yet had a major negative effect on customer perceptions of security. More than half (52 per cent) of customers say they “strongly agree” that their credit card issuer protects their personal identity.

That’s up just slightly since 2018, but credit card companies – and particularly, Mastercard – hope consumer confidence increases even more in the future.

For Mastercard, that’s because it has also announced a $510-million investment (CDN) to establish a new global Intelligence and Cyber Centre in Vancouver.

The Government of Canada is investing $49 million to support the project, for which $420 million is also eligible under the Strategic Innovation Fund. 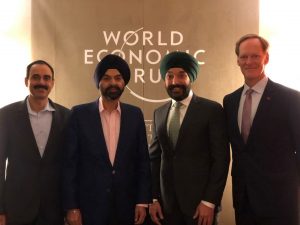 Work at the facility will focus on technologies and standards to ensure that any device that connects to the Internet—phone, tablet, computer, vehicle—can be used safely, without concern that personal and financial information can be stolen.

The project will support 380 jobs and enable the creation of 100 new co-op positions, company and government officials announced, adding that a collaborative approach with government, business and academia will be used to develop cybersecurity software and technologies for organizations of all sizes.

Even without Canada’s financial assistance to the company and its project, Mastercard’s size is plenty significant on its own: the company reported revenues of $15 billion (USD) in 2018, a 20 per cent increase over the previous year.

Most Intriguing Laptops So Far For 2020