The NBA Finals start tonight. Lord Stanley’s Cup was handed out this week. Baseball has thrown the first pitch in a competition leading to the World Series.

At least, I think that’s all true. There may be no way to be sure.

It seems that technology is being used in ways we could never have imagined. In one of the strangest sports seasons ever, one of the biggest sports plays is not even real: high-tech tools, in particular virtual and augmented reality techniques and technologies, are re-creating sports.

It’s not just the games that are being changed – it’s the fans and even the athletes, too!

One of the first and most controversial uses of technology to supplement or enhance popular sport during the current corona virus pandemic took place back in April or so, when sports fans in Asia were still under lockdown: baseball (specifically, the Chinese Professional Baseball League) started up again. 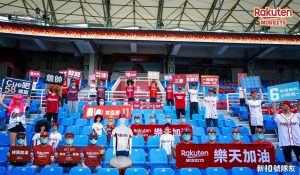 With no fans allowed in the stadium, one sports team decided to use robotic mannequins as substitutes by dressing them up as fans. Rakuten Monkeys image.

With no fans allowed in the stadium, the Taiwanese team decided to use robotic mannequins as substitutes in the stands: the Rakuten Monkeys dressed them up as fans, gave them supportive signs to hold, and then put them in their seats.

The fact that some of the robots could also be called “sex dolls” did not really help matters, but nevertheless it soon led to thousands upon thousands of cardboard cut-outs being used in stadia across North America, Europe, and elsewhere, each one with a photo blow-up of an (apparently) real fan.

But hey, tech can do better than that!

In May, a Dutch pro soccer league began playing matches again, but still, no real fans were allowed to attend. But as many as 10,000 could log into the match and take their seat in “virtual stands” created by a giant video screen (some 40 metres long!) and some technical collaboration between the club, its home stadium operators, and the video conference company Zoom.

In true sporting fashion, a smaller screen was available for fans of the visiting team.

It’s September now, and most North American fans are still unable to physically attend games, but that won’t stop basketball from letting them “inside the bubble.” 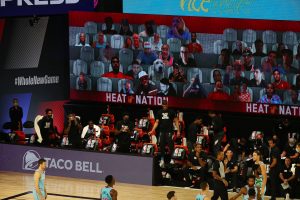 In collaboration with Microsoft and Michelob Ultra, real fans can register for virtual seats at the games, taking their virtual place on giant 17-foot video boards surrounding the court for each game. NBA image.

In collaboration with Microsoft and Michelob Ultra, real fans can register for virtual seats at the games, taking their virtual place with more than 300 other NBA fans (U.S. residents only) on giant 17-foot video boards surrounding the court for each game.

But the NBA had to release a ten-point primer on How You Can Take Your Seat, and the first one requires you to download the Microsoft Teams app and login with your username and password.

The NBA uses Team’s new Together Mode to digitally bring remote spectators into the same virtual sports arena, kind of like a video conferencing tool brings remote workers into one virtual meeting room.

Do Athletes Get Paid, Refuelled, or Rebooted?

Technology is also being used to gather virtual athletes together in competitions that cannot otherwise happen, like the Boston Marathon.

This year, for the 124th running, virtual marathon participants could log their time by independently running a course of their choosing, but in the near future, technology may make it possible for runners to come together safely on a VR marathon course from anywhere in the world.

This year, a new virtual Boston Marathon mobile app and web platform were developed and made available to registered participants. But anyone could virtually run by completing a full 26.2 miles in six continuous hours or less (for juried competitors, proof of timing was required, such as by using their smartphone’s GPS tracker, a wearable device like Fitbit or directly through the Marathon app).

The app included tools so that spectators, or friends and family, could track their favourite participant’s virtual progress. The map would indicate on a Boston city street map where the virtual participant would be on the actual course.

The virtual race itself was complemented by a series of virtual events including exclusive panel discussions and interviews with champions, as well as a downloadable Boston Marathon toolkit with a printable finish line, winner’s break-tape, and more.

But if running is not fast enough for you, if a marathon is not virtual enough, if you think athletes are both overpaid and under-performing, well head on down to the Indy Speedway.

The next race will not feature humans!

Souped-up high-tech race cars will reach speeds of up to 200 miles per hour as they hurtle around the legendary Indianapolis Motor Speedway.

But they will be autonomous vehicles, and the drivers will be computers.

There will be no human beings behind the wheel; instead, onboard computer systems running deep-learning software will control Indy-type race cars. IAC image.

The Indy Autonomous Challenge will be “an opportunity for competing university computer science and engineering teams to push the limits of current self-driving car technology”, according to planners.

There will be no human beings behind the wheel; instead, onboard computer systems running deep-learning software will control the vehicles, telling them where to go and what to avoid.

The race cars will have advanced sensing systems, including video cameras, radar, and Lidar systems, all used to measure, map, and generate 3-D images of the immediate environment.

A team of researchers from Clemson University will set the specifications for the modified Dallara race cars that all competitors will use, such as engines in the 400-horsepower range and several on-board batteries to power the various sensors and computing devices.

It’s all very sophisticated stuff, but even the engineers acknowledge that most Lidar systems can’t accurately scan environments fast enough for the extreme speeds these cars can travel.

Sports fans have known for a long time, long before COVID, that as fun and exciting and social as attending a live event can be, the game may still be better on-screen: the added value in detailed close-ups, multiple replays, comprehensive statistics, and other related content that can be presented during a sports telecast often far exceeds that of going to the game in the first place!

It may not be such a big deal if fans do not go to “the show” after all; technology can make up for it. Virtual fans can chant and cheer in unison, their faces on the big screen, their voices on the in-stadium sound system. Lost ticket revenue will eventually be replaced by online subscriptions, pay-per-view events, fees-for-added-services, and a cut of the online wagering.

What will take a little more getting used to is, well, how do we settle the arguments about what “really” happened on that goal, or was the runner really out, or is the game really a “game”? 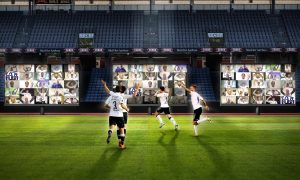 Reviewing the Google Pixel 4a