They were rescued this time.

That makes this particular story of how two men and their vehicle fell through the ice a happy one, but sadly, that’s not always the case.

Long a hazard for the residents of Canada’s Far North, these days thinning sea and river ice is only more common as climate change wreaks havoc with the planet, and especially the Arctic.

The Arctic is warming twice as fast as anywhere else on Earth. That means the Arctic Archipelago, a chain of more than 36,000 islands in the Arctic Sea that makes up much of Canada’s northern territory, is a very dangerous place.

Job one is not falling through the ice.

It’s been the generational practice of many northern hunters, travelers, and trekkers to use a harpoon to jab the ice in order to determine its thickness and judge whether it can safely support a man, a dog sled, a snowmobile, or an automobile.

If the ice seemed too thin, the hunter would make mental note and then verbally share the potentially life-saving knowledge with others. 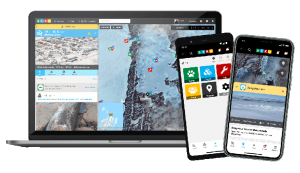 Nowadays, there’s an app for that.

Hunters can make note of dangerously thin ice and share its specific location and other relevant details using their smartphones and a new app called SIKU, the Inuktitut word for sea ice. Along with a host website and companion social network, the project is more formally known as SIKU: The Indigenous Knowledge Social Network.

That’s because the app, while it does offer tools for weather and ice safety, is also a platform for knowledge transfer and language preservation, reflecting a desire by elders in the community to be able to document and share oral history with youth, while letting young people get extra value from technology they are already using.

Candice Pedersen is a member of the SIKU Team, based in Cambridge Bay, a small hamlet on Victoria Island in Nunavut. She spoke to the overall use and familiarity that Inuit youth have with smartphones and apps, and how SIKU fits right in:

“Inuit youth are like young people everywhere. We are on our smartphones a lot. We’re sharing our stories, messaging with each other, sending photos, videos, and memes,” Pedersen described. “We’re living with instant information in small chunks all the time. [SIKU] allows us, with a few clicks, to capture our data every time we go hunting, or are on the land, and gradually build up important data sets, which we have complete control over.” 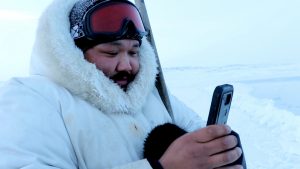 She’s referencing the unique approach to privacy and data stewardship embedded in SIKU, which lets Indigenous users retain all rights and control over their data and intellectual property. They can choose how to share their information on a post-by-post basis.

So the app lets hunters share information about dangerous and changing ice conditions with their communities in their own language. In fact, the app has built-in word profiles for wildlife, sea ice, and traditional place names in multiple dialects.

In addition to the information that hunters can post, the app also provides access to publicly available government and agency data, such as tide cycles, marine forecasts, and satellite imagery.

The app can be used to monitor current conditions in real-time, but also to gather long-term data used in planning for what’s clearly an ever-changing future.

In a video post described by SIKU, a hunter named Iqaluq points to the sea ice around him and explains that this past year, the sea ice was different because abnormally warm weather prevented it from getting thick enough. He’s speaking in his native Inuktitut. 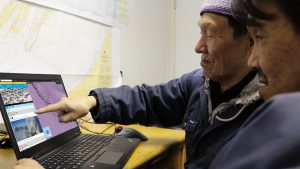 Elder Jimmy Iqaluit and hunter Johnny Kurluarok review posts on the SIKU online platform as a part of the app’s development. Image courtesy of SIKU.

Iqaluq’s observation is testimony to a widely-observed phenomenon. This year, due to intense summer heat, sea ice in the Arctic melted to the second-lowest extent on record.

The Arctic Eider Society, an Inuit-driven charity based in Nunavut, teamed up with Inuit hunters, elders and youth, as well as software development partners and sponsors, including Google, in the development process.

After winning $750,000 in the 2017 Google.org Impact Challenge in Canada (in partnership with LEAP – the Pecaut Centre for Social Impact) that helped kickstart the project, other funding came from private foundations, the federal government, and regional Indigenous governments.

“The importance of SIKU hit home to me while doing an early consultation workshop with Nunavut Sivuniksavut students,” said AES Executive Director Joel Heath. “One of the youth said, ‘[N]ow scientists will finally believe what Inuit have been saying all along.’ It wasn’t until I heard it worded like that and coming from those youth that I really realized how powerful this approach would be and how it could play a key role in self-determination and mobilizing the quantitative results and analysis that has always formed the basis for Indigenous knowledge.”

SIKU is available as an online platform at SIKU.org as well as a mobile app for Android and iOS. At last tally, it had more than 6,000 users. 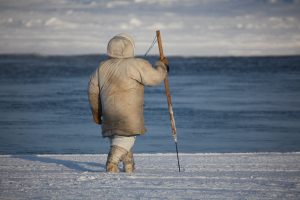 A hunter checks the ice with a harpoon near a polynya, or a stretch of open water surrounded by ice. These traditional tools are still needed for ice safety in addition to the tools and services provided by SIKU. Image courtesy of SIKU.

6 Air Purifiers For Your Home Office