Toronto City Council has approved a plan to create it own broadband network in the city, one that will connect residents to affordable, high-speed Internet services.

By using of some of its own physical and digital assets – and by partnering with an established private sector provider – the city hopes its new municipal broadband network will expand important high-speed Internet access to under-served areas while delivering reliable network capabilities to business and individuals.

We’ll find out by the end of the year how well that’s working, at least for those areas targeted first in what is called the Connect TO plan. 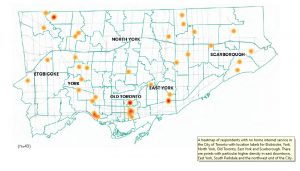 Toronto hopes its new municipal broadband network will expand important high-speed Internet access to under-served areas of the city, as shown on this map.

After a report back to Council at the end of the year, Phase 2 of the project included plans to have the network launched city-wide, starting in early 2022.

“Once launched, the ConnectTO high-speed network will become a vital tool in ensuring equitable access to information, resources, educational tools, social platforms and City programs and services,” described Toronto Mayor John Tory. “I am delighted that this project is moving forward, and the City will be leveraging our existing assets for the public’s benefit.”

For the city staff recommending the creation of a Toronto broadband network, a key component for its success was the use and utilization of existing city assets, including buildings, sidewalks, boulevards, lights and dark fibre, the under- or unused fibre optic cabling that ties together a telecommunications network. 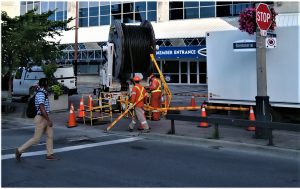 Program managers in the ConnectTO project have already identified both dark and lit fibre that might be used in a municipal broadband network. Photo by Lee Rickwood.

Miles of the stuff is said to be waiting for a paying user – be it originally installed by telecom service providers, government agencies, municipalities, even private corporations with huge bandwidth requirements.

Program managers in the ConnectTO project have already identified both dark and lit fibre from City of Toronto and its various Agencies and Commissions, although a City spokesperson says a more thorough asset discovery exercise is underway.

The program also updates existing City planning, licensing and construction processes so that Internet connectivity considerations are in the mix right from the start, embedded in the execution of various activities like construction work, laying electrical conduits or water pipes, and especially when installing Wi-Fi infrastructure.

The City describes its ConnectTO plan as a collaborative program, noting that services will be delivered to homes and businesses by a private sector partner. The City will offer municipal broadband network access to qualified service providers, at what is called a fair price, in order to generate revenue. Money is to be re-invested into communities to expand service to areas without access and help lower Internet costs for vulnerable Torontonians.

“Having access to a reliable and affordable internet connection is a lifeline for many residents and businesses in Toronto,” Mayor Tory continued. “Without sufficient connectivity, many are left behind by an increasing digital divide – especially during COVID-19, where it has become vital to maintain business operations and access supports and learning. ConnectTO will help to create a digitally connected Toronto, which means everyone can prosper and enjoy a better quality of life.”

Having developed its strategic framework, work plan and implementation for Phase 1 of ConnectTO, City Council said the following actions are also crucial for the project:

A City spokesperson told WhatsYourTech.ca that City staff have been “directed to engage with the City’s tech community, potential end-users, technology access and anti-poverty advocacy groups in information- gathering sessions, to leverage community expertise, prior to the tender documents being finalized for ConnectTO. This work and these discussions are expected to begin next month.”

At press time, the City noted, no private sector partners had been identified as the procurement process still needs to be completed.

Interestingly, as first noted on The DownUp blog, leading ISP Bell has signed up as a lobbyist to the City regarding its ConnectTO plan, seeking, the lobbyist registry indicates, to have discussions relating to the project.

That registration will have no impact, the City says, on project timelines. Bell is not considered part of the tech community, and would not be included in those conversations, the City spokesperson added.

Meanwhile, City Council has direct its Manager to write to the Canadian Radio-television and Telecommunications Commission, the entity overseeing telecom related matters, in order to request the Commission make adjustments to some of its rulings, including one that says super-fast fibre optic network be made available through wholesale network access and set corresponding rates, into effect. 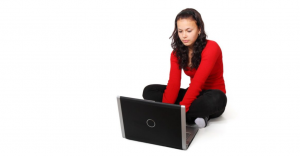 Governments are being pushed to develop affordable Internet access for their citizens, whether by national legislation (such as in the U.S.) or municipal initiatives, such as in Toronto. Image at FAIR.org. This work is licensed under a Creative Commons Attribution-NonCommercial-NoDerivs 3.0 Unported License.

Also, as part of the project, folks in Toronto’s municipal government are reviewing other business models for broadband delivery, including but not limited to non-profits and co-operatives, non-profits (like NYC Mesh and Guifi.net), joint ventures, community initiatives, and public-private partnerships.

Calls for more widely available and accessible Internet are more and more common these days. In the U.S., the Accessible, Affordable Internet for All Act (AAIA) is being pushed by public lobbyists and technology advocates.

An interesting Canadian example of accessible high-speed Internet infrastructure being owned and services offered by a not-for-profit community-based entity like the one running in Olds, Alberta. The Technology Committee of the Olds Institute for Community & Regional Development has laid down a solid technical foundation and business model for a connected community with the development of its Open Telecommunication Network, said to provide state-of-the-art speeds and services at reasonable, accessible prices.

The Latest Premium Smartphones You Can Get in Canada