Even with the future bringing uncertainty as to when, where and how many of us can gather together, personal privacy will still be needed in public and in private, at home and at work.

Having some added peace and quiet would probably benefit us, too.

Anticipating an at least partial return to work in the traditional office environment, a new high-tech product category has emerged to address the expected need for privacy, security and a quiet space to (at least temporarily) get away from it all: the privacy booth.

Ranging in price from a few hundred to tens of thousands of dollars, today’s privacy booth can be custom-built for specific spaces or uses, and some can accommodate more than one person comfortably.

Taking off from the old phone booth (remember the coin-operated phone booth? There’s not many left….) concept from yesteryear, the privacy booth can now be equipped with multiple communications tools and device connections, not just a single hard-wired telephone. Electrical outlets, seating options, design choices, multiple finishes, surfaces and construction materials can be selected.

Some booths come with contagion awareness, too: high-volume ventilation and air flow are promoted as among the benefits.

There’s even a very inviting combination home-office privacy booth, with as many choices for living comfortably and conveniently as are provided for working productively and efficiently. 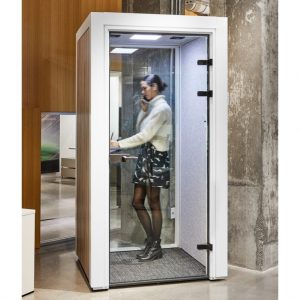 The Canadian-manufactured Mute Box Office Phone Booth is available for a single person or for up to four people. Manufacturer image.

The inviting workspace created by Swedish design firm ÖÖD is an all-in-one option for a home-office environment, one dropped into as beautiful a space (see image below) as possible. The 20 x 20 x 10 ft. enclosed room can be fully outfitted with electric appliances and digital technology, yet its best location is clearly out in nature, away from other homes and offices.

The Canadian-manufactured Mute Box Office Phone Booth by Artopex is designed to be set up in an interior space; it is available in different configurations: Solo for a single person, Collab for up to four people.

The freestanding booth offers acoustic isolation and soundproofing from ambient office noise with its double-glass wall and three-inch air chamber, as well as carpeted interior and felt-covered walls, but it also provides good air flow and ventilation. 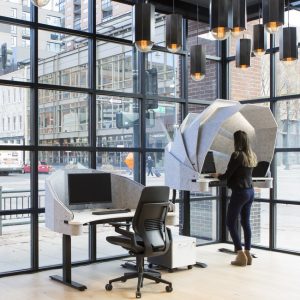 MojoDome: The Open Office is transformed with a sit-or-stand desk with its own adjustable privacy shield or dome. Manufacturer image.

Privacy and security inside the office environment can be boosted with the Mojo Dome, like a basic kind of sit-or-stand desk with its own adjustable privacy shield or dome.

The dome itself is made of polyester fibre with acoustic dampening and noise reducing properties. The dome is deployed electronically, and it can be extended to various heights or levels. Likewise, the work surface can be used at different heights; individually controllable ergonomic and lighting controls are featured in this personal privacy booth or office pod.

Not just the private work space, but also in publicly accessible locations, booths with core privacy functionality are also required, such as in a public library.

Recently installed in the Sammy Brown Library in Carthage TX , for example, is a privacy booth initially developed in response to community needs created or identified during the COVID-19 pandemic.

Local residents needed to communicate online more and more, be it for job search, health care advice, school registration and the like. But many community residents there, as elsewhere, did not have their own computers, broadband connection or even Wi-Fi service, so the public library became their solution. 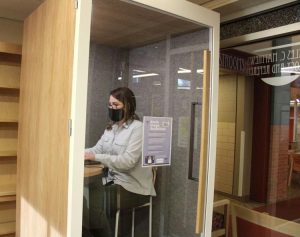 But desktop PCs in shared open spaces were not that conducive to conducting business online, either for the user or other library visitors.

So, with the help of some governmental and institutional funding, the idea of building a soundproof privacy booth, equipped with laptops computers, became reality.

Library Director Kim Turner described the privacy booth as “a standalone structure that provides the lighting, the electrical, the ventilation, everything you would need for a private space to conduct an online meeting, but it’s just in a little private booth.

“We envision this booth being used for online meetings, including those for business or school or most importantly going forward, telehealth visits,” Turner told her local paper, the Panola Watchman.

Several private workspace configurations are available from a company called Room, be it a single user Phone Booth model or an Open Meeting Room and the enclosed Focus Room for multiple users.

Some privacy booth manufacturers will cite acoustic statistics and decibel readings to measure the soundproofing and noise isolation they provide. 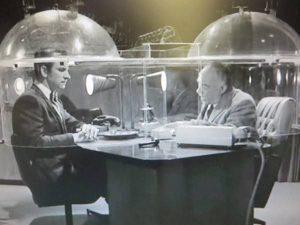 The NBC TV comedy Get Smart! made use of one of the first privacy booths…well, it tried to! Starring Don Adams as Agent 86, left, and Ed Platt as the Chief, top secret agents struggle to hear each other under the Cone of Silence.

But no such tech specs were available for the release of one of the first purpose-built privacy booths: the infamous Cone of Silence.

Apparently, no specs and no user manual were ever written.

The bumbling, stumbling fictional super-spy Maxwell Smart, Agent 86 of CONTROL, and his ever-patient Chief, could never get the Cone to work properly. Well, to be honest, they themselves did not work that properly. In one hilarious Get Smart! sketch after another, the Cone of Silence was deployed in the fight against the evil forces of KAOS, but the technology was always shown to provide no silence, no comfort, no security, no privacy. 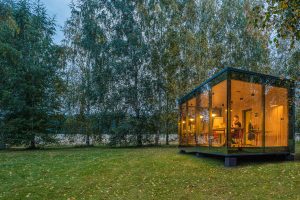 This customizable ‘privacy booth’ from Swedish design firm ÖÖD can be fully outfitted with electric appliances and digital technology, yet its best location is clearly out in nature, away from other homes and offices. Manufacturer image.

Zoom Backgrounds: How To Use Them And Where To Find Them