Knowing the difference between the cost and the value of something has long been a valued skill, or so my grandmother used to say. But ironically, the price of today’s hyper-accelerated, highly mediated, technologically integrated world may be the disappearance of values as a common currency. 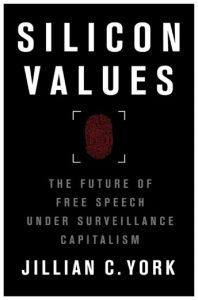 Silicon Values describes the development of a virtual and a physical world in which societal values – expressed as rules, regulations, laws – are created behind closed doors, without public input or approval.

In her new book, Silicon Values, author, activist, researcher and professor Jillian C. York looks at the impact of major technology corporations and how, she says, our values and rights are increasingly undermined by the corporate mandate to turn our personal data into their corporate profit.

With insight, interest and not a little indignation, York fluidly describes the development of a virtual and a physical world in which societal values – expressed as rules, regulations, laws – are created behind closed corporate doors, without public input or approval. There is no democratic participation, no transparency, no due process in the world she describes.

But her world does have dedicated people committed to rectifying the problems she describes, and her book does offer some concrete recommendations for corrective action.

The problem is that today’s Internet is a world where rules are made and enforced by intermediaries: the many companies and giant conglomerates that lie in between the sender and the recipient of a message. Silicon Valley has created a very capable communications infrastructure, but one that is “a system apart”. It dictates its own rules; it has its own mandate. It is unique, distinct and, in fact, quite separate from the shared social fabric that came before.

Big tech has become a kind of unaccountable censor in that way (from their ad hoc blocking or ‘de-posting’ of certain specific content, to their outright banning or removal of certain people who post, to their creation of new rules and regulations about what can be posted and by whom) and they have had incredible impact on those who have been censored.

There’s real societal value in the how and why of human communication; there’s clearly lots of corporate value in setting rules that influence and govern and control how we communicate. Having the ability to decide what we can and can’t say is something we might have once given to our parents, or the teacher at the front of the class, or the church, or the government. But that ability now resides with the corporation, one that has a mandate to profit from its ability. Private companies were built in Silicon Valley, York reminds us pointedly, not civil institutions committed to the public good. 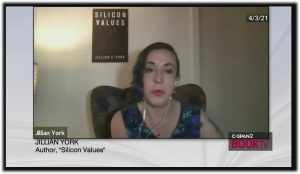 Author Jillian York is the Director for International Freedom of Expression at the Electronic Frontier Foundation (EFF). Based in Berlin, she spoke recently via video conference about her new book, Silicon Values. C-SPAN video still.

Based in Berlin, York is the Director for International Freedom of Expression at the Electronic Frontier Foundation (EFF), a fellow at the Center for Internet and Human Rights at the European University, Viadrina, and a visiting professor at the College of Europe, Natolin.

Her background allows her to reminisce at points in the book, both on the early days of Internet activism and about some of the key people whose thinking informed much of her work today.

It was, coincidentally, almost exactly eleven years ago today that she went to San Francisco to start work at the EFF. It was May 1, International Workers’ Day, and in her writing and speaking, she pays tribute to the many workers, activists and staffers who have for years been trying to hold emerging communications and technology companies accountable.

John Perry Barlow is, of course, cited in her book: he’s one of the founders of the EFF, and his book, A Not Terribly Brief History of the Electronic Frontier Foundation, conveys some of the visionary motivations for starting up an organization that long ago that still seeks to protects us today.

She also cites author Nicolas Susor and his groundbreaking book, Lawless: The Secret Rules that Govern our Digital Lives. It digs deeply into how Internet platforms govern (a word we must not equate with elections or public input), and how our rights are impacted by that governance. York, Susor and others say now is the time for more better regulation of these platforms.

Bruce Sterling is also cited among those people who were excited, but wary, about the early promise of online freedom. Sterling, an accomplished science fiction writer turned technology commentator, is noted for the concept of “spime”, a weird word he coined that mashes up the terms space and time.

Among their many attributes, spimes are objects that can be tracked throughout their entire existence, from an early virtual representation to a fully physical manifestation to an inevitable disintegration and breakdown into raw material; the tracking involves almost any technology, including MRI (magnetic resonance imaging), RFI (radio frequency identification), GPS (global positioning system), Internet search engines, cameras, cookies, trackers and the like.

As York notes, and in her citation of the work of Harvard professor Shoshana Zuboff, powerful tech companies were already doing big business with our data before the current COVID-19 pandemic struck. Now those companies are providing the tracking tools that follow us at school, at work, at home, and even when getting the vaccine. Zuboff is the author of The Age of Surveillance Capitalism, in which she paints her own picture of how Silicon Valley and other big tech companies use our information to predict and shape our behaviour.

Although York says there is no perfect model to address these issues, she does feel strongly that a broader approach to content ownership and moderation, both from a human and a platform point of view, is necessary.

The corporate track record so far shows “there’s simply no reason to trust Zuckerberg and other tech leaders to get these big decisions right”, so York and others propose a customer-powered movement to oversee a new form of ownership of personal and collective data, one anchored in informed consent, achieved through education and transparency

If we fail to consider the problems of the individual versus the corporation as far as decision-making capacities and capabilities go, we miss the societal harms that can come from aggregated data disclosure and collection. Certain elements of data ownership and usage consent, those that intersect with personal and public contexts (like health data), should be put not into individual corporate hands but into collective civic models that give us more control over the data involved or the potential risks of sharing that data.

New data governance models call for a trusted third party to oversee the administration and use of collected, collective data, and York is among those making the collective call:

Austrian online privacy activist Max Schrems has formed a campaign group called NOYB (My Privacy is None Of Your Business), aimed at making it simpler for people to control how companies use their personal information.

And the Father of the Internet, web inventor Tim Berners-Lee is calling for “pods” to be added to his creation: Personal Online Data Stores, where individuals can manage their own data, set their own individual data preferences and gain control or autonomy over the personal data tracking that goes on in public spaces, virtual or physical.

It’s small cost for big value. Values have significant weight in the never-ending balancing act of life. Be they moral groundings or simple price points.

TikTok Gamers Got Talent Competition: Enter by May 2