Along with all those rich executives and aging TV stars playing space tourist these days, the first of many planned ‘ridesharing’ missions will provide a lift to small businesses and start-up companies that want to leave their mark on the cosmos.

SpaceX, of course, is the rocket making company founded by Elon Musk some 20 years ago, also with the goal of reducing space transportation costs but with a specific place and purpose in mind: the colonization of Mars.

GEC’s Geometric-1 will make use of a unique bit of technology, the 12 x 6U CubeSat adapter plate, which allows for several individual but smaller 6U CubeSat projects to be mounted on board and launched simultaneously. 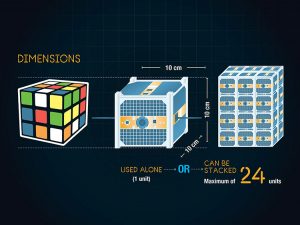 CubeSats can be used alone or stacked to suit the needs of a specific mission. (Credit: Canadian Space Agency)

As the name implies, CubeSats are like small, cube shaped satellites; they can be used alone or stacked to suit the needs of a more demanding mission.

That means GEC, along with its subsidiary company, Geometric Space Corporation, is opening the door to space flight for a diverse group of start-up companies, small businesses, academic researchers, government departments, non-governmental agencies and more.

According to company CEO Samuel Reid, the desired impact of the Rideshare Program will be “to lower the cost barrier for start-ups and smaller budget launches, especially those that help to fulfill our company’s mandate of transforming civilization for the better.”

Reid says expanding access to space is the guiding ideal behind the missions, but he adds that such growth and expansion means “not only ensuring that space missions are financially accessible to even smaller budget projects, but also that we prioritize projects that aim to enhance humanity at large.”

Working with other launch service providers, GEC says it will be offering multi-launch services to customers across Canada and the United States.

GEC is also supported by integration partner Maverick Space, which on the inaugural mission will ensure flight access for several passenger companies already slated to participate, including JRA Holdings, POINTBLANK, and Alpha Cube Sat (ACS), among others.

They represent a wide range of project goals and objectives, anything from supporting geoponics research that advances sustainable agriculture to integrating surveillance and data analytic tools for defence purposes to creating 8K virtual reality content that conveys what is called the Overview Effect, something noticed by previous space travellers as a cognitive, almost spiritual, awakening brought about by gaining a valuable new perspective of Earth, one only possible from space.

It’s also been reported that one of the projects will be to show ads in space.

GEC says one of the cubes will have a pixelated display screen on which paid (the idea is) advertisements, logos, or artwork will appear. GEC’s approach means marketers can send a message from space without actually being there.

The exact size of the screen has not been specified, but chances are it is not large enough to be seen from Earth, not with the naked eye at any rate. Plans call for a camera, mounted on a selfie stick, will be deployed to capture images of the screen; those images will be beamed back to livestream platforms like Twitch or YouTube.

Those wanting to put their ads in space will be able to purchase individual pixels on the screen and set pixel parameters like colour, brightness and duration. Pixels can be purchased with cryptocurrencies, GEC describes.

Reid has been quoted as wanting to “democratize access to space and allow for decentralized participation”, adding that he hopes the ad availability means “people don’t waste money on something inappropriate, insulting or offensive.” 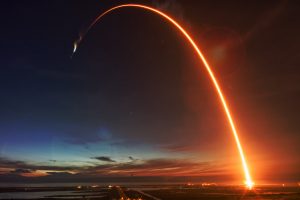 Inspiring the Side Hustle Entrepreneur