The Knowledge Society (TKS) is a 10-month, global innovation program for driven and curious students aged between 13-17. Students engage with a wide range of contemporary topics including VR, AI, cryptocurrency, entrepreneurship, and climate change, while being instructed and mentored by some of the world’s leading experts in their industries.

Acceptance into the Calgary-born program, which is modelled after learning environments from Stanford, Harvard, and MIT, is rigorous and only those youth that want to make an impact in the world are selected. Students meet every week to learn and help design solutions to improve business and society.

The TKS mission is to “help ambitious young people change the world.”

Ahead of Earth Day, I reached out to a few TKS students who are battling climate change and asked them about their world-changing passions. 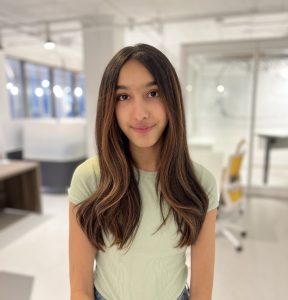 Moloo is 16 years old and in grade 10 at Elmwood School in Ottawa. She is an author, environmental researcher, and, most recently, has learned to code. She endeavours to build better, more efficient solar panels which leverage nanomaterials.

“I am a student with the goal of playing a role in tackling the climate crisis,” shared Moloo.

“My main areas of exploration/research lie in bioplastics and solar panels, and I have recently started coding where I built an algorithm to predict the output of PV systems.”

“Solar’s potential is enormous and if we could get past some barriers, reliance on non-renewables like oil could slowly be shifted toward cleaner alternatives,” explained Moloo.

“Solar cells face a major roadblock with regards to where they can be placed, usually being confined to roofs and as a result, severely limiting their potential for widespread implementation.”

“With my idea for transparent and flexible solar cells, many new applications for this energy source could be unlocked, including bendable electronics, smart clothing, and solar windows,” said Moloo.

“I am hoping to start building this out in a lab during the summer, utilizing silver nanowires for the transparent conducting electrodes. Through this work I aim to bring an accessible and cost-effective design to the world that could virtually be placed on any surface.”

“I feel like oftentimes we take the fruitfulness of the planet for granted,” said Moloo. “Earth Day reminds us that we are degrading and exploiting our natural resources for the gain of individuals. It reminds us there are changes everyone needs to make, and this collective effort is urgent.”

Moloo remarked, “Climate change is the largest crisis that humanity is facing today as it impacts everything — a lot of people only think of the effects on biodiversity, which is a huge aspect, but biodiversity underpins the health of the whole planet.”

“When biodiversity diminishes, ecosystems collapse, and human survival is contingent on these ecosystems. If we continue along this route, then we’ll see lifeless oceans, billion-dollar fishing and hunting industries destroyed, an extreme decrease in food and water supply, and the list goes on.”

“Climate change is important because it is integral to how our future will look, and if we can even have a healthy future, therefore I feel a responsibility to do my part,” said Moloo. “This is why I have the long-term goal of playing a role in helping end our global consumption of fossil fuels.”

Added Moloo, “I love getting the opportunity to spread the word about youth in STEM and have gotten to speak to CTV, the National Post, Ottawa Life Magazine, and the Globe and Mail for my work.”

Moloo has accomplished a great deal at such a young age, including writing, “Chronicles of Illusions: The Blue Wild,” a fantasy novel, and she is working on a sequel when she is not playing badminton, basketball or volleyball. This ambitious entrepreneur has also been recognized as one of WXN Network’s top 100 most powerful women in Canada. 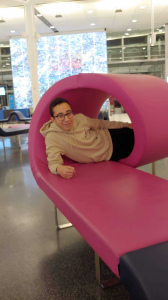 Hassan is 17 and in 12th Grade at Colonel By Secondary School in Ottawa. Hassan is a young entrepreneur who is actively seeking ways of reversing climate change through storing carbon in soil to increase plant yield.

“I started my journey in the Knowledge Society (TKS). It is a program to train the next generation of innovators. Part of the training was working on solving problems for companies in complex industries – anything from big pharma to the energy sector. After going through the repetitions of solving problems, I thought to myself, “what is the most important problem that I can work on?”

“My first instinct was to work on climate change, and this is what I have been doing for the last eight months.”

I asked him to tell me about his work with biochar, private industry, and what he is working on now.

“Normally organic waste, for example crop residue, would be burned for fuel creating CO2 as an output,” explained Hassan. “That creates about 3.5% of the world’s emissions. What you can do instead is heat up the organic waste at high temperatures to create charcoal, also known as biochar.”
“From over 20 years of research data, biochar seems to perform just as well as fertilizer for increasing plant yield. The key advantage of biochar, however, is that it cannot be washed away by rain like fertilizer,” shared Hassan.

“The biggest gap in the industry [however] is that biochar doesn’t scale. The reason for this is that pyrolysis machines are expensive. When I would talk to people about why, nobody was able to give me a good answer. Decreasing the cost of the pyrolysis machines is what people are not working on,” said Hassan.

“Acadium was one of the challenge partners for one of the consulting challenges done by TKS. With TKS, my team and I worked on helping Acadium to increase its user base by over 100,000 people over … six months.”

“Our recommendation led us to learn about many different areas of marketing – everything from website conversion to social media branding, and global expansion. There are a lot of case studies. In the end, our recommendation would increase their conversion rate (from website visitor to user) from 3% to 4.34%, with a customer acquisition cost of under $10 per person.”

“Right now, I am looking into electric heat pumps,” Hassan added. “They are a zero-carbon alternative to A/C units. There are situations where heat pumps are cheaper for consumers than A/C units. I am working on understanding why only heat pumps are not mass-scaled.”

“If you get consumers to install heat pumps instead of current A/C units, you can help them reduce their carbon footprint every time they use energy.”

Hassan has also worked on a variety of projects with great impact, like helping to deploy energy storage for Shell while reducing emissions by over 1M tons of Co2-eq; increasing, with the UN, the number of women and girls in the IT industry by almost 500% in Vietnam; and reducing clinical failure with a proposed solution to save over $40M with BenchSci.

“Earth Day acts as a reminder to everyone how important it is that we change our own behaviors to help reduce our carbon footprint,” remarked Hassan.

When asked if Hassan was worried about Earth, Hassan replied, “I’m more worried about the humans on the earth. I’m working on reducing world emissions to help make sure the potential negative outcome doesn’t happen.”

Advice to Young Changemakers and Entrepreneurs

Both Moloo and Hassan had some inspiring words to share for other passionate entrepreneurs working toward a more sustainable world.

Said Moloo, “Follow your curiosity! If there is something that piques your interest, do research, reach out to experts, and start coming up with ideas to fill gaps in the market. There is so much out there but you won’t know what you love or hate unless you expose yourself to various fields of interest.”

“I actually co-host a podcast called The Curiosity Podcast which is all about exposing younger people to business frameworks and exponential technologies, with the hopes of sparking new passions in the next generation,” shared Moloo.

Hassan’s advice is, “Apply to The Knowledge Society (TKS). There I learned about how to approach understanding and solving a problem. The skillset is so important to make a difference in the world. Without TKS I would probably not be working on helping to mitigate the risk of climate change on a global scale.”

Samsung Ups the Ante in Mobile Tech in 2022