Women are underrepresented in many technical roles that keep business and industry humming.

Making up nearly half the total workforce, women represent only about a quarter of the Canadians employed in so-called STEM (science, technology, engineering, and math) -related positions.

In response, there are many initiatives aimed at removing the barriers to entry and full participation of women – and in fact accelerating opportunities for women – in the STEM fields, including those funded by both public and private sources.

One initiative in Canada, in fact, has been running for five years as a partnership between the United Nations and the global leader in diamond mining, and like the glittering mineral, its influence is meant to be long-lasting.

Starting back in 2017, the De Beers Group, in partnership with UN Women, the United Nations Entity for Gender Equality and the Empowerment of Women, started to roll out a program that saw 72 STEM scholarships awarded to women across Canada, including dedicated programs at the University of Calgary and the University of Waterloo.

As a global #HeForShe champion of UN Women, De Beers Group committed well over a half million dollars to support scholarships and other opportunities to encourage women to pursue education in STEM, an area long dominated by men.

De Beers Group is an international corporation, specializing in diamond exploitation, mining, retail, trading and industrial manufacturing; it is involved in open-pit, large-scale alluvial and coastal mining. It was founded in 1888 by businessman and politician Cecil Rhodes, who also founded the colonies of Southern and Northern Rhodesia. 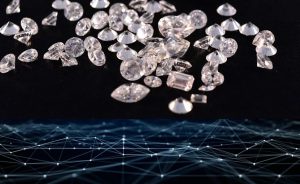 Blockchain technology is being used to create a single, tamper-proof record for every diamond in the Tracr platform from De Beers.

Having basically ruled the sector for more than a century, De Beers is a leader today in the integration of technology into the diamond market, having introduced a blockchain-based method of creating a single, tamper-proof record for every diamond, called Tracr. It’s said to be the only diamond blockchain able to keep track of millions of diamonds simultaneously.

Digital technologies were also used to build Gemfair, a platform now used to create a transparent and trackable route to market for small-scale, artisanal diamond mining.

And now, the company has announced the second phase of the STEM scholarships for women in Canada program is underway, and the application process is open. The three-year, $135,000 program is part of new entrance scholarships being awarded through Scholarships Canada. ScholarshipsCanada.com is part of the SchoolFinder Group, a scholarship resource organization; these particular scholarships are available at any university or college in Canada.

Kayla McNeely was one of six University of Calgary recipients of a De Beers Group scholarship for women (she used her scholarship to support her environmental science studies for the 2018/2019 school year) worked in a summer job at one of the company’s diamond mines.

Applications for the Scholarships Canada program are due by July 31 for enrolment in September 2022; the University of Calgary has its own application process posted on its website.

Moses Madondo, Managing Director of De Beers Group Managed Operations, said when announcing the awards: “Women continue to be under-represented in STEM fields in Canada and around the world. We are proud to have provided 72 scholarships to assist Canadian women advance their education over the past four years. This new program will continue to remove barriers to women pursuing STEM education in Canada, especially for those in our host communities.”

Because De Beers is active in the Northwest Territories, Northern Ontario and Nunavut and working close to Indigenous communities in those areas, it says it wants to help remove barriers to women, especially Indigenous women, living in those jurisdictions. Priority for the awards is given to Indigenous women, and women living in the Northwest Territories, Nunavut and Northern Ontario.

Whether at its operations in the broader mining industry or in their home communities, the company is trying to balance the number of women and men working in STEM and help fill the talent pipeline with women. Summer employment positions for student scholars are encouraged, funding for girls and their caregivers from First Nations communities to help go to summer science camps is available, and the company has implemented First Nations initiatives that focus on youth life skills, mental health and other crucial aspects of well-being in the community.

Located at Kennady Lake, approximately 280 km northeast of Yellowknife in the Northwest Territories, Gahcho Kué Mine was the world’s largest when it opened in 2016. A few years later, a trip to Gahcho Kué made education larger-than-life for four recipients of De Beers Group scholarships for women in STEM fields, all in their first year of studies at the University of Calgary in the Faculty of Science or at the Schulich School of Engineering. 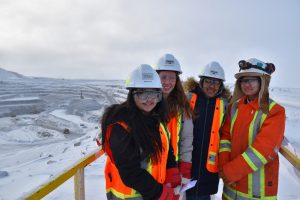 accommodations facility. They also met with members of the mine management team and were able to take a ride in one of the mine’s 200-tonne haul trucks.

De Beers operates Gahcho Kué in a joint venture with partner Mountain Province Diamonds, and together with the NWT Status of Women Council, one of the goals of the Gahcho Kué Mine Building Forever plan is to deliver lasting, positive contributions to the company’s host communities and to align with an internal zero tolerance policy toward gender-based violence. The project lets women put together individualized safety plans in a discrete and safe manner using a variety of print and digital tools, including website resources and an app.

Whether their community benefits from them or whether they work directly in them, STEM-related opportunities in the diamond sector may in the end be more a friend to women than the glittering rock itself, showbiz tunes notwithstanding.

Abridged lyrics from Diamonds are a Girl’s Best Friend

5 Reasons to Get a Tablet

Here Are The Biggest Announcements From Google I/O