Canadian STEM students with federal funding and support are nearing final countdown as they design, build and launch homegrown miniature satellites into space. Known as CubeSats, these small boxes of dedicated technology are key to important space mission projects that help advance scientific knowledge in areas such as climate change.

They’re also a way to promote learning for years to come, and to help prepare young men and women with science, technology, education, and math training for big opportunities in Canada’s growing space sector.

Yet CubeSats are really small: roughly 10 centimetres square and weighing about one kilogram. The square-shaped devices can be used alone or in groups of up to 24 multiple units. Readied for what could be industrial, technological, educational or commercial uses, they are packed with specific project-related technologies (sensors and trackers, cameras 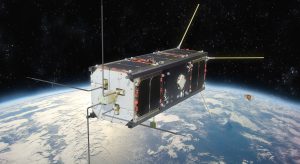 This CubeSat, named Ex-Alta 1, will collect scientific data on space weather with the help of a miniaturized version of a magnetometer. This is an essential tool for conducting solar-terrestrial research in order to better understand solar storms. (Credits: University of Alberta, Andy Kale)

and imaging devices, meteorological tools and so on) as well as platforms for radio telecommunications, computer processing and solar or battery power.

Under the recently announced CUBICS program, for CubeSats Initiative in Canada for STEM, post-secondary students and professors will get involved in real space missions. More than three million dollars in grants from the Canadian Space Agency (CSA) are available to up to 12 teams as they construct an end-to-end CubeSat project or develop a standalone scientific instrument or experiment.

Teams have until November 16 to submit a proposal. Selected teams will be announced next spring.

Once tested and ready for space, their CubeSats will be launched to and deployed from the International Space Station (ISS). The student teams will then operate their satellites and conduct missions, which could last a year or so. 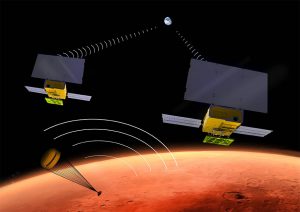 Illustration depicting the future MarCO mission, during which two CubeSats will fly by Mars while the InSight lander is touching down on the red planet. (Credit: NASA)

The CSA contracted with Nanoracks LLC of Webster, Texas to facilitate the launch of the CubeSats. Nanoracks is a private in-space services company; it builds space hardware and in-space tools while supporting experiments and launches of CubeSats to Low Earth Orbit, often on a NASA International Space Station (ISS) Cargo Resupply Mission.

The CSA wants to launch a new CUBICS opportunity every three years to stimulate student learning and develop workers for Canada’s space industry. In a spirit of diversity, equity and inclusion, participating teams must include a meaningful plan to foster recruitment and engagement of members from underrepresented groups, in particular women and Indigenous peoples.

It all builds on a somewhat similar initiative called the Canadian CubeSat Project (CCP), and the lessons learned from it. Under the CCP, 15 teams of students from each province and territory designed and built their own CubeSat with the guidance of CSA experts, as well as representatives from the Canadian space industry. Last June, Canadian students from Dalhousie University and the University of Victoria were the first students from the CCP to finalize the preparation of their CubeSats for launch at CSA headquarters, confirming their miniature satellites qualified for deployment from the ISS. 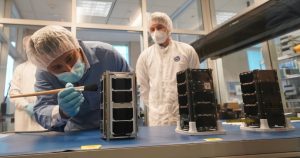 The new CUBICS program reflects the needs of new student teams led by experienced professors, allowing them to develop unique missions adapted to their level of comfort, expertise and readiness.

Individual CUBICS projects can reflect the needs of humans in space overall, such as a project from Saskatchewan that will, in part, test and validate a new type of space radiation dosimeter being developed by faculty at the University of Saskatchewan College of Engineering.

Designed to be smaller and cheaper than current space-grade dosimeters, the new sensor can help protect space voyagers from excessive ionizing radiation.

Called RADSAT-SK, the province’s first homegrown satellite will also have an Earth-imaging camera on-board as the team hopes to capture images of Saskatchewan from space that will be shared with the province.

The RADSAT-SK project is funded and facilitated by the Canadian Space Agency; including Dr. Sean Maw (PhD) and the USask Space Team, it involves a multidisciplinary team of students and staff from both USask and Saskatchewan Polytechnic.

Launch is planned for early 2023, making it the first Saskatchewan satellite to orbit in space.

The RADSAT-SK satellite is designed, constructed, and will be operated by students from both the USask SaskPolytech. The project is so large in scale that the team – some 60 members strong – has faculty supervision that assists with project management and finances, and the team regularly communicates with the CSA and other satellite design consultants. Team members report they are gaining valuable skills and knowledge they could not attain (as students) anywhere else.

“For me, this project has given me the experience that no class could provide,” described third year Computer Engineering student Addi Amaya. “I love the team environment that the CubeSat project has developed with its supportive group to help complete my first real engineering project. Throughout my time as a member, I have learned invaluable skills such as leadership, knowledge of systems, and professional communications.”

Two funding categories are offered to ensure that CUBICS is more accessible for new teams, while still providing stimulating challenges for experienced teams: developing a standalone scientific instrument or experiment (Stream 1) or an end-to-end CubeSat (Stream 2).

Canadian universities and other post-secondary institutions may submit a proposal under either stream. The total funding available is expected to be about $3.4 million. The two funding categories are:

As mentioned, November 16 is the deadline for proposal submissions; selected teams will be announced next spring. 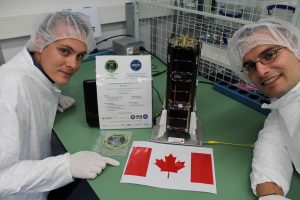 Everything Amazon Announced in September 2022