Oh, right, it’s snowing outside. And I’m on the 20th floor of a downtown condo. In Toronto.

If I was in, say, Vancouver, I’d probably have my ‘za now.

For one thing, there’s less snow (usually). Besides, there they’ve allowed robotic delivery vehicles to do the hot-pizza-to-your-door-thing (as long as your door is sidewalk-accessible). Food inside the robot’s storage compartment is accessed by pre-defined code sent to the customer.

Even in Vancouver, despite some positive field reports and customer feedback, the legislated arrangement that allowed robots to operate on the sidewalk was temporary; folks there will have to get a Pizza Hut delivery from the usual suspects next time. 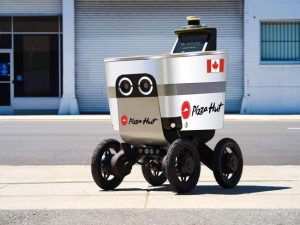 The robotic pizza delivery bots that were used were developed by Serve Robotics, a California tech company building some of the first devices that can navigate fully autonomously in a designated area.

Serve’s key technology partners include NVIDIA and Ouster. The NVIDIA Jetson platform, designed for robots and other autonomous machines, powers the AI computing the bots use to process real-time input about a complex operating environment. Meanwhile, LIDAR sensors from Ouster provide the high-resolution scanning and detection capabilities behind the robots’ driving autonomy.

As mentioned, the pizza bots cannot operate in Ontario (and other jurisdictions) due to existing legislation and some concerns expressed by, for example, advocates for people with disabilities, for whom negotiating crowded urban sidewalks can already be a real challenge.

Pizza Hut Canada said the company only partnered with Serve once the robots had made thousands of injury-free trips; Serve says it is looking to the U.S. market for now.

But driverless grocery trucks are in operation here, operated through a partnership between grocery giant Loblaw and another California autonomous tech company, Gatik.

They are operating fully driverless commercial vehicles on the streets of Ontario. 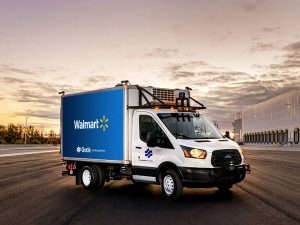 Using 14-foot refrigerated Ford box trucks, regular commercial deliveries are being made between five retail grocery stores and a small fulfillment centre in Toronto’s west end. The short- haul, middle-mile runs are on the same fixed, predictable route every day. (Despite some early reports and initial reactions, the driverless trucks are not being used to deliver groceries to individual consumers, particularly if they’re on the 20th floor. That still requires a human being.)

Along with other retailers like U.S. giant Walmart, Loblaw worked with Gatik and a third-party evaluator to assess the technologies used in autonomous vehicles in real-life and closed-environment scenarios.

The safety and security evaluations that took place before deployment included attempts at hacking the autonomous vehicle by sending degraded or incorrect sensor data, by jamming or spoofing its GPS capabilities, even trying to improperly speed up the vehicle when objects were in front of it.

Testing included the overriding of RADAR and LIDAR data, giving the system false empty road situations to assess its reaction, as well as documenting sensor failures or malicious hacking attempts. Gatik says the tests confirmed that its autonomous technology “does not create an unreasonable risk to the safety of other road users.”

The Ontario Government’s Ontario Vehicle Innovation Network (OVIN) allows commercially available autonomous vehicles on the roads today if they are classified as Level 3 (which requires a safety driver), one of six designations for autonomous driving set by the Society of Automotive Engineers and adopted by various departments of transportation. The levels go from zero (fully manual) to 5 (fully autonomous).

Loblaw and Gatik report they’ve transported more than 150,000 autonomous deliveries (at a Level 3, with a safety driver on board) since January 2020, with a 100 percent safety record. Gatik says its now fully driverless deployment (Level 5 designations) represents the first time an autonomous trucking company has removed the safety driver from a daily delivery route in Canada. 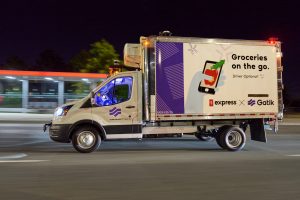 Driverless vehicle usage on public roads in Ontario comes as a result of a pilot program launched by the provincial government. Image courtesy of Gatik.

What is “Career Cushioning?”