Here’s the latest on a Canadian innovation story that made waves in the medical community earlier this year. It comes from Hessie Jones of Due North Communications, which developed the app in question. 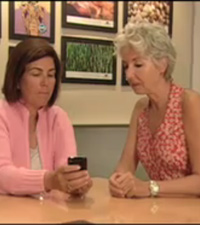 howsthepatient is a mobile app for the iPhone and iPod Touch that allows users to send instant updates on a loved one’s medical condition right from their phones.

It’s the brainchild of Toronto businesswoman, Susan Weisbarth. When it launched in the spring of 2010, it got great attention from the medical community, moms, Canadian technology bloggers and the sandwich generation interest groups.

All this interest came mainly as a result of reading Susan’s story, and the traumatic experience that plunged her into the world of mobile technology. She says: “I got an emergency call that my 75-year-old mother was being rushed to the hospital with stroke symptoms. Fortunately, all that happened was that she fell and hurt her head. As she was recovering in the hospital and I was inundated with calls and e-mails from concerned friends and family, I thought there had to be a better way of keeping people posted when they are worried about a loved one.”

Susan’s hospital experience gave her the idea for howsthepatient, and she soon launched herself into the app development world to make it happen. She is now the CEO of howsthepatient.com.

howsthepatient drew interest from Insights, a series owned by a private studio and production company that creates educational programming for Public Television in the U.S.

Insights was intrigued and approached Susan about developing educational program for howsthepatient for international, national, regional and public television distribution. The result is this commercial video, a real coup for Susan.

The commercial will air on WorldNet Coverage, Public Television affiliates across the U.S. As well as Fox Business Network to include CNN, Fox News, MSNBC, CNBC, Family Net and CNN Headline News starting this month.

It goes to show how far a good idea can travel.