I recently had the esteemed pleasure of making a presentation on mobile technology as part of Pulse Check, during Social Media Week TO. 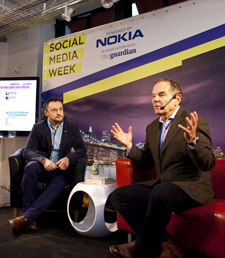 Pulse Check officially launched Social Media Week TO. Here’s its premise: “Pulse Check takes a hard look at the current state of digital and the future of the web. Who is online? What are we doing with the advent of new technology and where are we headed? 10 panelists from 10 industries present a 5 minute candid POV on the status of the Internet through the eyes of their industry. Included in the conversation will be representatives from the Health Care, Finance, Analytics, Family, Mobile, Arts industries and more. Join us for a raw conversation on everything digital, social and the Internet.” Pulse Check placed me among some pretty esteemed company – strong leaders in their respective areas.

I chose to focus my Pulse Check presentation on mobile technology – exposure to the mobile world is like entering a whirlwind: fast-paced, innovative and totally unpredictable. That being said, there are discernable trends that have and will continue to shape mobile tech developments in 2012.

While the rest of the world has gone mobile, North America is only now starting to catch up. Mobile devices are now “officially” mainstream. At CES, they estimated 216 MM smartphone units to be shipped worldwide this  year.

Here are some current catalysts to change in the mobile industry:

Last year I wrote about the impact of this phenomenon called the Splinternet: a digital divide, that’s dictated by large players in an effort to establish monopoly on the entire customer experience.  What does this result in? Incompatible standards that not only make it difficult for search engines to find data, but which also continually challenge the developer learning curve.

I remember when HTML 5 was first introduced a few years Ago. Apple positioned HTML5 as a replacement for Flash. A few months later that decision was reversed because of Internet outRAGE. Adobe came out afterwards stating that Apple’s reluctance to include Flash in iPad technology will mean buyers will essentially see a crippled Web.

But consider some of these stats: I pulled from Venturebeat recently.

It will be interesting to see how Apples’s influence will hasten HTML5 adoption in an attempt to reduce Flash’s continued lead.

Android’s move to the top of the smartphone market has been nothing short of phenomenal… that is up until the end of 2011.

According to recent Neilson figures, “62% of first-time buyers of smart-phone buyers chose Android in October [2011], but by December only 47% did”.

This has significantly closed the gap between the two operating systems, but what Neilson numbers aren’t quick to reveal: Android soundly beats iOS in every market. In fact in the UK and in most of Asia, “Android still outsells all iPhone models nearly two to one”.

The numbers are quick to point out that both OS combined are pushing approximately 85% market share, with RIM clearly not a significant player.

Tablet Wars… Apple may not be relevant to the mass market

The chasm between the younger and older generations in terms of computer usage will become apparent in 2012 with the rise of the tablet PCs.  Younger users increasingly are turning to tablets and smartphones as their primary means of computing and access to the internet. This, in turn, will reveal, to a large degree whether the PC can remain relevant to this younger audience, hence forecast its eventual demise.

How big is this market expected to be? Shipments of tablets are expected to approach 250 MM units in 2017.

Here in the West, Apple has held it’s tablet competitors at bay, and may launch a cheaper iPad this year. However on a global basis, tablet prices may fall dramatically. Remember the launch of Kindle Fire at $199 last fall?  Remember Sakshat, the world’s cheapest tablet retailing at $35 from Micromax? The government of India bought the first 100,000 units to give to students for a free pilot run. Look out for another company out of India, Lava to launch their tablet technology into the mass market. More such offerings will surely come, putting heavy pressure on the iPad and other premium offerings.

How will all these areas of digital division and competition affect jobs? Even in these economic times tech companies are hiring big: According to Mashable, 2012 will see an increased demand for mobile app developers, data warehouse analysts and user experience designers.

If you happen to be lucky enough to be in these capacities, the market will be looking for you!

Canadian tax software to help you file your own taxes