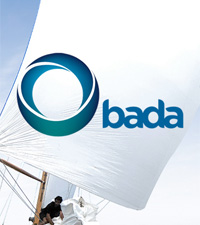 The word "Bada" translates to mean "Ocean" in Korean.

Can we have a round of applause please? Samsung’s Bada mobile platform just joined an already crowded market consisting of (in order of market-share); Symbian, BlackBerry, Windows Mobile, iPhone, Android and WebOS. While the existence of the platform was announced a few weeks back, this time around there’s a website and everything.

Samsung has been recently experimenting with the Android in devices such as the Samsung Galaxy™ launched by Bell Mobility while traditionally being a key Symbian player. It looks like Samsung is getting ready to kick Symbian out the door when the new in-house Bada project launches “early 2010”. The new platform seems to be target at the company’s low to mid-level handsets suggesting that Android would continue to be the choice OS for high-end Samsung phones.

Bada handsets will feature 3G connectivity, Wi-Fi, GPS, multi-touch screens and will include Samsung’s proprietary TouchWhiz UI. We have a feeling that Bada might turn out to be that fantasy operating system gadget-o-holics have been praying for, when a well designed user interface like HTC’s SenseUI™ got an OS that actually complements it.

The jewel of every Smartphone platform is the application store and continues to be the key differentiating factor. Coming in late means Samsung has to work extra hard to play catch up with players such as iPhone’s AppStore and the Google Market. This is why Palm’s WebOS and to an extent even BlackBerry’s AppWorld have failed to capture the flag to this date. The good folks at Samsung however have put up a bounty of US$2.7mn for the best application developed on the new platform which may trigger an army of utility apps. Already major players EA and Gameloft have signed up to developer games on the platform. Samsung says an SDK is on its way for third-party developers to start building their own apps, and plans to provide deeper integration with the device that neither iPhone nor Android provides.

Competing with the iPhone and Android will require Samsung to open up Bada to developers.

With a suddenly uber-competitive mobile marketplace and an assortment of wireless carriers to partner with, the North American invasion plans for Bada are bound to have an initial foot-hold on Canada soil. This can be developing trend for phones arriving from Europe and Asia to test the water in Canada before making the journey south to the mammoth US wireless market.

All of the sudden, we Canadians are in the promised land when it comes to mobile technology and innovation. When Bada comes calling sometime next year, we can be sure that there would be at least one wireless carrier in Canada to open the door.

How about you? Will you give Bada a chance?