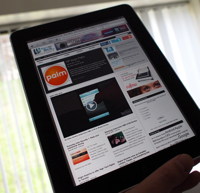 Its been hyped, its been delayed for a month and it is still the hottest gadget of 2010. WhatsYourTech.ca reviews the 32GB Apple iPad and discovers a special place between notebooks and smartphones where many things are possible and where the future for users and developers looks really bright.

The 32GB Wi-Fi enabled iPad comes in a small box that can easily be confused with a coffee table book. Inside the box is the iPad, of course, plus a few loose pages for instructions, a power brick and a USB cord. And that’s it. Slim, slick, Spartan, stylin’.

Well, maybe a little too Spartan a package. Apple doesn’t include headphones or even a microfiber cleaning cloth with the kit – and a cleaning cloth is a particular must, because the iPad attracts fingerprints like nobody’s business. Oleophobic or not, the screen is a smudge magnet – and seems to have a fondness for cat fur as well. In a perfect world, your US$ 499 (for the 16GB iPad) should buy you the iPad, a nice carry case, headphones and a dock but you will need to buy all the accessories separately.

The iPad isn’t officially for sale in Canada, preorders for the device will begin on May 10. A recent visit to Pacific Mall in Markham revealed that there are already cases and screen protectors being sold for it. To get an iPad today, you would need to either cross the border or risk getting ripped off by prospectors who’ve bought early iPads and are selling them in Canada via Craigslist or eBay. Even if you do get a US iPad, you will not be able to use the Apple App store from the device and will need to purchase apps via your desktop computer and then transfer these to the iPad. There are a lot of hassles involved in early iPad ownership. 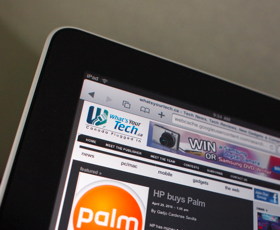 Still, the iPad itself is an incredibly sexy piece of technology. It elicits the same awe and wonder as the MacBook Air did when it first came out. You’ve seen tablet computers before, but you’ve never seen one like this. The sense of amazement grows even greater when you actually touch the device.

The cool and solid aluminum back wraps and tapers around the vast expanse that is the 10 inch touchscreen. Said screen is surrounded by an inch-thick black bezel. Everything about it seems delicately calibrated and machined to be as perfect as possible and the build quality is simply breathtaking. Even without turning the thing on its too easy to fall in love with it.

Thoughtfully, Apple ships the iPad fully charged, which is great since you might soon realize that the USB ports on older or underpowered computers don’t deliver enough juice to charge the iPad, leaving the lonely wall plug as your only power option. Bummer.

But you do need USB to plug the iPad into iTunes and get it all set up. For testing, many apps, some movies and a few photos were moved from a previous iPod Touch backup over to the iPad. The process took roughly 40 minutes. Not bad.

The iPad’s operating system is part iPhone OS and part Mac OS, incorporating elements of both as new navigation functions demand, with subtleties that take a while to discover. The big upgrade is still to come with the iPhone OS 4  Fall release for the iPad. This will bring multitasking to the platform which while nice-to-have on the iPhone and iPod Touch is a must-have feature for the iPad if it is to be used as a serious computer. 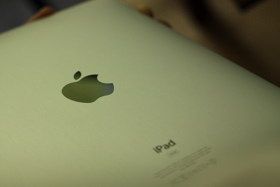 The iPad will run most iPhone and Touch apps and games natively, but they appear at iPhone size, meaning small. While you can upscale them to 2x the size, the net effect is jagged and blurry – downright ridiculous, in fact. This becomes most evident when the upscaled apps bring forth the iPhone keyboard which looks horrid in pixel-doubled form.

That said, Bloomberg and Evernote slipstream free iPad versions of their apps when you first sync the device and a number of developers are seeing the wisdom of offering free iPad upgrades to paid customers.

Amazon’s Kindle App, for example, is also readily available. While this might seem to indicate that Amazon has thrown in the towel for its proprietary e-book reader, it’s really just a new way to sell books, a core business for which Amazon is rather renowned. At any rate, once you see Kindle books blown up to iPad resolution, the Kindle hardware looks wimpy and old.

Some of the better apps you’ll see are from New York Times, BBC, Thomson-Reuters, Associated Press and USA Today. These content-heavy apps have been re-envisioned for this new medium. Collectively, they illustrate quite clearly the future of publishing, right here, right now, right before your eyes.

The iPad is very fast. Page loads, launching Apps… everything it does is markedly faster than the iPhone 3GS. Take into consideration the (much) larger screen real estate that needs to be visually populated and iPad’s speediness all the more remarkable.

The iPad’s touch screen-based keyboard is functional, though it would probably take a lot of practice if you wanted to write anything substantial with it. But for banging out 140 character tweets or quick emails, the software keyboard does just fine. Nothing to write home about… unless you write home using Twitter. We did manage to write a number of columns, including this one on the iPad’s software keyboard and you do get used to it.

iPad’s 1024×768, 9.7 inch LCD screen uses IPS (In-plane switching) technology to provide really wide viewing angles and substantial brightness while consuming less power. The result is phenomenal. A YouTube trailer for  Iron Man 2 and episodes of The Pacific were crisp and vivid even at the lowest brightness setting. 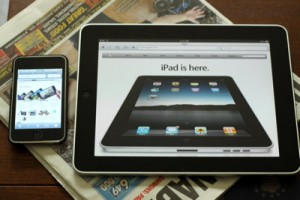 As a portable web surfing tool, you’ll likely spend a lot of time with the Safari browser, which is fantastic. If there’s an inherent game-changing feature in the iPad, it is how it relates web surfing to the form factor. The screen deftly manages to render entire web pages in such crisp and functional detail that it’s simply stunning.

That said, the lack of Flash support is inexcusable. Flash being the ubiquitous internet video and animation format that it is, building an internet-capable device that doesn’t support it seems daft. Many websites are scrambling to offer non-flash content specifically suited to iPhone and iPad, but thousands won’t even bother. So you are at a disadvantage when trying to view Flash based content because your nice, shiny iPad just doesn’t recognize any of it. Now that Apple and Adobe are having a very ugly and very public argument over the merits and deficiencies of Flash, we should assume that it isn’t coming to the iPhone or iPad anytime soon.

Battery life is really, really good. Even after extensive Internet use over six hours while listening to podcasts and music, the iPad had about 70 per cent battery left. The Wi-Fi version of the iPad reviewed here was truly an all-day device. However, it’s likely that a Wi-Fi + 3G versions, with its additional radios for Cell and GPS, will likely eat through the battery much more quickly. Despite hours of extensive use, the iPad remained cool to the touch and generated almost no heat that we could perceive.

After spending a few weeks with the device we can say that  the Wi-Fi-only iPad is great for light computing, heavy surfing, routine email and gaming on the go. It is a capable eReader device and a superb video and music player, too. After Ted’s review of Air Video, we loaded it up and have been having a blast streaming movies and TV shows via WiFi.

Developers now have the challenge of carrying the device beyond fad gadget status into a true  mobile computing and entertainment platform. So really, the iPad is exciting not just for what it is now – new, novel, and pretty darn spiffy – but for all the “magical” and “revolutionary” things it can still become.