Name your price! Er… not any more, it’s over. The Humble Indie Bundle was a package of 5 classic games from independent developers (not the big guys like EA or BLIZZARD). The games are World of Goo, Aquaria, Gish, Lagaru and Penumbera, and are some of the most addictive games you’ll ever play and are offered DRM-free. To buy these games from the developers individually, you would pay $80.00. But for a short time, the developers of these games had organized them in a bundle, where you could name your price. Awesome enough, right? Support independent artists, and get a great deal. But more than this, you could choose to have your money split any way you like between the developers, Child’s Play Charity and the Electronic Frontiers Foundation. 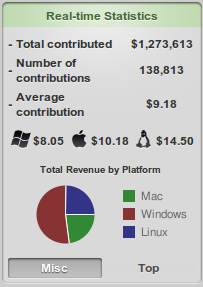 Statistics collected from the Humble Bundle.

The deal closed on May 15th, but is continuing to make news. The resounding success of the offer brought in over 1.2 million USD. More interesting than this, they collected statistics and opened them to the public. Since the package was available cross-platform to Linux, Mac and Windows, we can see how the money was divided across the platforms. The image to the right is taken from the bundle’s website. As one might expect, by sheer numbers the Windows users paid the largest portion of the total, but it is interesting that they had the lowest average donation amount (USD 8.05). As usual, the Mac users try to be just a bit better than Windows users contributing an average of USD 10.18, but they are both outdone by Linux. Even though Linux has by far the smallest market share (less than 5%), they pay about a quarter of the total, with an average contribution of USD 14.50.

And one last bit of awesomeness to come out of this story: FOUR of the FIVE games in the bundle have been open sourced, allowing others opportunities to develop modds, and even to use the engines to make their own games. This, kiddies, is how the gaming industry should be; DRM-free and charitable is always the moral high route.

One last interesting bit of news to come of this is related to the approximate rate of pirating during the period of the sale. In their blog, Wolfire (one of the developers) wrote an analysis of their server traffic to approximate the rate of pirated downloads, concluding that roughly 25% of their downloads were pirated.  I should note that I’m not comfortable with some of their assumptions which bring them to this number, but it’s still an interesting study. Many people reading the blog point out that not everyone in the world has the ability to to pay via credit card due to regional or age restrictions on that mode of exchange. Whether or not that justifies it, is not something we’ll tackle here, but is worth pointing out.

I really do hope that we see this sort of offering again. It represents a lot of the best of the software industry, and demonstrates that a DRM-free and open source approach to software can still be profitable.

Norton focusing on security beyond the PC