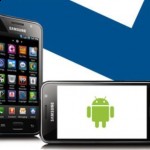 Since its release in North America, the Samsung Galaxy S has sold over 1,000,000 units in the relatively short span of 45 days. There’s a good chance that the Galaxy S family ( and there are many variants across different celfone companies in North America, Asia and Europe) will be in the running as the top-selling Android smartphone as different variants are released.

With a shape that’s very similar to a larger, thinner iPhone 3GS, the Samsung Galaxy S is one of the lightest smartphones we’ve tested this year. In terms of design, this is definitely a less-is-more approach that’s conservative, elegant and functional. One odd observation is the placement of the MicroUSB charging port on the top of the Galaxy S (right next to the headphone port and where the power button is traditionally found) It seems to make more sense to have the charging port at the bottom so you can easily use the phone while it is charging, specially since that space is completely unoccupied. We also don’t see how any sort of charging dock or accessory can exist for such a strange choice port placement. This design choice isn’t unique to the Galaxy S as the Sony Ericsson Experia X10 also has the charging port on the top.

Opening the rear case reveals a large battery compartment, the SIM card slot (which thankfully a normal one and not the newfangled MicroSIM size) as well as a MicroSD card slot for expansion. The Samsung Galaxy S comes with 16GB of storage out of the box that is more than enough for most users.

Samsung has gone with a glossy plastic enclosure that is black and metallic gray up front and a non-textured a carbon-fiber design on the back. Closer inspection reveals a front-facing camera for video calling (reportedly over 3G and not limited to Wi-Fi calls, which is awesome) and a rear 5 Megapixel autofocus camera without an LED flash.

Photo quality (above) has proven to be decent in well-lit conditions although a tad overexposed. The Galaxy S can also record and play back video in 720p HD mode and it is also the first Android smartphone to support DiVX playback. LED flashes are dinky add ons but nonetheless useful and good-to-have and could have definitely made a difference here, too bad they decided to omit it from the design.

Samsung’s 480×800 Super AMOLED screen is one of the big and exclusive features of the Samsung Galaxy S Vibrant. That big, well-saturated screen is the first thing you notice with this device. With less sunlight reflection, a brighter screen and reduced power consumption – super AMOLED has a number of benefits over previous AMOLED screens. Colours are bright but more importantly, contrast is sufficient and well balanced so while everything is ultra-saturated it isn’t insanely bright.

Watching videos (even the YouTube type) is a joy as is looking at pictures and galleries. We don’t think this screen will be great for reading text or eBooks though, it’s a tad too bright.

The Galaxy S also uses Samsung’s TouchWIZ screen skin which works above the Android OS 2.1 version that the device ships with. Our biggest reservation about any overlay (such as HTC’s Sense and Motorola’s MotoBLUR) is that they need to be recompiled and tested each time a new version of the Android OS comes out which adds months to release updates and sometimes gets in the way of users being able to enjoy the latest features and tweaks.

Having said that, TouchWIZ is as subtle and unobtrusive as an overlay can get. It has the familiar look-and-feel of Apple’s iOS even if the buttons and apps react like Android apps. It has a number of nifty features such as its own task manager (a necessary tool on any Android device), Daily Briefing (which pushes weather, news and to-do information) as well as Samsung’s own app store. Being a Bell handset, you get access to Live TV and Radio (subscriber option) as well as the Remote PVR app which is a really big plus for Bell subscribers. 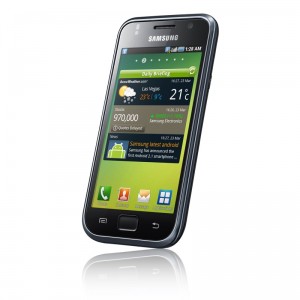 With a 1GHz Hummingbird processor and impressive GPU performance, the Samsung Galaxy S Vibrant has the muscle and speed to handle the most demanding Android apps and games as well as manage the constant multitasking and fast-app switching that all modern smartphones are expected to do on a regular basis.

This is instantly evident when starting up the phone, once the colourful and complex animations and requisite Samsung logos appear you find that you are ready to use the device in about 5 seconds.

Moving through the apps is wicked fast and you really feel the quickness of the device when using media apps such as the camera and the gallery application as well as the browser which is surprisingly quick to render even complex pages.

This is a smartphone that has more than ample power and speed and should cheat planned obsolescence for at least two years. Consider that it has the processing power of a 2009 netbook in a size that fits in most pockets and you’ll realize that it is a truly a super smartphone. Sadly, Adobe Flash isn’t implemented in the Galaxy S so you will get a lot of websites with empty and blank areas where the Flash content should be.

Reception and call quality was generally good. The our calls came through clear and the speakerphone has very good volume. Bell’s HSPA network was consistently strong throughout the GTA (Greater Toronto Area).

Battery life is also very impressive and we managed three days of mostly Wi-Fi usage on a single charge with a few calls and media playback using the YouTube app. Great performance for such a slim device. A few months ago HTC’s Google Nexus One would have been the hands-down standard bearer and flagship Android smartphone in the market.

It had an AMOLED screen, a fast processor, the latest Android OS and a slim and light form factor. That distinction now clearly belongs to the Samsung Galaxy S Vibrant that offers a reasonably new version of the OS, a stunning and bright new screen plus equal parts power and efficiency in a smart and slim form factor. This is Samsung at the top of its game, it may have come to the party a little bit late but it compensated with a stunning array of features in a device that’s surprisingly thin.

bookscene.ca defies e-Books and e-Readers and embraces the old-fashioned book