The World Health Organization’s (WHO) International Agency for Research on Cancer (IARC) has classified the radiation emitted by mobile phones as “possibly” carcinogenic.

The WHO says cell phone use may be cancer causing.

OK, it’s the last, or lowest, level of cancer classification the WHO uses, but it is a significant announcement by a reputable organization, nevertheless. Its recommendations for preventative action say that hands-free operation is good, less use even better.

Maybe they didn’t know about a Canadian entrepreneur and tech company called Tawkon, and a free app it makes available to users so they can track their own exposure levels (you can find more information on that app below).

The WHO did not quantify the risk or provide measurements of it, but the organization’s researchers say they will be tabling several reports on the subject in the near future.

In the meantime, it made its call in a public announcement yesterday.

“The WHO/International Agency for Research on Cancer (IARC) has classified radiofrequency electromagnetic fields as possibly carcinogenic to humans, based on an increased risk for glioma, a malignant type of brain cancer,” the agency said.

There are some five billion cell phone/smart phone users on the planet, and at this point, no parallel increase in the number of diagnosed glioma cases, critics of the announcement have noted (some increases have been documented, however). And, in reply, those warning about radiation say symptoms or signs may not be noticeable or measureable for several years.

Children are often seen as potentially more vulnerable to the effects of electro-magnetic radiation and cell phone signals, due to less developed brain structures and skull thinness.

It is precisely because of these unknowns or potentials that the WHO is among the organizations calling for significant research into the issue.

“Given the potential consequences for public health of this classification and findings, it is important that additional research be conducted into the long‐term, heavy use of mobile phones,” added IARC director Christopher Wild. “Pending the availability of such information, it is important to take pragmatic measures to reduce exposure such as hands‐free devices or texting.”

For its part, the U.S. based wireless industry trade group CTIA downplayed the WHO report.

“This IARC classification does not mean cell phones cause cancer,” said John Walls, vice president of public affairs at CTIA.

In Canada, the corresponding group, CWTA, takes a similar position, stating “[t]he overwhelming evidence in the scientific community as determined and published in numerous studies worldwide supports the conclusion that there is no demonstrated public health risk associated with the use of wireless phones.”

And while the cell phone manufactures themselves have made similar comments about there being no risk, it is worth noting again that user manuals and product information sheets (such as comes with the iPhone 3G) do contain printed warnings about using a cell phone or smart phone too close to the body (just over one half an inch in Apple’s case)

So there is at least an issue, if not consumer confusion, about cell phone radiation.

Tawkon, based in Israel but co-founded by Canadian CEO Gil Friedlander, has put together an online archive or information and press reports (including a story published here at whatsyourytech.ca on Wi-Fi radiation concerns in Canada) on the subject. 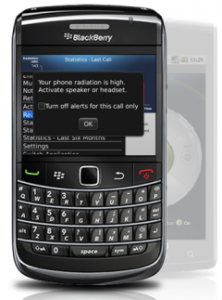 It has also developed and released Tawkon, calling it the only mobile application that monitors real-time radiation levels and gives users simple prompts to lower their personal exposure.

You can read more about the technology behind Tawkon online;  Apple, Blackberry and other devices are supported by the free app.

It lets users see their exposure to cell phone radiation through smart prompts the app generates. It’s then up to you to deice whether to limit, stop or continue cell phone use.

Tawkon monitors and analyzes active time spent with a mobile phone, with minimal disruption to normal phone usage, measuring radiation so you as a user can “talk on” while at least being armed with additional information.

Which is just what the WHO called for, as well.

Do you need more information on safe cell phone use?

Do such warnings affect your smartphone use in any way?

Did you, like Mayor Mel, wonder who the heck WHO is?