Have a few hundred million dollars on hand?

Good; here a chance to risk it all in a game with no rules!

Some time next year, Canada will go to the auction block – well, its 700 MHz wireless spectrum (along with the 2.5 GHz band) will.

These are incredibly valuable chunks of telecom real estate. 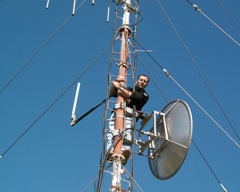 More mobile wireless spectrum will be up for auction in Canada.

If you want to see a truly modern Canadian mobile Internet and wireless broadband eco-system stretching from sea to sea to sea, how the auction plays out will be of tremendous importance.

Of course, if you plan to offer mobile Internet and wireless broadband services anywhere in the country, how the auction plays out could make or break your company

So the country’s wireless service companies and telecom providers have been in planning and acquisition mode since the auction was first announced several years ago.

However, with the auction hammer about to drop, there are still no clear rules or operational guidelines as to how the auction will be run, who will be allowed to play – and in some senses, what they bidders will actually bid on.

One thing is known – the last time the government held a spectrum auction, it raised like four and a quarter billion dollars!  Several new companies sprang up as a result, and lots of new mobile services were purchased by customers across the country.

So the stakes are very high, and all the main players are left dancing around the table, just waiting for the music to stop and the auction to start.

The 700 MHz spectrum used to be used for TV, particularly those analog channels named 52 to 69. The analog bandwidth was ‘reclaimed’ recently in the transition to digital over the air television transmission, and the freed- up bandwidth is now up for grabs.

Going forward, it will be used to deliver even more mobile broadband services; specifically, those highly touted 4G LTE services. High speed wireless Internet access and support for streaming video to mobile devices are included in the industry’s main plans for the spectrum.

In fact, the two broad chunks of broadband spectrum work very well together, and may be paired in some situations. Both bands are allocated to mobile broadband operators, and a frequency combo deal is highly prized as higher frequencies bring greater capacity while the lower ones bring greater range.

Health care advocates see the spctrum auction is a somewhat different light, particulary following a change in Health Canada’s recommendations regarding wireless device and cellphone use by those under age 18.

Im any case, the government will unwrap the auction rules sooner rather than later, and it has been feeling the pressure from all sides as it prepares to do so.

The country’s Industry ministry, for example, has confirmed several meetings that have been held between the responsible government agent and several telecom companies, like Rogers, Quebecor, Globalive and some ten others, in order to set some rules and parameters for the auction.

There’s a game I’d love to play – one in which you set your own rules!

Videotron, seen as one of Canada’s newer wireless carriers, wants the government to set aside twice as much space for new entrants to bid on as for established companies, saying this will trigger innovation and bring product and service to market faster.

TELUS says such a ‘bias’ would however dampen or limit roll-out of wireless services in rural or underserved areas, due to market pressure and demand.

Rogers wants no restrictions on the auction, and it’s launched a publicity and awareness campaign – I want my LTE – to boost its position.

Rogers says “an open auction will unleash the power of Canadian innovation; a closed auction will erect barriers to national growth”  while its competition says the big players are  hoarding spectrum.

(Rogers was ruled out of the last auction, when most of the spectrum was made available to new entrants only, like Wind Mobile, Videotron, Mobilicity.)

But the smaller carriers like Mobilicity refer to the big boys as ‘spectrum hoarders’ that have “more spectrum than they need”.  In preparation for his speech at the country’s big Telecom Summit, Globalive’s Anthony Lacavera had a great line ready : ‘There’s a very simple principle we learn as children. If you can’t eat what’s on your plate, don’t ask for more!’ 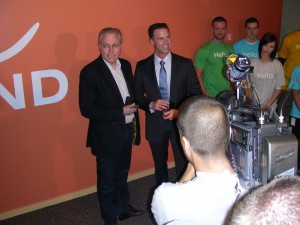 Wind Mobile came into being after the last wireless auction.

However the auction plays out, the smaller companies are clear – they are ready to complete, and they will have hundreds of millions of dollars (much from foreign investors, another auction controversy) to spend to get the air they want.

The Public Interest Advocacy Centre PIAC says the goal of the auction should be more than about getting the highest price.

There are still deficiencies in the Canadian mobile wireless market, it says, and so spectrum set-asides should be used to encourage new entrant competition, as well as to meet other public safety demands and spur innovative community based broadcasting initiatives.

“This is not simply a matter of getting the most money, but also of fostering the most efficient market for wireless,” said Michael Janigan, General Counsel for PIAC.

It sees the auction of spectrum in 2500 MHz band in the same fashion, with the objective of furthering wireless service competition a key and overarching one.

PIAC also proposes a ‘use it or lose it’ rule for the auction, so that companies that re successfully  in getting their hands on this valuable commodity do not then sit on it.

The idea of a 700 MHz wireless auction began several years ago; in Canada, it may well come to fruition in the next few months.

How the rules are set will be crucial to how the results play out – we’ll be watching with interest as the rule book is released.

Ideally, there’s a big benefit for all concerned. The government should get more money in the till. The public should get better and cheaper mobile multimedia and Internet applications, with increased coverage for those currently without. The providers undoubtedly can make more money.

Probably to prepare for the next auction.

So, what’s your tech? Are you eager for more bandwidth and new services?

Do you have any concerns as the government prepares to auction off ‘public’ bandwidth for ‘private’ use?

Rogers LTE network review: How fast can it go?