We’re often advised to see things from all sides.

I think it was Wittgenstein, in his dialectical interpretation Tractatus Logico-Philosophicus – or maybe it was Joni, in Both Side Now.

In any event, be it philosophically, politically or photographically, being able to see people, places or things from all angles, in an immersive and navigable panoramic image, is all the rage these days.

Whether you are using a smartphone, a video camera or a top of the line still camera, there’s hardware and software available to help you create revealing 360 degree images.

After, all, it is a round world, and that is how it should be photographed.

That’s how Dave Ripley sees it – and he unveiled a ‘spherical photo solution’ many years ago to make his point.

Infinite Pictures 360 photo system required a special rotating tripod, a recommended 35mm camera, and his special software to stitch individual shots together into a panoramic montage that could be ‘navigated’ with a mouse and computer screen.

Other tools available back then included software packages (remember Apple’s QuickTime VR, or LivePicture’s Reality Studio on the software side) and hardware devices from Ipix – still going, it seems – or Kaidan (no longer selling products) with its range of panoramic tripods, mounting gear and other 360 devices) which tried to show us all sides. 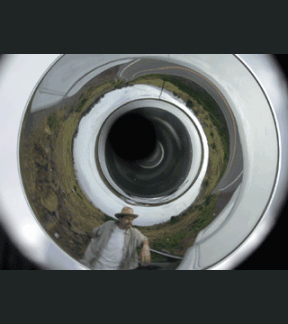 This unique view of Maui (and 'your humble correspondent') was taken more than a decade ago, using immersive imaging technology developed in Canada.

There was another company out of the Maritimes that was in the picture for a while then: in early 2001, I reviewed a curved shiny mirrored device from Halifax-based VR Interactive Inc.

Attaching my (analog) SLR to the device, it captured a weirdly circular and donut-like image, which, when viewed in the company’s special online viewer, could spin and rotate and give many unique vantages points from one photo – hey, in my case, the shots were taken in Maui, so they all looked pretty cool.

But VRI was unique in the approach it took. I still have that old device, but sadly the company and its services are unreachable now.

Luckily, the tools and techniques for 360 image making are easier and less obscure – it’s not even called photography anymore.

Using its new handheld 360-degree imaging device, it is one click to a high-resolution, navigable image.

Tamaggo says it sells an egg shaped device with a 14 megapixel chip inside, and special embedded panomorph technology, for about $200. The gadget was a2012 CES Innovations Awards honouree in the digital imaging category. 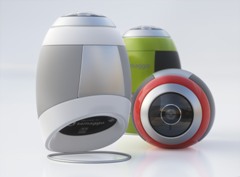 Tamaggo wants to redefine photography with its 360 degree imaging device.

A somewhat similar device from Kogeto is at the heart of a new interactive feature launched by CTV News in Toronto (it seems to be the first Canadian deployment by a major broadcaster).

CTV journalists and videographers are using the Kogeto Dot mounted on an iPhone to capture 360-degree view in both photo and video formats, and posting the results online.

CTV’s 360 View platform lets viewers control the camera to see every angle of the story, without pausing or stopping the story. A simple click-and-drag (or, in the case of mobile devices with touch screens, a finger swipe) will change the view immediately.

Visit this page to access 360 View and check out the latest videos.

Kogeto uses a high quality lens and HD imaging chip to capture scenes, and then it applies its own catadioptric optical system (one that captures both reflected and refracted light waves to create images of objects as well) so there’s no ‘software stitching’ of the 360 images.

Kogeto also has a solution for sharing the images, online or via social and mobile (Android and iOS so far) platforms. 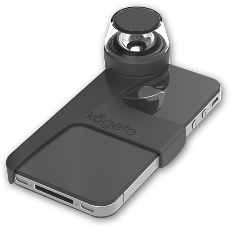 Kogeto and an iPhone can capture 360 degree photos and videos.

Immersive Media, one of the pioneers of 360°, full motion interactive video, started by delivering those popular “street views” used in online search engines.

The company, with offices in Kelowna, B.C., uses a high-resolution, 11-lens camera and full complement of production and post-production services to serve the needs of search companies, as well as military and law enforcement groups.

Immersive’s patented flagship, the Dodeca 2360 camera system, captures high-resolution video from every direction simultaneously. It delivers 100 million pixels at 30 frames per second (2400×1200 pixels/frame) and supports a number of video formats. And at 2.5 lbs., the Dodeca camera head is highly portable and by using available accessories it is easily attached to automobiles, helicopters, backpacks and other rigging equipment.

The im360 website is hosted at im360.immersivemedia.com and can be visited through either a web browser or the im360 mobile app.

Of course, seeing things from all sides is a big plus if you are into surveillance, like Montreal’s ImmerVision. 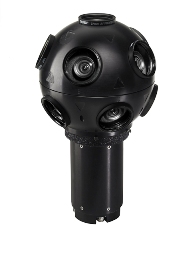 ImmerVision's 360-degree panomorph lens technology can be used in surveillance and movie-making.

Its 360-degree panomorph lens technology, along with viewing software from its partner, Dodwell B.M.S., gives most analog and IP cameras the ability to expand their field-of-view, achieve greater surveillance coverage and eliminate blind spots in a fully navigable image display.

Be it live or recorded, cameras can capture and screens can display a 360 degrees x 180 degrees, distortion-free picture that supports a high degree of magnification.

The potential for 360 technology and immersive imagery is really tremendous; not just for keeping one eye on things, but for looking at life from all sides, now.

Canadian tax software to help you file your own taxes

How much are you paying for your Internet access?