Canada is suffering from a lack of data capacity, and that’s bad news for Internet users in specific and our overall economy in general. 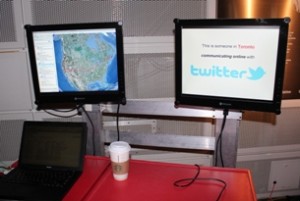 The IXMaps data tracking tool shows the routes our e-mails, messages and tweets can follow online.

The country’s Internet ‘backbone’ is so weak, in fact, that everyday Internet transmissions like e-mails and SMS messages have to travel outside the country (where the infrastructure is more robust) – even when the data is sent from one location in this country to another.

Internet infrastructure has a direct influence on the Canadian economy, says the Canadian Internet Registration Authority, the organization that manages the .CA Internet domain, and the current situation is “unacceptable” in its eyes.

CIRA has just hosted the ICANN 45 conference, at which technology and regulatory practitioners from around the world came to Toronto to discuss ‘Net-related issues, like data capacity, naming protocols and international co-operation.

ICANN, the Internet Corporation for Assigned Names and Numbers, is a non-profit organization responsible for coordinating the Internet’s addressing system of unique identifiers, including country code Top-Level Domains (ccTLDs) such as .CA,  as well as generic TLDs (gTLDs) like as .COM and .ORG.

The 12th Annual Capacity North America conference is just about to open in Toronto as well, with its look at recent developments and future strategies for global broadband, telecom and Internet services and operations.

The carriers and Internet Service Providers (ISPs) and broadband carriers represented there will examine how their revenue bases have already changed due to changing consumer and business habits online, and which products and services will deliver the margins and profits the companies demand for sustainable growth and operational stability.

Key to that growth and stability are what’re called IXPs, or Internet Exchange Points (IXPs): IXPs are physical locations where one ISP’s network meets up with another. IXPs pass along the data – it’s called peering – based on technical, strategic, business and/or jurisdictional agreements.

But the longer the route between or among peering networks, the longer a transmission will take: data latency will increase, and websites will be slower to load.

Even more concerning to some, the international nature of Internet traffic and cloud computing, and the fact that personal data and confidential business communications are more vulnerable when they cross borders and reside on servers in other jurisdictions.

CIRA says we need more IXPs; it notes with concern that there are about 350 IXPs around the world, and some 85 in the U.S. – all integral to the Internet infrastructure – but in Canada, there are only two public or non-profit IXPs. There are three for-profit corporations running IXPs in Canada, including U.S.-based PEER 1.

“This is not acceptable,” said Byron Holland, president and CEO of CIRA, in calling for a national IXP fabric here. This is about improving security, speed and network resilience, while maximizing the amount of traffic that stays within Canada for the benefit of all Canadians.”

Many Canadians don’t realize that much of Canada’s domestic Internet traffic flows outside of the country before eventually reaching its destination.

That’s partly because Canada needs more IXPs, as CIRA warns. But its is also the result of peering agreements between major ISPs, and their business, operational and contractual agreements to move data among and between them. 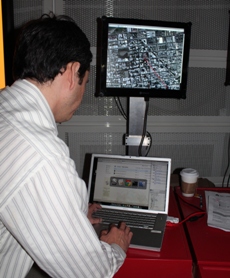 The IXMaps tool, recently demonstrated at the Ontario Science Centre, can be used to show the weaknesses of the Canadian Internet infrastructure.

“Increasingly, data handling is done behind the scenes,” explains Professor Andrew Clement of the Faculty of Information at the University of Toronto; he and Nancy Paterson, Associate Professor, OCAD University, are heading up a unique project that can show us how our data is handled, where, and by whom.

Their project team has developed IXMaps, a Canadian developed website and interactive tool that lets users tracks the packets that make up their e-mails, website requests and other data transmissions.

The IXMap team is being supported by the Office of the Privacy Commissioner of Canada, which is providing funding for research and awareness projects that look at important Internet privacy issues: IXMaps is among them.

Paterson, Clement and the team are receiving support for its ‘Mapping Canadian Privacy Risks in the Internet Cloud’ project, and to conduct an information session about Internet routing and cloud computing, and its privacy implications for all Canadians.

As such, the IXMaps tool was demonstrated live at a recent event at the Ontario Science Centre, and attendees could see in real-time where certain messages were really going.

It’s been estimated that some 40 per cent of all Canadian communications traffic passes through just one location – at 151 Front St W in Toronto.

That TOPIX location is home to several ISPs and carrier companies, and many of the largest and most robust are, again, U.S. owned.

Interestingly, one of the privately held companies operating at 151 is Soonr, a firm back by (non-Canadian) giants like Intel Capital, Cisco and Presidio Ventures.

Soonr is in fact pitching its customers here that it can “guarantee customers that their information will never leave Canada for any reason.”

Members of the IXMaps team were also in attendance at the ICANN 45 meeting, which also drew senior government officials and industry leaders from around the world to Toronto, where they discussed and debated the need to preserve and improve the Internet’s multi-stakeholder governance model.

ICANN practices consensus-based policy development, that multi-stakeholder approach, also known as a “bottom-up” model, which relies on the cooperation and collaboration among different Internet stakeholders worldwide.

Stakeholders such as businesses, civil society, governments, research institutions and non-government organizations cooperate and participate in the dialog, decision-making and implementation of solutions to common problems or goals.

The art of technology keynotes and product launches