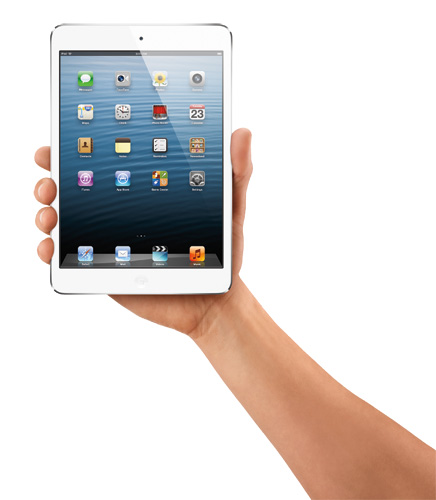 As was largely expected today, Apple did reveal a new iPad mini that shrinks the screen size of its larger counterpart down to a 7.9-inch display, and a starting price of $329 for a 16GB Wi-Fi-only version. It will hit retail in Canada on November 2.

The new iPad mini comes in at 7.2mm, 23 percent thinner than the fourth-generation iPad, which was also unveiled today as an incremental update to the third-generation model originally launched in the spring. Screen resolution comes in at 1024 x 768, also the same as the iPad 2. Apple’s CEO Tim Cook also made it a point to note that apps will work seamlessly on the mini as well.

The mini weighs 0.68 lbs. and is said to be half the weight of the previous iPad. The black model has a black back, while the white model has a silver back, much like the iPhone 5’s two colour schemes.

It uses a dual-core A5 chip, last seen in the iPad 2, has a FaceTime HD camera and a 5-megapixel iSight camera on the back. It will be LTE-enabled, offer faster Wi-Fi in Wireless-N at both 2.4GHz and 5.0GHz and will include the new Lightning connector that was first introduced in the iPhone 5.

In a comparison to the Nexus 7 Android tablet at the event, Apple claims that the iPad mini has 35 percent more “screen real estate” than any 7-inch tablet, including 67 percent more usable viewing area when browsing the Web.

The new tablet will be available in Canadian retail on November 2, with pricing set for the Wi-Fi-only models at $329 for a 16GB, $429 for the 32GB and $529 for the 64GB. Wi-Fi + Cellular models will also begin shipping a couple of weeks after with a $130 premium on top of the Wi-Fi model prices. They will be sold without contracts by carriers, so getting an LTE data plan won’t require signing up with any of them.

Surprisingly, Apple preceded the iPad mini announcement with a new slight upgrade of the larger iPad. The “fourth-generation” iPad is essentially the same machine in size and weight. The differences lie in the A6X chip that is said to double the processor’s speed while also offering “up to” twice the graphics performance. A FaceTime HD camera has been added in the front, coupled with improved Wi-Fi performance.

It will also have the new Lightning connector at the bottom, and a line of adapters and accessories were announced to support cameras, SD cards and VGA or HDMI digital video. The fourth-gen iPad will also be available November 2 in black or white for a $499 for the 16GB model, $599 for the 32GB model and $699 for the 64GB model.

An expansion of the Smart Covers now includes ones for the iPad mini, available in pink, green, blue, light gray, dark gray and red for $39 apiece. 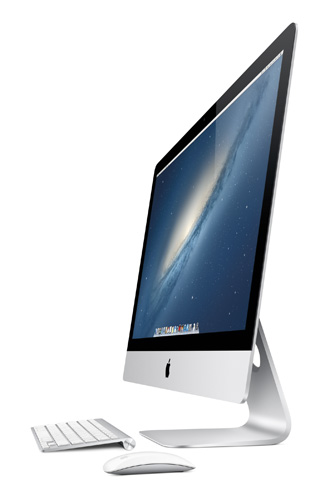 On top of the new iPads, a 13-inch MacBook Pro with a Retina display was unveiled, measuring 20 percent thinner at 0.75 inches than the previous model. It weighs in a full pound lighter than last year’s model at 3.57 lbs. It also has two Thunderbolt ports, two USB 3.0 ports, an SD card reader and HDMI output. The Retina display has a resolution of 2560 x 1600 pixels, which Apple says offers 29 percent higher contrast, 75 percent reduced reflection and a 178-degree viewing angle.

The FaceTime HD camera is now 720p, there are dual microphones, plus stereo speakers that sound better than before. The starting price for this one is $1,699.

And in surprising fashion, Apple also showed a new iMac that is 80 percent thinner than the previous model, measuring just 5mm thin. In going that thin, the company removed the optical drive, making this the first iMac to not have one since the line hit the market in 1998.