The real challenge for tech innovators, entrepreneurs and engineers working in the field of additive layer manufacturing is to identify what cannot be printed on a 3D printer.

While the concept has been around for some time, the idea is a new one in practical terms, and still a strange one to many.

But start by thinking of 2D printing, in which a document is printed by applying ink to a flat piece of paper.

In 3D printing, the device uses not ink, but anything from coloured plastic to powdered metal to edible gelatine.

So, somewhat like a traditional ink-and-paper printer, where a nozzle moves over the print surface, 3D printers lay down multiple layers of material, one on top pf the other, over and over, eventually building up a three-dimensional, solid object of pretty much any shape or size.

To print out a 3D object, a user must first have a blueprint or design that the printing device will ‘read’; designs for 3D objects can be created using a computer-aided design program or 3D animation software, or they can originate as a 3D scan (this technique results in the printing of an exact copy of the scanned object, true in shape, size and dimension if not actual material). 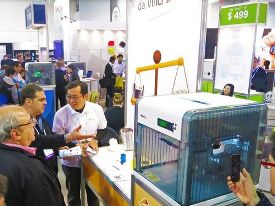 The da Vinci 3D printer drew lots of attention at CES, partly due to the low price.

As 3D printing technology matures, as more uses emerge, the market for 3D printers is moving from niche to mainstream, with worldwide unit shipments expected to grow by 10 times in the next few years.

Perhaps the least expensive – for now – has been unveiled at the Consumer Electronic Show: for $500, the new da Vinci 1.0 3D printer can be had; it’s an entry level device, but it is just one of many 3D printers now available with different features and functions for each.

In fact, one Canadian supplier of 3D technology has dozens of 3D printers and hundreds of printing materials from which to choose.

One of the newest 3D printing ‘inks’ or additive materials is a kind of graphene-enhanced polymer which has both good electrical and thermal conducting properties. That means electronic devices, batteries and gadgets can be printed. 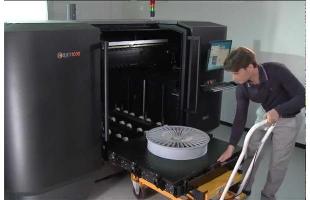 3D printers can be very large, as can the objects they produce.

But surely the fact that Hershey’s has paired up with 3 D Systems, a leading 3D printer company is among the best news one could get!

The huge chocolatier is entering the 3D world of printing, and its showing how chocolate bars – OK, food in general – can be constructed by layers. Printed food can be changed in terms of its texture and form, even in terms of new ingredients, but just don’t muck about with actual cocoa, OK?

More importantly, medical researchers are using 3D technology to build up skin grafts for burn victims, even new organs for transplant patients, to be printed when needed.

In such cases, the printer ‘ink’ is an organic compound or specialized gel filled with real living human cells. Layer by layer, biological shapes are built up in the required form.

Other unique applications for 3D bio-fabrication include making leather and meat. Using a simple cell culture harmlessly gathered in an animal biopsy, real leather and edible meats can be printed.

Umm, can I start with the chocolate?

Hershey’s has formed a partnership with a 3D printing company. Mmmmmm….