Dell thought leaders and industry professionals recently gathered in Austin, Texas at the annual Dell World event to discuss technology opportunities and challenges, and how they propose to make a lasting difference in business and IT.

In the opening session of Dell World 2015, Michael Dell showcased some of the innovations driving technology today and the even greater opportunities that lie ahead. A recurring theme shared by the opening session’s executive panelists – and across several sessions I attended – was empowerment of people to transform the way organizations operate. Two sessions, in particular, that championed this theme were ‘Women in IT’ and ‘Diversity in Tech: Changing Mindsets’.

Karen Quintos, senior vice president and chief marketing officer (CMO) for Dell, and Carey Lohrenz, aviation pioneer, entrepreneur and best-selling author, provided a thought-provoking session about women in IT and the importance of teamwork and taking action in today’s ever-changing business world.

Ms. Lohrenz spoke experientially about the power to act and to work with one’s team for ‘the big win’, something she credits to risk-taking behaviour she honed during her ten years flying $45 million fighter jets. 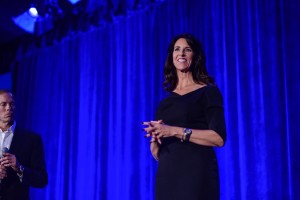 Further, she explained how inconsistent execution could generate catastrophic results in fast moving environments. “Be mindful when you are moving in an environment that is constantly changing,” Ms. Lohrenz began. “You are never going to have the perfect plan or strategy. Once a plan is perfect, it is no longer valid or relevant, as the environment has likely changed. As leaders in an environment of great ambiguity, stay focused on the things that matter and remember that 80%  is good enough and just start taking action,” she summed up.

Ms. Gore, who moderated the panel, began with describing diversity as “huge opportunity for all of us in our organizations.”

Ms. Mahoney quantified the scope of job opportunity by saying, “By the year 2020, there will be 1.2 million tech jobs available in the U.S., and [only] 400,000 computer scientists coming. It is both a pipeline and an organizational issue.” Further she explained, “It will be awhile before the girls in middle school are going to be working: organizations need to work on [this], now.”

“Diversity and inclusion is a business imperative and not just gender diversity, but across all lenses and areas,” commented Mr. Hegarty.

“Change has to come from top down. The majority of leaders are men, so to drive change we have to engage leadership and men, with men advocating for real change.”

Hegarty went on to explain the effect of bias in his personal – but previous – hiring practices, citing that he tended to promote women to leadership who were English speaking.

Panelists then shared program experience and strategies that they consider effective in building diversity in organizations.

“The language you use in your LinkedIn profile really matters,” remarked Ms. Mahoney. “Women suffer from a ‘likeability factor’. It is important to use both agentic and communal language in profiles so your skills are represented properly.”

Speaking for diversity in the workplace, Ms. Johnson stated her belief in formal mentoring and sponsorship as positive strategies for employee retention and recruitment.

An advocate for mentorship, Mr. Polit shared that he currently mentors six people, each of whom come from different backgrounds and generations.

“[For] companies that are truly global,” added Polit, “the leadership team needs to reflect the local culture and the market. Coca-Cola employees have gone to the homes of people they want to recruit in nations where the environment for working women is especially difficult.  For example, in India where [we] wanted to hire women into the sales force, we spoke to parents and explained why we wanted their daughters to work for us,” Polit said. “When they join us, we start winning more.”  It’s [also] the same reason why we are flexible with working mothers.”

“Hour of Code,” added Ms. Mahoney, “is one of the most effective programs, today, and it reaches children all over the world. The program[1] has taught 133 million children to code. Further, Girls Who Code is another program that encourages girls to develop awareness and skill in coding, and, hopefully, into becoming future computer scientists.

Ms. Mahoney was also quick to point out, nonetheless, some troubling facts to consider:

Dell does a data set every year called the Gender Gedi. The Gender Gedi report examines the work environment for female entrepreneurs in countries across the world. In its annual Global Women Entrepreneur Leaders Scorecard, the United States ranked No. 1 out of 31 countries, but only received a score of 70 out of 100.

Ms. Mahoney went on to say, “Give people the tools to look outside their comfort zone and to look at the data and understand it.  Give them training that enables them to understand their micro/subconscious biases. Even human resources personnel aren’t immune to these biases.”

[1] This year, Hour of Code will run from December 7th until December 13th.