It’s OK, go ahead, step on the technology! 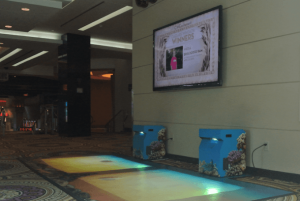 When you walk across video projections on the floor of retail outlets, financial institutions and gaming casinos, it is one of the ways marketers can get you to stop, take notice and interact with their messages and calls-to-action.

Your footsteps may trigger sequences with informative text or graphic displays, video sequences from remote locations, and more.

Using interactive motion detectors, infrared and/or digital video cameras, responsive LED video walls and sophisticated computer programming, the visitor experience is changing radically these days, from the moment you walk into an equipped establishment to well after you leave.

That’s because the display technology is often linked to IP networks, opening up the world of social media interaction, direct online marketing and other Web-based fulfillment activities.

Patented software packages are available from several companies, but one of the first to bring motion detection, gesture recognition, video projection and interactive response technologies together was a Toronto-launched company called GestureTek. 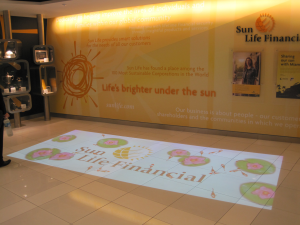 An interactive floor technology installation from GestureTek for SunLife Financial.

Co-founded some 25 years ago in a rather crowded and poorly lit downtown warehouse space by Vincent John Vincent, the company is now based in the U.S., and it is a global leader in providing interactive experiences in consumer-facing environments, but the technology also has fascinating uses in applied science, medicine and pure research.

At their most basic, however, interactive wall and floor displays are fun – and they are designed to delight, engage and inform. That’s what Carmanah Signs had in mind when it installed technology for an interactive visitor experience at the front entry to Caesars Windsor Hotel and Casino.

Calgary, AB-based Carmanah (with offices in Toronto and elsewhere) and sister company enVu created a casino welcome area that communicates information about new games, the resort’s restaurant and attractions, and showcases past casino winners.

In the middle of a cold Ontario December (and pretty much any other time), visitors are welcomed by a virtual tropical beach scene built into an interactive walkway. As patrons walk across the floor, their footprints appear and disappear in the sand, and the projected interactive sequence leads guests to a large 2×2 responsive interactive video wall experience where the tropical imagery and inviting messaging continues. 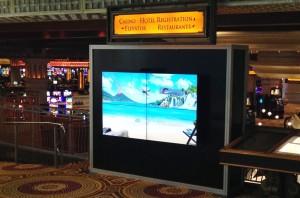 When in “idle” mode, the on-screen tropical video scene scrolls from side to side, while highlighting new games, venue logos and other information.

When in “idle” mode, the tropical video scene scrolls from side to side, while highlighting new games, venue logos and other information. When a patron enters the “active” area, the scene brightens and the experience responds to the person’s movement. As the beach scene progresses, new areas of the beach are revealed, coming into and out of view as the patron moves into and out of the active area.

By capturing a patron’s attention and presenting brand messaging as they interact with the scene, the latest news and service offerings at Caesars Windsor are presented in an effective and engaging manner.

That engagement factor is critical both on-site and afterwards. Interactive systems can not only track a visitor visually, they are able to gather, process and act upon customer information that is collected wirelessly.

New advertising technology called Walkbase is being integrated into digital signage systems from Samsung, for example, in order to transform how in-store advertising and branding really works.

Get this – the platform analyzes customer behaviour through Wi-Fi signals from their smartphones! The system knows the path a customer takes, what they look at and the timing of their visit, and all that information and more is put into a shopper profile.

The profiling data (the companies say it is anonymous) is then used to manage advertising on in-store digital signs, using the profile information to customize the message for the intended target.

Gathered information and on-going analytics can be fed into connected marketing and content management systems, so ad managers can continue to fine-tune the campaign and ensure maximum impact, the companies describe.

The interactive visitor experience deployed at Caesars Windsor was installed by Carmanah when the casino hosted the Canadian Gaming Summit last summer, and so it was a terrific opportunity to demonstrate the system to other potential users.

While retail and consumer spaces are certainly among them, it is the gaming and gambling establishments that make the most use of interactive video technology systems, both for entertainment and regulatory purposes.

Gambling facilities in Ontario are regulated by the Ontario Lottery and Gaming Corporation, and they utilize video and computer systems to manage safety, security and what’s known as the self-exclusion program.

Problem gamblers may enrol themselves in the program, and that means they know they will be photographed on any such premises, and they could be arrested and charged with trespassing if they enter a gambling facility. 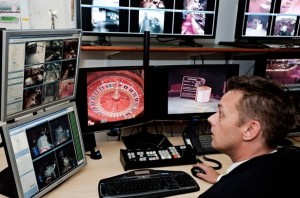 Gambling facilities in Ontario and around the world utilize video and computer systems to manage safety, security and what’s known as a self-exclusion program for problem gamblers.

Program participants’ faces are entered in a biometric facial recognition system, and if they try and re-enter a casino, faces are matched and their exclusion can be lengthened.

The OLG spends some $50 million each year on programs for problem gamblers, including the technology used to surveil the facilities.

Tens of thousands of people have signed the self exclusion agreement.

One can only hope they are not attracted by the same interactive technology meant to attract so many others.

Holiday-Themed Streaming Playlists Worth Checking Out