With the sad news about David Bowie’s death, WhatsYourTech remembers its story about the Bowie show at the Art Gallery of Ontario, called David Bowie is, which served to encapsulate his remarkable career in music, fashion, film, entertainment and technology. This story was first published on August 7, 2013.

Fans of Bowie, art and music should be aware that the AGO will honour the pop star and mark his passing with a special event this Saturday, January 16 at 6:30 pm. It is a ticketed event, and an invited choir will lead attendees in the singing and recording of one of Bowie’s greatest hits, Space Oddity. For more info, please visit http://www.ago.net/ccc-at-the-ago-david-bowie.

So sang British pop star David Bowie on his 1976 album Station to Station; Bowie was anticipating our future even then.

His lyrics directly apply to a new tech-driven multimedia show about him, set to open at the Art Gallery of Ontario this fall.

Special audio guides from Sennheiser will be used to transmit David Bowie tunes to Gallery-goers.

The show will span two floors at the AGO, in part to house a whack of interactive technology and audio gear used in the show. The Gallery is working with audio tech company Sennheiser, which is going to install its wireless guidePORT audio guide system and two immersive 3D sound simulations.

David Bowie is made its debut at London’s Victoria and Albert Museum; the exhibition is now on tour and Toronto is its first North American stop.

The high-tech show will present more than 300 of Bowie’s creations and collaborations in fashion, sound, theatre, art and film, from a career that spanned five decades. His impact on the music, arts and entertainment worlds in which he has worked is unquestioned, and this exhibit does his unique creativity full justice with its comprehensive collection of artifacts, memorabilia and media documentation.

Gallery visitors will get the chance to use special RF-enabled audio guides with earphones that deliver music, narration and other soundtrack elements via wireless signals.

Some basic content is stored on the bodypack receivers, but all music and video sounds get transmitted in real-time to the visitor, including the major concert clips and sequences.

The exhibition will use some 550 wearable bodypacks with stereo headphones, linked via a dozen or so twin cell transmitters, to deliver media content to individual Gallery-goers. The system senses when a Gallery visitor approaches a specific object or screen in the show and it delivers the appropriate content.

Little identifier boxes installed throughout the exhibit are programmed to trigger the immediate download of relevant location-based content and play it on the visitor’s headsets. At the end of this technologically guided tour, visitors take off their headsets to enjoy a simulated concert experience.

As footage of Bowie’s live performances is shown on giant wall-sized screens, specially enhanced music is delivered on more than two dozen concealed loudspeakers and subwoofers, configured as a 9.1 surround sound system.

The special concert sound was enhanced with some unique audio processing so that both original stereo and mono material can be played as a multi-channel reproduction, using a special audio processing up-mix algorithm called Auro 3D.

It’s based on psychoacoustic effect analysis and patent-pending processing that takes the original signal and then calculates a fuller, richer 3D sound. The greatest challenge is that the 3D simulation must not be allowed to distort the sound, Sennheiser engineers describe, noting that the processing of Bowie’s songs took a couple of days each. 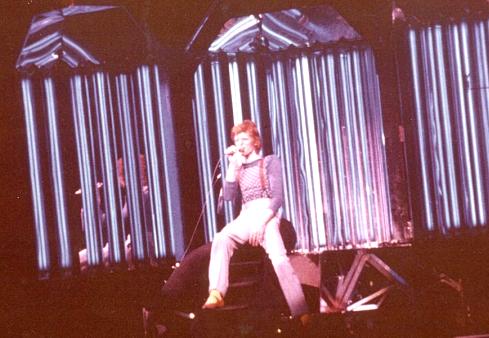 Simulated concert experiences are part of the upcoming David Bowie is exhibition at the Art Gallery of Ontario. Bowie is pictured here in a 1974 concert at the then O’Keefe Centre in Toronto. Photo by Lee Rickwood.

The exhibit itself has been in development for some time, too, with V & A gallery curators working with the official David Bowie Archive and its archivist, Sandy Hirskowitz, to select objects for exhibition.

Performance excerpts include Bowie on Top of the Pops and Saturday Night Live.

David Bowie is opens September 25, 2013 at the Art Gallery of Ontario.

CES 2016: what the show portends for the rest of the year