You won’t find it on the catwalk, and it’s not starring in a Hollywood movie.

But emerging from the sometimes superficial worlds of fashion and filmmaking is a meaningful medical development — a special suit that can monitor and record body motion in a detailed and therapeutically useful way.

The information this new ‘wearable technology’ can collect is used to help treat people suffering from degenerative diseases like Parkinson’s that reduce our ability to control our central nervous system and motor functions.

Tech is not only embedded in the suit, it’s a key part of the automation process that will enable its mass production. 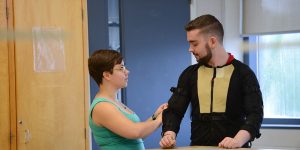 Fanshawe graduate Louise Marchand (left) adjusts belts on the motion capture suit. Marchand and Fanshawe design professors designed the suit to be used in the diagnosis and monitoring of Parkinson’s patients.

The prototype motion capture suit helps health care professionals document and assess repetitive, involuntary shaking of a patient’s body part, most commonly the hands or head. Doctors currently assess tremors visually; the special new suit and a separate sleeve device use motion-capture technology like that found in our smartphones to isolate and track specific muscle groups.

An accurate assessment is the best way to then determine the correct drug dosage for that patient’s therapy. The prototypes can be used by healthcare providers and caregivers when monitoring tremor treatments in the hospital or at a patient’s home. 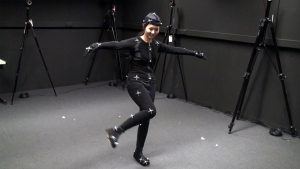 Hollywood moviemakers and special visual effects creators use motion capture suits and special camera set-ups in their work. Now, the technology has medical applications as well.

To make a Hollywood special effect, a camera records a scene in which the actor is wearing a motion capture suit dotted with white coloured balls that act as data points when the scene is played back in special software.

But this medical motion capture suit and separate sleeve product have multiple motion sensors embedded in them, located at fixed points that help map the human anatomy. The sensors track a patient’s movement and a software program developed by MDDT captures, converts and incorporates that sensor data for further medical monitoring and assessment.

Earlier prototypes needed many adjustments, so Marchand’s first task was to research and conceptualize a more functional suit. High performance fabrics had to be found, and then the pattern, fitting and sewing requirements were incorporated into a final technical design package for the manufacturing purposes.

“I initially researched many options to solve the problems presented, and through a variety of discussions with the team, as well as trial and error, we were able to come to a final design,” Marchand said.

Features of the suit include large and easy-to-use zippers and belting features, mesh underlay for breathability, anti-skid fabric to tighten the sensor pockets against the body, a two-piece design for ease of use and pockets to hold more than 50 sensors. It’s also washable.

The Parkinson’s suit is currently being used as part of a clinical research project at the London Movement Disorders Centre whereas the TremorTek sleeve is waiting to be commercialized within the next year once the proper approval is received from the FDA and Health Canada.

More than 40 million people are diagnosed with movement disorders and essential tremors; more than ten million people live with Parkinson’s and many other patients suffer from other conditions like Torticollis, Multiple Sclerosis and stroke.

“The collaborative efforts between MDDT and Fanshawe College allowed us to address an unmet patient need in medicine,” said Jack Lee, chief technology officer at MDDT. “We are grateful for the design by recent Fanshawe graduate Louise Marchand, with guidance from Fanshawe design professors, which incorporates comfort and practicality into new medical technology.”

The project received funding through the Natural Sciences and Engineering Research Council of Canada (NSERC).