Advanced digital technology and sophisticated software programs have helped uncover the big ideas behind some very small artwork, in what’s been dubbed the first true use of virtual reality in the world of art galleries and museums. 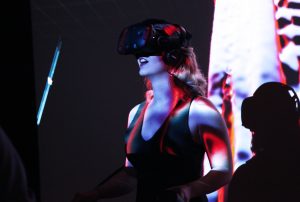 Visitors at the Art Gallery of Ontario are encouraged to ‘get into’ art in a brand new way – VR. Photo courtesy AGO / Leah Maghanoy.

It’s an incredible new VR program that lets users ‘walk around’ inside an art object so small it fits in the palm of your hand.

During January, the Art Gallery of Ontario is encouraging visitors to enjoy Small Wonders: The VR Experience.

The VR content is part of the Small Wonders: Gothic Boxwood Miniatures exhibition now underway at the AGO. More than 60 handmade wood carvings are on display, each very small but packed with exceptional detail and artistic precision. The tiny devotional objects convey religious scenes from early Christianity, and the groundbreaking VR takes visitors inside one miniature in particular, bringing to life symbolic scenes that are carved on multiple layers inside the object, including lots of people “transitioning” to Heaven or Hell. 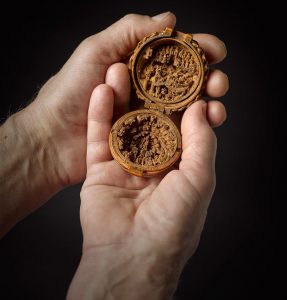 It’s almost the perfect application for VR – unlike programs that seek to open up otherwise flat, 2D spaces, the Small Wonders experience opens up an already three-dimensional object that’s just too small to truly appreciate in the real world.

The carvings on display are more than 500 years old, created by unknown craftsmen working in northern Europe in the 1500s. That makes the miniatures all the more remarkable because the carving techniques remained a mystery for centuries. But science, research, and technology have now helped uncover the big secrets contained in these tiny sculptures.

A lot of today’s VR experiences are fictional, dramatic, even fantastical in their role-play opportunities. But this is not a VR game, and it’s not a first-person shoot ‘em up: it’s a techno-enabled investigation of actual history and real culture, said Ana Serrano, Chief Digital Officer at the Canadian Film Centre (CFC) and a producer on Small Wonders: The VR Experience.

“Everyone is searching for that sublime encounter one can only have in VR,” Serrano noted. “With the boxwood miniatures, we have found the perfect, transcendent landscape to explore in this medium.”

Art researchers and curators sure think so.

Well into what would be some five years of research for the exhibition, AGO Curator Lisa Ellis happened to see an earlier CFC VR demonstration called Northern Dancer. She knew then and there that VR would be the perfect way to explore the fascinating art objects normally encased behind protective glass displays.

The project would eventually bring together art historians and curators, image technologists and animation specialists, software programmers and program producers, cultural institutions, private companies and more in a collaborative and creative desire to know more about boxwood miniatures (there are only about 135 that have survived).

The physical wooden carvings were carefully scanned and imaged using a micro-CT (or micro-computed tomography) scanner at Western University; to create a three-dimensional CT image, a number of two-dimensional scans are acquired in a setup in which the source and detector are at a fixed position and the object is rotated around its axis.

Andrew Nelson described the scanner at Western as much higher in resolution than even a clinical or medical scanner, which typically resolves images at a “slice thickness” of 0.6 mm each. In fact, he said the micro-CT scanner is capable of 20 times that resolution! 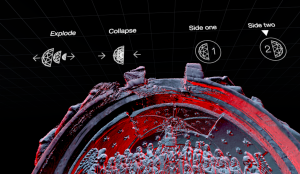 A screen capture from the Small Wonders VR experience shows some of the interactive buttons for navigation control.

The detailed scans were then processed and rendered using advanced 3D analysis software (ORS SI) which can create high-impact visualizations from scanning data. The renders are the building blocks for the VR experience (although the file sizes were so huge they had to be “cleaned up” so as to be responsive in real-time).

VR Creative and Technical Director Priam Givord (from Seneca College, where students and faculty from the School of Creative Arts and Animation made significant contributions to the project) put the scans into a gaming engine and different shader programs as part of building the VR experience. He used visual development platforms like TouchDesigner  (from Toronto software company Derivative) and Shader Forge to manipulate the lighting, colour scheme, interactivity and other program elements.

It’s another example of VR at its best – bringing to life a reality that otherwise cannot be seen or experienced.

The Small Wonders exhibition itself continues at the AGO until January 22, but the VR experience is only available on weekends.

Museumgoers in New York and Amsterdam will also be able to enjoy Small Wonders: Gothic Boxwood Miniatures when it heads to the Met Cloisters at the Metropolitan Museum of Art this February and the Rijksmuseum come June.

Lee Rickwood is a part-time employee with the Marketing and Design Studio at the Art Gallery of Ontario.