New tools to protect online privacy and security are coming to market with increasing regularity, driven in part by long-existing concerns over criminal activity on the Internet.

But even legal activity, such as commercial big data analysis, ad placement and behavioural targeting, can rightfully contribute to increased concerns about Internet safety and privacy. What’s more, new government policies and procedures are themselves threatening Internet privacy, and they are spurring a growing interest in ways to stay safe and protected online.

VPNs for Companies and Individuals

Capable software security suites for the home and small business computer are important data protection tools for sure, yet increased interest in and availability of Internet proxy tools and virtual private network (VPN) solutions are helping to create one of the latest IT growth sectors. Not only individual users, but private sector companies and businesses, public health care and education institutions, and more are looking to establish VPNs for their own use, and that of their customers and users.

VPNs are seen as a way to secure and protect data transmissions that are sent across a public network like the Internet. VPNs use robust authentication protocols to prevent unauthorized users from getting on the network, and from accessing or reading the transmission itself.

VPN software connects a user’s device to the VPN provider’s network, and then to the wider Internet, through a protected data pipe that is, theoretically, invisible to prying eyes – be they criminal, commercial or even governmental.

Traffic on the Internet is guided and directed to its destination by a string of numbers known as an IP address; every device and every website has one, and knowing that address means everything that travels to and from it is accessible.

VPNs seek to hide or obscure that address, or substitute other numbers, in such a way that even the broadband service provider is not supposed to be able to read the real identifying IP information. VPNs say the “encrypted tunnels” they create between your device and your Internet destination are protected and private. (But while transmission content may be secured running through a VPN, if the operator keeps recorded logs of the data flow or traffic routing services being provided, privacy can be at risk.)

VPNs do have the potential to ensure anonymity on the ‘Net, and they can be invaluable in a civil or human rights context; they are also extremely popular as tools to get rights-protected programming from geo-blocked media services like Hulu, Netflix or Amazon Prime.

What’s more, data transmissions can be particularly vulnerable in public Wi-Fi networks, such as offered in a café, hotel or airport lounge, and virtual private networks can be a privacy boost in such situations, especially for business users and road warriors.

Are Free VPNs Worth the Cost?

So there are now hundreds of VPN providers out there, offering both free and fee-based data protection, and choosing among them can be difficult at best. Even well-regarded online lists and evaluations of top VPN service providers need to be assessed carefully (many reviews are from VPN providers themselves and may not be perfectly balanced as a result; some VPN services are offered by ISPs themselves, somewhat undermining the purpose and intent), and potential consumers must make a careful assessment of all the pros and cons of a particular VPN service.

You may need a world atlas and knowledge of global jurisprudence to make the best assessment of a VPN service: the locale of a provider’s server will impact just how private the data that passes through can remain, in light of new laws and national regulations regarding personal data privacy.

Another downside often noted is a slowdown in Internet speed and data throughput; transmissions going through that secure and dedicated VPN pipe can be hampered by the processing, encrypting and alternate travel route. That’s a concern to the providers, not just the users, and many VPN platform operators are already addressing broadband throughput with more robust infrastructure (bigger pipes, more servers, and so on).

But even the most highly touted VPN services must be put into context, such as with a 2015 research paper that tested a number of VPN apps. The authors concluded that the apps were not protecting privacy and security online, and in fact were undermining it as many tested solutions had malware embedded in the app itself (only free VPN apps were tested). 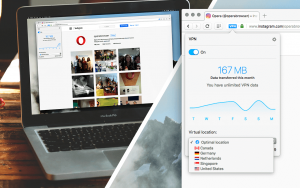 Web browsers like the Opera 40 release are including virtual private network tools in their core product packages, a sign of the VPN’s growing popularity and the ever-increasing need for privacy and security online.

Despite the concerns and obstacles, VPN development will certainly continue going forward, and virtual network tools are being embedded into other products, such as Web browsers themselves. New VPN products will have added focus on data security and personal privacy, advocates say, by incorporating more robust encryption, new authentication protocols, and enhanced network access controls as ways to enhance the offering.

Virtual private networks promise enhanced security and privacy online. But let’s face it: any such offering is providing us with protection from a product or service that has no right to be dangerous in the first place. The unfettered growth, and commercial potential, of the Internet has given us products that are unsafe from the get-go.

Hardware and software vulnerabilities are in many cases well-known before product launch, and such vulnerabilities have for some reason been allowed to remain on the market even after launch.

So, as has been written before and was restated recently by a leading tech observer and security analyst, “The only surefire way to protect your online identity is to opt-out of the [I]nternet”. 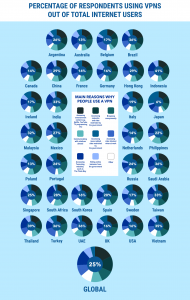 Celebrate May the Fourth With Star Wars-Themed Tech