Surely it is a matter of culture and attitude as much as infrastructure and technology that must change if there’s any chance of eliminating sexual violence at school and on campus.

But while universities across Canada are putting in place new safety policies and procedures, tech-enabled systems are enabling new forms of reporting, documentation and communication if and when needed.

Digital signage networks and large-size video display screens are often used to convey in real-time news, updates and details about any emergency situations that may arise on campus (as well as promoting non-emergency activities).

Part of the safety strategy for students, and one of the most widely-used campus safety apps was developed here in Canada and it’s been adopted at several leading Canadian and U.S. schools who rightly felt a more capable solution than what was then available was sorely needed.

Starting with its pre-built app engine and core function modules, AppArmor develops apps that are customized to an individual campus and can connect with existing emergency systems on that campus.

“AppArmor is a great company to have as a partner,” says the Campus Emergency Manager at the University of Guelph, one of AppArmor’s users. “They also supply other institutions with the same app, so they get where schools are coming from and understand our needs.” 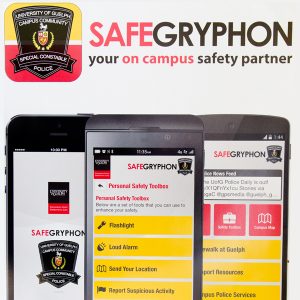 The University of Guelph’s campus safety app connects with other specific safety tools and it’s used to send out emergency notifications.

UGuelph’s Steve Forbes noted in correspondence with WhatsYourTech.ca that, understandably, “the number of downloads fluctuates with the time of year: September we see an increase as new students arrive and in April we see a decrease as students leave. We are around 5,000 active users today.”

As important and necessary as student safety is on campus these days, Forbes explained that adding other features made the app even more attractive to users: “We definitely wanted to balance the safety side of the app with some of the daily uses that the app could help a community member with.”

They include pre-programmed buttons in the app that connect to student residence desks, for example, which students call a lot. There’s an interactive map of the campus so new students can search for and find a certain building. The flashlight feature of a smartphone can be turned on from inside the app as well.

Of course, the app also connects with specific safety tools, such as the campus police Twitter feed, CrimeStoppers, FriendWalk or SafeWalk (to request a protective walking companion) and it is used to send out emergency notifications.

Forbes shared some interesting insights he’s amassed about using a safety app: “When we started the app, I would attend community events and ask people if they have it on their phone, many said they did/didn’t but some said that they had it on their phone but deleted it. When asked why, they said they feel safe on campus and didn’t feel the need to have the app.

“That is when I started looking for practical options to add to the app so it was not so safety-based… We are always looking a new and fun options in the app to make it [more] appealing for people to download and keep on their phone.”

Is the mere presence of a campus safety app on a student’s smartphone an unwanted reminder that sexual violence can and does occur? Does the presence of a safety app open the user to embarrassment (or worse) should a friend or a date see it on their phone? And, in the worst case scenario, is using an app the most effective and immediate response that can be made to sexual violence?

One alternative to the app-based reporting tool is a web-based service that provides a confidential documentation and reporting tool, and it is rolling out in Canada.

Calgary-based RallyEngine Inc., working with its U.S.-based Callisto, announced it is bringing the RallyEngine SafeSpace service to this country. SafeSpace offers a secure, third-party information service with options for survivors of sexual attack: to record an incidence of sexual assault, to report electronically to authorities, and to report only if the perpetrator is identified by another user. 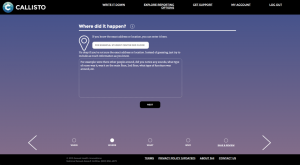 A web-based platform presents victims of sexual assault on campus with a self-managed space to write, edit, and confidentially submit time-stamped incident reports at their own pace, in their own language.

Callisto founder and CEO Jessica Ladd, whose 2016 TED Talk has been watched millions of times, says that because sexual assault survivors wait on average some 11 months before reporting their assault, and because less than 10 per cent of survivors will ever report their assault (to the proper authorities), a new approach to reporting and documenting such assaults was desperately needed.

So the SafeSpace platform presents users with a self-managed space to write, edit, and confidentially submit time-stamped incident reports at their own pace, in their own language.

Part of the Callisto concept is to then use the aggregated data to analyze and diagnose assault trends or patterns, to make data matches when possible among report descriptions, and to then deliver analyzed data report to the respective school or university.

Because data collected by Callisto is always aggregated and anonymized, the company says schools will never receive information that can be used to identify an individual user.

Obviously, because for something as sensitive as disclosing sexual assault, it is crucial that that user data cannot be tied back to a specific user. Aggregate data, however, is data that is anonymized and combined to analyze the activities of multiple users.

Data delivered to the schools is owned by the schools. Callisto says it wants to continue to provide research- and data-driven tools, but will not share individual school data without permission.

Permission, of course, is an all-important word in the conversation surrounding sexual assault; so, too the idea of a safe space is an underlying foundation to eliminating sexual violence at school and on campus.

Best Messaging Apps to Keep You Connected With Friends & Family