They may look like a play doll at first, but these are not toys: they’re techno-enabled tools that can help girls build valuable computer programming and digital media skills.

Yes, they are colourful and a little bit cutesy, but the Siggy robots are serious about getting more girls into STEM and encouraging them to become tomorrow’s programmers.

Educational technologies have come a long way, and classrooms these days are much more likely to have e-robotic platforms as toy dolls for students to play with. In fact, programmable robots and remote-controllable coding tools known as Siggy Robots are now available in Canada.

These bots combine technology and play in an award-winning e-learning product line called SmartGurlz. The “gurlz” are a line of fashion dolls that ride around on programmable Segway-style scooters.

The app takes girls through the basics of computer and mobile app coding by getting them to take their fashion doll for a spin.

Using the Sugarcoded app that’s included with the platform, girls (ages 6 and up) learn how to code their robots to accomplish story-based challenges, missions and adventures. The app takes girls through the basics of computer programming and mobile app coding by getting them to take their fashion doll for a spin – whether the Siggy cruises in a straight line, zig-zags to its destination or moves in a coordinated dance routine.

SmartGurlz also supports free-play and networking (via Bluetooth-enabled phones or pads) so that girls can share their codes with friends.

Yes, they are colourful and a little bit cutesy, but the Siggies and the SmartGurlz platform are serious in the overall goal of getting more girls into STEM and encouraging them to become tomorrow’s programmers.

STEM, of course, stands for science, technology, engineering and math.

The acronym was originally coined to describe the shortage of skilled workers in these areas, and in order to address the inadequate education of students in these fields. STEM is often expanded to include the arts (STEAM) and research (STREAM). 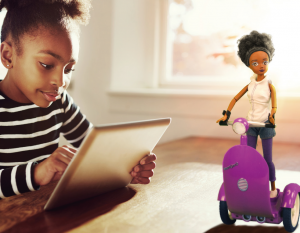 No matter the acronym, the low proportion of skilled female workers and students in STEM is worrisome to industry analysts and technology leaders. On average, women make up only 15 to 25 per cent of the current STEM workforce, and the gap is widening.

“We have a long way to go when it comes to inspiring more girls to get into STEM,” explained Johanna Garcia, founder of Canadian Classroom, the distributor of SmartGurlz in Canada. “STEM jobs in Canada pay higher than other industries, yet women only represent 23 per cent of the STEM workforce.

“Now that STEM is becoming our focus,” Garcia described in an email exchange with WhatsYourTech.ca, “our goal is to provide educators with different possibilities and expand their horizons. There are so many new robots created for education purposes around the world; but only a small percentage is available in Canada. We want to change that!” 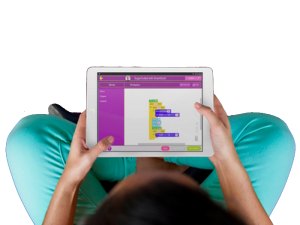 The SmartGurlz design and features are designed to make them more both attractive to and functional for young girls.

Founded in 1999, Canadian Classroom was among the first companies to sell MP3 CD players in Canada and the first to offer Skype phones. Having researched the educational market and the lack of available products in Canada, Garcia decided to focus on educational products, audio-visual aids and then, about four years ago, her company (created and managed by women, she points out) started offering robotics and coding technologies.

As she points out, the SmartGurlz design and features are designed to make them more both attractive to and functional for young girls. Studies show that there is a difference in the brain structure and development of girls and boys. While boys have more grey matter in the brain areas where they house their intelligence; girls have more white matter, seen as a conduit or high speed pathway for brain signals. This is often the reason cited as to why boys tend to excel at math, while girls tend to excel at language, communication and reading. Enter SmartGurlz, and its goal of combining girls’ brain strengths in reading and verbal skills with technology, math and coding.

There’s certainly a difference in attitude and expectation between boys and girls when it comes to the vocational ability or career path opportunities in STEM-related fields: a recent survey conducted by Actua, a leading Canadian  STEM outreach organization, highlighted a gender gap in what Canadian youth think about coding:

While 50 per cent of boys surveyed are very or extremely interested in careers involving coding or programming; only 27 per cent (1 in 4) girls report the same level of interest.

Girls were 14 per cent more likely than boys to characterize coding as difficult.

While 41 per cent of boys say they are somewhat or totally confident in their coding and programming abilities, only 28 per cent of girls exhibits these levels of confidence.

(In a related development, Google has just announced it will fund STEM education and development organizations in Canada, including Actua, which will receive a $1.5 million re-investment from the search engine company.)

To help tackle the differences identified in the Actua study, Garcia added that Canadian Classroom is organizing workshops about programmable robotics, using tools like Siggies and Smartgurlz.

For example, a coding and robotics workshop for kids will be held at the Eleanor London Côte Saint-Luc Public Library on May 12 in Montreal, in context with its 24 Hours of Science event.

“We are organizing workshops in the West Coast,” Garcia added, “and we will surely have some in Vancouver, where our company comes from.”

With the right programming chops, tomorrow’s girls will be setting course today for new and exciting opportunities in tech-related fields.

Understanding the implications of an A.I. future with Microsoft’s Mohamed Musbah