So I have memories of when I was like six or seven or eight (a long time ago) of seeing the future.

Not through dreams or hallucinations, but on a visit to New York City.

There was this big model or trade show exhibit or live demonstration, showing a sophisticated, high-tech city of the future, in miniature. One-person aircraft flew over the urban landscape! Cars, as it were, drove along elevated highways smart enough to get you where you wanted to go – without you having to steer! The air was clear, the streets were clean, people were smiling, life was wonderful!

The exhibit was probably part of the World’s Fair that year (1960), or it could have been associated with what was called I.G.Y., the International Geophysical Year (1957), and activities staged as part of that celebration.

It was a amazing time to be alive, full of promise and potential. Mankind was flying in space, just 50 years or so after Kitty Hawk. Real cars were whizzing about at nearly 100 mph, when people could recall them crawling at just 10 in the ‘old days’. Diseases were being wiped out, and other great medical advances seemed to come every day. Positive technological changes were around every corner, promising a beautiful world and a glorious time for everyone. 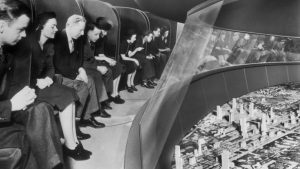 Visitors to the futuristic displays at the World’s Fair could gaze down on the city of tomorrow – a magnificent place of plenty, made possible by amazing new technologies. Archive image.

I do not recall any negative feedback or counter-arguments being made.

In that respect, times sure have changed.

Today, we’re wringing our hands over technology at every opportunity. What effects does tech have on us, and what impact will it have? Is technology good or bad, positive or negative? The discussions and debates and disagreements over the value of technology are taking place all over the place.

As they did in Toronto recently, during the annual talk- and think-fest known as ideacity. A three-day event created by Canadian media mogul Moses Znaimer, ideacity has for some 19 years now brought attendees together with thoughtful presenters and provocative speakers and mind-expanding ideas. It has tackled this thorny issue about technology before.

The ideacity Class of ’18. Hundreds of people crowded into Koerner Hall in Toronto for the 19th edition of the Canadian talk fest presented by Moses Znaimer. ideacity Image courtesy of Gene Driskell.

Normally a series of short talks by multiple speakers across a crowded agenda, this year brought something brand new – basically, entire day was set aside to conduct The Great Debate in the classic structure of presentation, response, rebuttal.

As moderator, Znaimer framed the debate with the big ask: Does digital technology bring a promise or pose a peril?

Not to cut short the debate (because it is a interesting, important and on-going conversation) the answer is: YES.

That is not to undercut the powerful presentations of Peter Diamandis on the Promise side and Diane Francis (for the Peril side) as they debated live on stage (and for TV coverage and multiple web streams, still available online).

Nor is the cutesy answer presented here meant to diminish the input from a panel that joined the proceedings to further the debate and discussion, consisting of Salim Ismail, Rob Nail, Matthew Fisher, Ramona Pringle, Sasha Grujicic and Jim Harris.

You should check them all out.

Opening the debate was Peter Diamandis. The tech innovator, serial entrepreneur and driving force behind the Xprize and Singularity University was very clear he stands:

In the next 20 years, he enthused, technology will help met the needs of every man, woman and child on the planet. We will be more prosperous and more peaceful. We will be living in a world of possibility, where our greatest dreams can be fulfilled.

The future is more than bright, he said, it is better than you think because of the abundance of pretty much everything that technology will soon engender. An abundance of power, for example, through the widespread development and deployment of renewable sources of energy, like solar, that will bring the cost of power to near nothing and thus drive up the potential to fuel other things.

Like medical technologies and health care services, for example.

Diamandis’s talk illustrated how, over the long arc of human history, health has improved and life spans have been extended, due in no small part to technological developments. That arc will continue its direction as new tools for bio-engineering and genetic manipulation are developed and utilized.

Diamandis is so positive because, as he says, he pays attention to data, not the news. Data shows him the evidence is clear, things are getting better all the time. The results can be measured.

Diane Francis, it seems, does watch the news. She writes it, in fact, as a longtime correspondent and columnist for the National Post, among other outlets.

Arguing that technology poses a severe, even existential, peril to us all, she had plenty of examples from today’s headlines to make her point. From the manipulation of elections to the surveillance of citizens to the do-it-yourself genetic splicing tools available on the market, she bemoaned the fact that technology can be developed outside of any ethical or moral guidelines.

It’s a big and important point: not wanting to put the brakes on technological development entirely (Francis readily acknowledged that tech can and has and will bring benefit), she instead wants to bring a set of rules or regs or best practices that steer the technological ship in an intended and mutually beneficial direction.

That fact that bad players – from criminals to rogue states to big businesses and leading democracies – seem to have the most impact on how tech is being used is not good. She proposed a kind of ‘no-harm intended, no-harm done’ playbook be used to steer or control or even, yes if necessary, prevent technological development.

It has happened before, as Francis noted. Queen Elizabeth I denied patents on a powerful new technology of her era, the knitting machine. She was deeply concerned how the machine’s usage would impact her subjects, real people who knitted for a living.

Francis (and many others) are worried about how technology will impact the real people of today, from truck drivers to restaurant workers, from lawyers to doctors to debaters (more on that to come).

So she calls for the development of ethical rules and moral guidelines for the future of technological development so that unintended – or even clearly predictable – negative impacts can be reduced, lessened or eliminated before it is too late.

Which, unfortunately, it may well be.

Even if we agreed to have some sort of ethical guidelines defining the limits of technology, who’d be in charge? Taking the wide social, cultural and political differences now apparent among countries and communities around the world, the next speaker wondered aloud if we as humans have the physical, mental or social abilities to set an agreed-upon moral framework for technological development.

Rob Nail, the CEO and associate founder of Singularity, spoke in response to the debaters: he noted how technology had successfully been used to address human problems in the past, but added that those solutions often caused social disruptions (the kind Francis was warning us about) due to a change in process or procedure. More technology is then called upon to solve the new problems, the ones introduced by the introduction of technology.

There’s a certain economic priority driving such circular logic: it’s not built-in obsolescence; it’s a built-in infinite loop:  problem-solving and problem-creating, all in one.

The cycle continues in a non-virtuous way to the point where change causes more than concern among people: it raises fear. Those fears, Nail noted, can result in the kind of social and political disruption we see today in countries both near and far.

Are we as humans able to cope with it all? Do we have the tools to make the right decisions? Hundreds of thousands of years of human development, it seems, has led us all to be ‘predestined’, ‘hard-wired’ or ‘coded’ to act and respond in certain ways. We get fearful of change, and we indulge in the status quo.

If abundance is around the corner, Nail wondered, can we even deal with it? An epidemic of overweight people and diabetic patients is one result of the abundances we now enjoy: food. What’s next?

Our human foibles may be our worst enemy, not our technologies.

Nail would go as far as to identify a major shortcoming of the debate in which he was participating: the debate was among humans; no technology joined in. If we humans have weaknesses, like being subject to emotional responses as much as factual evidence, the debate needs another voice.

Obviously, Nail pays attention to the news, too. In fact, he cited on the Wednesday of ideacity that just two days prior, the world’s first debate that included AI had taken place.

He was speaking of the IBM Debater Project, and the use of artificial intelligence and machine learning to frame and discuss important topics.

Like human debate experts, Project Debater can argue either side of an issue. It finds pros and cons based on the topic it’s given. But unlike human debaters, because it is a machine, Project Debater is impartial – it isn’t out to prove a position or to be “right.” It is designed to help expand minds and help people see more than one side of an issue. 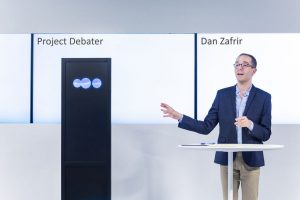 IBM Research has rolled out an AI-enabled debater. In demonstrations and displays, it taps into a huge database of information to present pro or con arguments on a certain topic. The cloud-based platform speaks with a female voice when debating a subject. IBM Image.

The system is strictly looking for facts and the claims it can argue against, she noted.

“While we demonstrated the capabilities of the technology using debate as a platform, this is not our ultimate goal. Our goal is to help humans make complex decisions using unbiased evidence. We envision the underlying technology of Project Debater to present pro/con factual evidence to professionals to make decisions. It cannot debate both sides of an argument simultaneously. If it’s pro, its confidence is reviewing the levels for evidence which support the pro position.”

“[B]eating a human in a debate isn’t our goal.”

Because Project Debater is delivered via the cloud, it very well could participate in ideacity; Dr. Soffer described on-premise machines humming away in the IBM research lab in Haifa, Israel, including a main server unit with 768 GB memory and four terabytes of storage space. The system uses commercially available technology, but all of the core innovations are in AI code.

And she added that IBM researchers continue to develop the underlying AI technology behind the system in preparation for it to be commercialized.

So, for ideacity 20 next year, all the human debaters will be fired! AI will conduct the debate, win its argument, and settle the future for us all!

Or…..as one of the final speakers of the event, Sasha Grujicic, said to us all, really: “Don’t outsource your responsibility to one another, to yourself, to humanity.”

There’s hard work to be done, he warned of the decisions the future makes necessary. It is our collective responsibility to evaluate not just ourselves, but also our technologies. We must determine, he said, what the external costs of our current or future lifestyle will be.

And if we are ready, willing or able to pay up.