Nearly 80 per cent of Ontarians want improved protection for their personal and commercial data, and almost half see new legislation as a way to get it.

Those are among the findings from an online survey conducted by the provincial government about its plans to develop an Ontario Data Strategy. The survey is closed now, but a second phase of policy development has been announced and the government says it will continue with a series of in-person and online consultations about all things digital and data.

Findings from the first phase of consultations conducted by the provincial government about its plans to develop an Ontario Data Strategy have been released. Government website image.

There are important topics to discuss: privacy protection and public trust; the commercial value of data; the risks associated with smart cities; identity theft, democratic governance and more, so one can only hope that more Ontarians will participate. The survey posted in the first phase of consultation garnered just 770 replies (of which just 45% were deemed to be “from the public” as opposed to government or industry).

The somewhat sparse response, coupled with a change in ministerial leadership overseeing early stages of the data strategy process and a lack of detail about the consultations, has hopefully not hindered its continued progress.

Bill Walker was Minister of Government and Consumer Services when the process was announced, and at the time he highlighted some results from the survey, noting that 79% of respondents believe data about people and businesses in Ontario need stronger protection and that 83% of respondents feel businesses don’t do a good enough job of explaining what they plan to do with data collected from the public.

“Our government recognizes that the tremendous economic potential of emerging data technologies needs to be balanced with thoughtful and robust protections for the privacy and personal data of all Ontarians,” Walker said when announcing the survey results. “We believe that Ontarians deserve to know and actively consent to the collection of data, how that data is used, and by whom.”

(Following the June 20 provincial cabinet shuffle, Walker was moved out of the Ministry. Lisa Thompson is now leading MCGS and the data strategy.)

As the government continues its strategic digital developments this summer, members of a new Digital and Data Task Force have been introduced, and a series of in-person and online consultations are planned to gather expertise and insights into developing and implementing an appropriate data strategy. 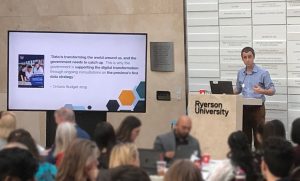 Although a public roundtable was held in Toronto on July 31 at Ryerson University to kick-start the process, no other dates have yet been confirmed for data discussions. Twitter image.

The second phase of consultations is expected to take place over the summer in six locations across Ontario. Plans to include Sault Ste. Marie, Sarnia, Stratford, Ottawa, and Peterborough have been announced; although a public roundtable was held in Toronto on July 31 at Ryerson University to kick-start the process, no other dates have yet been confirmed.

Ontarians should be able to register for in-person consultations through the EngageON platform (no specifics had been posted on the site as of press time, only a “dates and locations to come” notice was visible); inquiries to the Ministry led only to the same information.

The reported timetable for the province’s development of the Data Strategy includes the online release of additional discussion papers for public comment and a final Data Strategy by the end of this year.

That means members of the Digital and Data Task Force will be very busy this fall (Queen’s Park has adjourned for the summer; MPPs are not expected back until after October 28, the day of the federal election).

Led by Chair Linda Mantia, they were selected to help ensure Ontarian’s privacy is protected due to the breadth and depth of their experience in the industry.

A significant portion of respondents (in the first phase of consultation) indicated fears and concerns about data breaches, identity theft, hacking, lack of personal controls on how data are used, and excessive surveillance and tracking.

Vice-Chair Bryan Smith is a co-founder and the CEO of ThinkData Works, a Toronto-based technology company that enables data processing and refinement for governments, banks, and corporate clients across Canada and globally.

Other Task Force members include Bilal Khan is the Managing Partner and Head of Deloitte Data; Avner Levin, the Founding Director of Ryerson University’s Privacy and Cyber Crime Institute; Maithili Mavinkurve, co-founder and COO of Sightline Innovation, a Canadian AI firm; Shyam Oberoi, Chief Digital Officer of the Royal Ontario Museum; Mark Sakamoto, author, entrepreneur and investor in digital health and digital media who has served on the board of the Ontario Media Development Corporation; and Kirsten Thompson, a partner with Dentons Canada and head of its Transformative Technologies and Data Strategy group.

Obviously, these are knowledgeable and experienced professionals in the digital domain and their input into strategic policy development can be valuable. They are representative of the industry and they have succeeded as a result of their participation in it.

While awaiting specific news about the timelines of the Task Force activities and Data Strategy consultations, there’s time to wonder how additional participation from outside industry might help: there’s no citizen’s advocate or lobby group representation, for example. No representation from the not-for-profit sector. No public servants or elected representatives. Additional input from privacy professionals, legal experts and academic scholars can still be received, as can valuable perspective from those already working to provide security for and access to huge stores of information on behalf of the public: librarians.

It was the Toronto Region Board of Trade’s panel of experts that released a report called Bibliotech in which the Toronto Public Library, with its experience and expertise in data policy and information management, was identified as the most appropriate public defender of digital privacy.

Startup Ranking Strong For Toronto but Slides for Vancouver