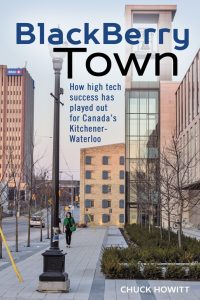 Chuck Howitt’s new book, BlackBerry Town, delves into the rise of BlackBerry as it relates to the development of Kitchener-Waterloo’s reputation as an international tech hub. With a local feel, Howitt documents the growth of the community, the success of the University of Waterloo, and how Research in Motion’s innovative approach paved the way for dozens of new startups.

I asked Howitt, a former reporter for the Waterloo Region Record who covered the RIM beat for eight years, to describe how Canada’s tech industry benefitted from BlackBerry in Waterloo. 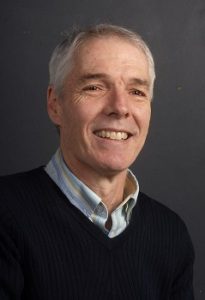 “I covered BlackBerry/Research In Motion and the Waterloo tech sector for the Waterloo Region Record daily newspaper from 2005-13,” began Howitt. “BlackBerry’s rise and fall was a huge international business story, one that happened in our own backyard,” added Howitt.

“The Waterloo tech sector was firmly established before RIM became famous in the late 1990s,” began Howitt. “RIM’s innovation took it to the next level. Waterloo was chosen as the world’s most intelligent community in 2007, thanks largely to RIM. The company’s achievements lured many students to UW and entrepreneurs to the area. Employees of Motorola, Siemens and other global tech firms moved to Waterloo to work at RIM.”

“When BlackBerry downsized, many employees left to start or work at other companies in the area,” added Howitt. “Both universities in Waterloo also received a tremendous boost. Lazaridis invested in the Institute for Quantum Computing at UW and the business school at Wilfrid Laurier University. Its business school is named after him. The two think tanks launched by Lazaridis and Jim Balsillie collaborate on programs with the two universities.”

I asked Howitt how global is the tech success from Kitchener-Waterloo?

“There is much anecdotal evidence of the achievements of the Waterloo tech sector,” said Howitt. “When Bill Gates toured the top tech universities in North America in 2005 and 2008, UW was his only Canadian stop,” explained Howitt. “When Tobias Lutke, founder of Ottawa-based Shopify, visited Silicon Valley to raise funds, investors sang the praises of Waterloo. He was moved to open a Shopify office in Waterloo. Google’s largest office in Canada is located in Kitchener.”

“As for empirical evidence,” added Howitt, “a 2018 study by CBRE, the commercial real estate firm, found Waterloo had the third-highest concentration of tech workers in Canada and the highest among mid-market cities.” And, remarked Howitt, “The Toronto-Waterloo corridor was ranked among the top 20 tech sectors in the world in 2018 by Startup Genome, a California research firm. There are roughly 1,400 tech firms in Waterloo Region, according to Communitech, an association representing tech companies in the area.”

How is the incubator community in Kitchener-Waterloo, today?

“Communitech runs the largest tech incubator in the area and one of the largest in Canada,” shared Howitt. “Called the Hub it is based in a renovated factory in downtown Kitchener. It also runs a second incubator focusing on data-driven startups in uptown Waterloo. Both are full-service incubators offering office space, mentorship, coaching and investors.”

Substantiating the overarching theme of his book that RIM has left a long-lasting impact on the rise and success of tech in Canada, Howitt commented, “The incubators have given birth to a large number of successful startups and scale-ups, ensuring that the incubators will be around for years to come.”

BooknBrunch: The ‘Yummy’ Evolution of the Book Club