Top concert promoters in North America have dropped plans to deploy facial recognition technology at rock concerts and music venues – for now. There may be more sophisticated surveillance technology coming to play.

Musicians and fans alike initially rebelled against announced plans to combine ticket-taking, souvenir-selling and face-scanning: they conducted an awareness campaign against facial recognition and called on corporations like AEG Presents, Live Nation and its Ticketmaster subsidiary to halt use of the tools and technology associated with facial recognition at live shows and concert venues. 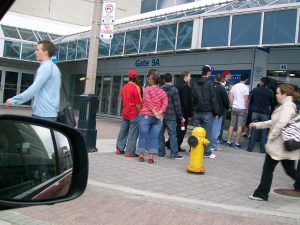 Technology allows fans of live music and sports events to show a paper ticket, digital device or friendly face to get in. “Ticket line” image by haven’t the slightest is licensed under CC BY-ND 2.0.

The rockers’ protest seems to have worked.

It was more than a year ago when Ticketmaster first announced it was partnering with and investing in a U.S.-based facial recognition start-up called Blink Identity as part of its 2018 Q1 earnings statement:

“We will continue investing in new technologies to further differentiate Ticketmaster from others in the ticketing business. It is very notable that today we announce our partnership with, and investment in, Blink Identity, which has cutting-edge facial recognition technology, enabling you to associate your digital ticket with your image, then just walk into the show.”

But with major campaigns by musicians and others to protest such developments and warn folks about the potential negative implications for personal privacy and data protection, those planning to use facial recognition have had to face the music.

The Ban Facial Recognition campaign by a digital rights group known as Fight for the Future seems to have hit the right note.

“While we do not currently have plans to deploy facial recognition technology at our clients’ venues,” a statement released by Ticketmaster later explained: “[R]est assured, any future consideration would be strictly opt-in, always giving fans the right to choose”. 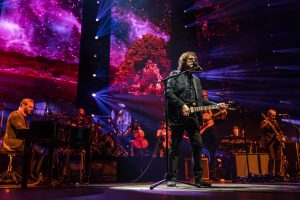 Music fans attending a top rock show or other live event might be asked to opt-in to ticketing and admission systems that make use of the latest developments in biometric tracking, machine learning, computer vision and artificial intelligence, video and audio recording, behaviour and gait analysis and more.

Blink Identity says its facial recognition technology can track and identify more than 60 people a minute, so the turnstiles keep on turning even at venues admitting tens of thousands of people.

Once inside, fans could buy merchandise, food and drinks using a valid charge card or payment system associated with a pre-existing profile – and the right face. 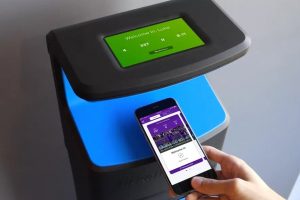 “Facial recognition system developers also tout the enhanced safety and security such platforms can bring to venue operators who say they want or need to know exactly who’s in attendance generally or more specifically, to control access to VIP zones, backstage and other restricted areas.

Folks concerned about facial recognition systems and their potential impact on personal privacy in the consumer space note that the growth of e-ticketing systems means concert or sports venues can already do much the same thing as border guards and military services. Ticketmaster introduced its Ticketmaster Presence e-ticketing platform last year to replace paper tickets with e-passes and other kinds of digital technology that can integrate with facial recognition and proximity-based access control systems.

(For its part, Blink Identity has said the concerns and protests against facial recognition were unwarranted and that the company itself is against “mass surveillance”.) 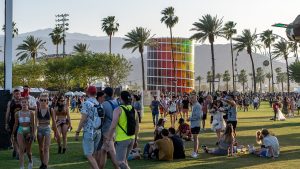 The Coachella Valley Music and Arts Festival, founded in 1999, is now organized by a subsidiary of AEG. Organizers say they will not use facial recognition systems for admittance. Image By Raph_PH – Coachella18W1-18, CC BY 2.0.

And another corporation behind many major music and entertainment events, including the great Coachella music and arts festival, stated earlier this year it too might collect facial images at its events and venues for “access control” – but now AEG has released a statement that its operations “…do not use facial recognition technology and do not have plans to implement.”

Organizers at the Fight for the Future campaign quickly shared the good news on their social media platforms:

“Companies that make facial recognition and biometric surveillance tech saw the music industry as a potentially huge market,” campaign director Evan Greer said. “It seems they may be disappointed due to the overwhelming backlash from artists and fans, as many of the largest music festivals in the world are committing to not use this tech. Our broader national campaign is just growing and picking up a lot of momentum. If we’re able to draw a line in the sand here and say, ‘We don’t want private corporations conducting facial recognition on crowds at music festivals’ that could be really important as we have this broader debate about what role this type of technology can have in a free and open and democratic society.”

Free, open and democratic societies – not to mention rock shows – are a good idea, and campaigns such as this one could cause other live event venues to face the music, starting with sports.

New York City’s Madison Square Garden (home to top sports, music and other live events) was one of the first to use facial recognition as a security measure. Major League Baseball is looking at biometric ticketing systems as well. 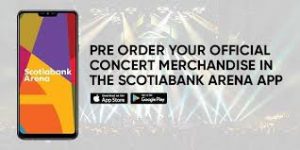 Mobile apps such as one in use at Scotiabank Arena in Toronto are designed to engage fans of live music and sports events and connect them with customer purchase and loyalty options, among other features.

And U.S. Soccer has extended its partnership with TicketMaster as the organization’s official ticketing provider, with plans to leverage TicketMaster’s new biometric capabilities. U.S. Soccer has been using the Ticketmaster Presence as part of a previous deal, and its new deal includes plans to add biometric-based identity recognition for men’s and women’s matches. Ticketmaster also has a major deal with the NFL.

Here in Canada, Maple Leaf Sports and Entertainment is developing new mobile apps for the teams it owns: Raptors, Leafs and TFC, working with a U.S.-based company, Yinzcam, that’s long been a developer for major sports teams and leagues. The company also owns and operates facilities in which the teams play.

Facial scans have not been described as part of the new app features, but paper tickets are not needed

Hexwave scanning systems use artificial intelligence to check for potential threats in real- time as people pass by. Image from Liberty Defense.

with the fully developed app: mobile screens are simply scanned to gain entry. New capabilities could include features to let fans find the concession area or washroom with the smallest lines, and attendees could order food, drink and souvenirs that are delivered right to the fans in their seats – as long as they can be recognized.

But, let’s face it: facial recognition is not the only kind of surveillance technology being deployed in many publicly accessible spaces, not just sports and concert venues.

A Vancouver-area tech company called Liberty Defense Technologies has a plan in place to install its latest high-tech surveillance gear in places like Rogers Arena in Vancouver, Pearson Airport in Toronto and more.

Liberty’s system, called Hexwave, is a real-time 3-D scanning system that incorporates millimetre-wave radar, AI and computer-based image rendering to visually ‘search’ human bodies and other objects that may be passing in front of its two-metre tall scanning panels.

High-res image gleaned from the system (radio waves it transmits bounce back from a person or scanned object to help create an assembled 3-D image) can be analyzed using AI programs developed to say, know the difference between a smartphone and a handgun, or between metallic and non-metallic objects. Images from the system can be also transmitted and stored in the cloud as part of a developing library of potential threats, the company describes.

“Soon, we’ll be without the moon

But while there’s love and romance

Let’s face the music and dance.” 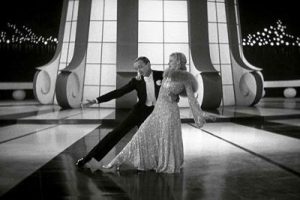 The exquisite Fred Astaire and Ginger Rogers Face the Music in this still frame from RKO’s classic Follow the Fleet (1936). YouTube image.

What’s New In Streaming Devices and TVs From Roku?