Will we see the first casualties of the streaming wars in 2020?

The social media poll caught my eye, but not simply because it opened the door to a spirited discussion about all the different streaming services out there and which one might not survive a year in the crowded media marketplace.

Streaming media fans often subscribe to more than one service: the choices are plenty – and growing. Marketwatch image.

Fans of Netflix, Amazon Prime Video, CBC Gem, Crave, Hulu and lots more, not to mention subscribers of the newest Apple TV+ and Disney+ streaming platforms, all chimed in on which service they liked most, which service they didn’t like at all, and therefore which will not be alive a year from now.

It’s long been apparent that many subscribers use multiple services, yet there must be a saturation point (the casualty question implied) if only because of all the monthly bills those subscribers must pay. 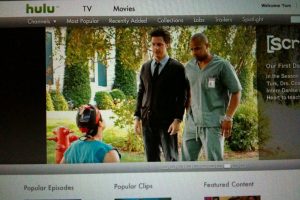 The death watch may not be for streaming media providers, but for viewers. Creative Commons image: “Day 336: Keeping Entertained” by tsmall is licensed under CC BY-SA 2.0.

So the deathwatch may not be for streaming media providers but for us viewers.

We may well be the collateral damage in the streaming media wars (altho’ I don’t think that’s what the social media pollsters had in mind).

It’s because of the carbon footprint left by streaming media. It is a contributor to the current climate crisis and its use can impact us all, whether we watch or not.

Consider this: We live in a world where online video generates 60 per cent of the total global data flow! Because every bit and byte of data we consume is created and delivered using electricity, pretty much every stream we watch can generate harmful greenhouses gas.

In fact, online video viewing can result in 300 million tons of carbon dioxide (CO2 is a known pollutant and major contributor to declining quality of Earth’s air, water, climate and living inhabitants) being emitted every year.

Video is surely simple and easy to watch, but it is an effort to create and deliver. Just that latter stage involves first the storage of huge digital files – and multiple duplicates – in giant global data centres positioned liberally around the world. Those server farms are energy hogs, even with operators’ attempts to go green. 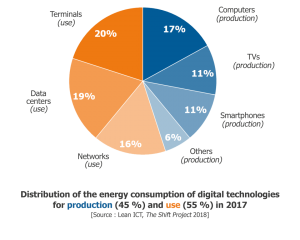 The Shift Project has released a report called the Unsustainable Use of Online Video. TSP chart.

Viewers have come to expect their requested video to be delivered almost instantly, so global data networks (meaning more computers, modems, transmitters, switches, relays, amplifiers and other electrical devices) must carry the load, again consuming resources and emitting CO2. Of course, we then finally get to watch or listen using our carbon-power computers, smartphones, connected TVs or smart speaker devices.

So it could be that our streaming media wars will make us the casualties. Streaming media may be yet another example of what author Neil Postman saw as our astounding ability to amuse ourselves to death.

As the Shift Project report states, “It’s clear that the direct and indirect environmental impacts linked to the uses of digital technologies are both unsustainable and increasing rapidly.”

Our digital technologies now emit four per cent of all greenhouse gas emissions (GHG), and that is said to be greater than from civil aviation.

(Air travel, as you may know, is one of the targets singled out and shamed by environmental activists and global eco-crusaders seeking a greener world: while the practice is controversial, it is driven by real concern. No word yet on a binge-watcher shaming movement).

And the dangerous share of emissions owned by high-tech gadgetry may soon double: by 2025, digital tech is expected to generate eight percent of all GHG emissions, and that is approaching the same level as car emissions.

(Easy targets, cars: we’ve been pointing fingers at them and developing new technologies for them for several years now, knowing that they spew noxious fumes while in use. We need a real change of heart and mind to see the same potential dangers in simply streaming a video, and to then take some sort of appropriate preventative action.)

To that end, The Shift Project report helpfully recommends several strategies to reduce both our overall consumption of online video (one such strategy is to assess the real value or relevance of the streaming content. I won’t pick on cat videos…) as well as to reduce the actual intensity of video’s carbon footprint when we do watch (Does anyone really need 4K, much less 8K streaming video? Is 720p “greener” than 1080p? And why are several autoplay video streams often embedded on the same webpage, anyway?)

Globally, video traffic will comprise 80% of all consumer Internet traffic by 2021, according to Cisco (there’s a heck of a lot of business use of video- and data-intensive streams, too). Within a year or so, the video streaming infrastructure provider adds, a million minutes (17,000 hours) of video content will cross global IP networks every second!

One is hopeful the question can even be asked in years following that. 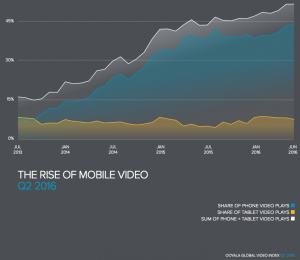 This statistic presents the year-on-year change in watching online video according to internet users in the United States as of November 2018. During the survey, 49 percent of respondents stated that they watched more online video content compared to last year. Statista graph.

Gifts for TV and Movie Lovers