Some drones deliver online purchases. Some deliver food and medicine to underserved or in-duress communities. Some deliver deadly military weaponry to unwilling recipients.

But some drones deliver hope in the form of a seed.

As part of a burgeoning new agricultural sector called automated aerial planting, unmanned aerial vehicles are being used around the world to plant crop seeds, tree saplings and perform other agricultural duties.

Drones, with their GPS guidance systems, increased load capacities and remote monitoring and feedback systems, are enabling new planting techniques like direct seeding and pod planting. They are boosting agricultural intelligence and increasing crop yields with precision planting capability made possible by the remote-controlled aerial technology.

With enhanced safety features like sensors to help avoid collisions, improved data connectivity and telemetry communications, even better data gathering and analytical capabilities, these fixed-wing and multirotor platforms are the Johnny Appleseeds of our age.

And, thanks to the nurturing soils of a local tech incubator, a Canadian tech start-up is using advanced drone technology to fight climate change by planting trees – millions and millions of them.

It’s a lot of work, planting all those trees while protecting existing forest areas. But companies like Ontario-based FlashForest have a solution.

That company’s drones have been used to plant some 40,000 trees in an area north of Toronto, on land ravaged by a seasonal wildfire, in just one month. Sadly, such fires are not an uncommon occurrence: the so-called Parry Sound 33 fire alone took several months to extinguish, back in the summer of 2018. It burned through more than 10,000 hectares and it was just one of more than two dozen such fires that year.

Yet the destruction presented an opportunity for rebirth and an early chance to conduct planting trials by remote control. FlashForest sends its drones over targeted fields while carrying a load of prepared seed pods in biodegradable containers. They plant native pine and spruce trees, both as a reforestation tactic to fight climate change and to restore habitat for indigenous birds and animals. 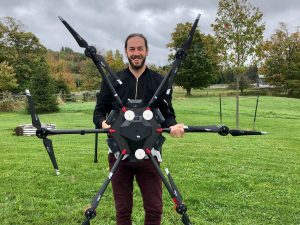 Flash Forest used its technology to plant 40,000 trees in the area in one month. Like its offloaded product, the company has big plans for growth: one hundred thousand a month is an early threshold, and by 2028, company reps have said, it aims to have planted a billion trees!

Like thousands of other young students and summer adventurers, company CEO and founder Bryce Jones used to be a tree-planter. The annual summer experience has been deemed a right of passage by many participants, who recall their experiences with either fondness or horror.

For Jones, the idea that shovels and bags and planting trees by hand could keep up with the pace of automated logging and advanced forest-culling techniques just did not square.

He was motivated to find a way to plant faster than humans. Working with other planters, as well as tree specialists and soil biologists, climate change scientists, product designers and computer engineers, he launched FlashForest.

Successfully planting trees and starting companies have much in common. To start with, they both require fertile land to germinate and grow.

FlashForest found some good conditions at the Centre for Social Innovation in Toronto, where the Climate Ventures Earth Tech accelerator program was running.

It provides mentoring assistance and advice for tech startups and nonprofits working on ways to have a positive impact on our ecosystems, communities and people.

Along with FlashForest Inc., the 2020 project participants that target either climate and freshwater initiatives include: Project Neutral, Dunya Habitats, RainStick Shower, Solar Wind Reliance Initiatives (SWRI) Ltd. and Water Rangers, among others.

The program has become completely virtual in response to the coronavirus pandemic and companies are receiving support remotely. The program’s timelines have been extended and a pitch session that was to have taken place this June will now be in September, and most likely online.

Recruitment for the second cohort of Earth Tech will take place this fall and the next program will start in January 2021. 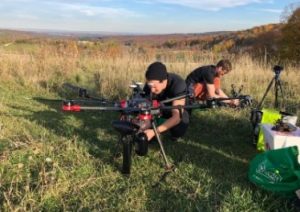 The FlashForest team prepares drones which will drop seed pods, with fertilizers, water and protective pesticides to give the seedling inside the best possible start. FlashForest image.

By providing a nourishing environment in which young tech companies can grow, Earth Tech acts much like the seed pods FlashForest and others use. The biodegradable pods dropped from drones contain fertilizers, water, even protective pesticides to give the seedling inside the best possible start and greatest possible chance for growth and success.

When FlashForest first started they managed to plant about one hundred seed pods on the first day. By the end of their trial, they were planting more than 150 trees every three minutes!

Good ideas, each and every one. 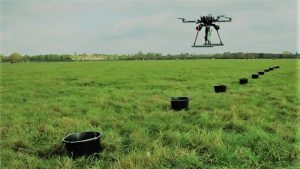 Other tech start-up companies are also involved in drone planting activities. Drones from the startup BioCarbon Engineering, now called Dendra, can plant as many as 100,000 trees in a day; the company has plans to begin a drone-planting program along with Worldview International Foundation, the global nonprofit guiding local tree-planting projects. BioCarbon image.

Distance Learning: Software, Computers, and What Parents Need To Know