A new computer chip with a very small form factor is powering some very big ideas, including the next generation of dual-screen and foldable screen PCs. 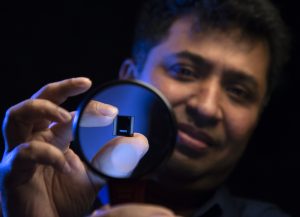 About the size of your fingernail, the new Intel chip called Lakefield is a first-of-its-kind in many respects – from the special construction of the chip or processing core itself to its many touted capabilities, Intel says it represents an entirely new class of chip.

Part of the secret of these chips small size and large capabilities is the way they are made, using a new 3D stacking and packaging technology, called Foveros, which Intel says lets it flexibly integrate I/O, SRAM memory, power, and other PC circuitry.

Normally, computer IC chips are made like a pancake, flat, and two-dimensional. Lakefield chips are stacked in three dimensions, like a layer cake, but still only one millimetre thick.

This means Intel is able to mix and match big and small processing cores on a single chip, stacking its existing Tremont and Sunny Cove 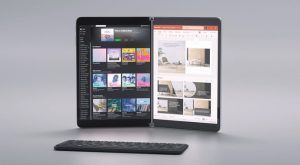 cores into a powerful multi-core architecture, along with new Gen 11 graphics capabilities.

To achieve this manufacturing capability, new CAD tools had to be developed just to execute the architecture, so an entirely new process was created opening up and an industry applicable learning opportunity was presented.

“Intel Core processors with Intel Hybrid Technology are the touchstone of Intel’s vision for advancing the PC industry,” Chris Walker, Intel corporate vice president and general manager of Mobile Client Platforms, described when introducing the chips, “by taking an experience-based approach to designing silicon with a unique combination of architectures and IPs. Combined with Intel’s deepened co-engineering with our partners, these processors unlock the potential for innovative device categories of the future.”

Some of those partners have already announced they’re taking advantage of the new chip’s small size and big capabilities by introducing three unique mobile computing devices with special features, 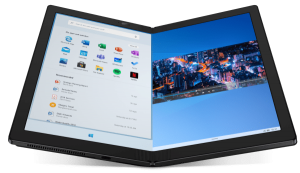 Co-engineered with Intel and its core and hybrid technologies, the Always Connected Lenovo ThinkPad X1 Fold PC features more than 13-inches of OLED screen real estate in a package weighing less than one kilogram.

functions, and design parameters: the dual-screen Neo (and other Surface devices) from Microsoft, the Samsung Galaxy Book S, and the foldable Lenovo ThinkPad X1.

While the planned release of the Surface Neo has been delayed, it is described as a dual 9” hinged-screen device with integrated touch, pen and keyboard user inputs,

Co-engineered with Intel and its core and hybrid technologies, the Always Connected Lenovo ThinkPad X1 Fold PC features more than 13-inches of OLED screen real estate in a package weighing less than one kilogram.

The Galaxy Book S, as announced by Samsung, features 13.3” HD touchscreen, a 42Wh battery that drives hours and hours of video playback in a form factor of again, about one kg. 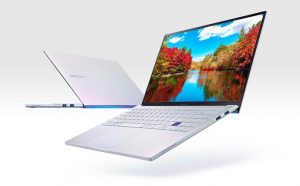 Last fall, Samsung announced the new Galaxy Book Ion based on 10th Gen Intel Core processors. It was co-engineered with Intel as part of its collaboration on the New Mobile Computing initiative with Samsung. (Credit: Samsung)

The refreshed Galaxy Book line-up with the Intel Core i5-L16G7, one of Intel’s two new Lakefield hybrid processors, has been getting good marks in industry benchmark tests.

Intel’s own benchmarking shows its new i5 and i3 core processors with Hybrid Technology and multicore designs can take on heavy workloads, such as intensive AI-enhanced applications, improved graphics performance with support for up to four external 4K displays, and robust video conferencing and online streaming with Intel Wi-Fi 6 (Gig+) and LTE solutions. The processors are fully compatible with 32- and 64-bit Windows applications. 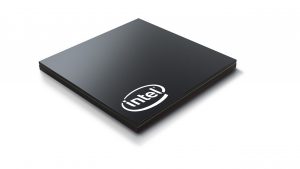