In a series of scheduled virtual events, there will be calls for the federal government and telecom regulators to take action and ensure affordable Internet and wireless services are available to all Canadians.

The free online event is open to the public; planners and scheduled participants in the Day of Action for Affordable Internet hope consumers themselves will join in and urge that a range of actions be taken by the federal government, the CRTC, and the country’s Competition Bureau.

And while a lack of competition has long been cited as a reason for high prices in Canada, the fact that a majority of subscribers stick with the ‘Big Three’ is also a stumbling block to leveling the playing field, at least price-wise.

Canada’s Competitive Network Operators, a trade organization made up of Internet and telecommunications service providers that own/operate telecommunications networks across the country, is also fighting for a fair Internet pricing and accessibility structure.

Affordable Internet activists point out that, throughout the current COVID-19 crisis, reliable and affordable connectivity became even more essential. So did many other things, in fact: many we had never deemed as so important, relevant or even as noteworthy as high-speed Internet, which has always been a bit of a holy grail.

“The affordability and accessibility of the [I]nternet has never been more critical,” says Franca Palazzo, one of the event participants and the executive director of the Internet Society, Canada Chapter. “More than ever, we are being asked to work, learn and connect online.”

While it is true that many of our fellow Canadians are struggling to make ends meet during this pandemic, and they struggle, the coalition says, to pay some of the highest telecom bills in the world (while others can’t even get high-quality reliable connections), it is also true that many of us are using our high-speed connections more than ever – but with no increase in cost or decrease in service as a result of all our pandemic-related stay-at-home, play-at-home, work-at-home or school-at-home activities.

The big three providers in Canada – Bell, Rogers and Telus – are among those companies that lifted data caps on cable and fibre-based residential Internet services; it’s a corporate goodwill gesture, they say, made as a result of pandemic and public pressures. The caps have been lifted until the end of June, where and when possible. (The Liberal government has directed the country’s largest telecom providers to cut specific cellphone prices in general.)

Not everyone is eligible for the pandemic discounts, however: some folks still using cellular (in places where, for example, high-speed networking is not available) for their Internet connections are unable to get discounts because, the telecoms say, bandwidth and capacity would be threatened if caps were removed from cellular service.

“The digital divide in Canada is sometimes portrayed as exclusively a rural-urban divide,” says Sam Andrey, the director of policy and research at Ryerson Leadership Lab, where research and analysis into Internet usage is conducted. “But even in Canada’s largest cities, there are persistent gaps in access to digital services, devices and affordable [I]nternet at sufficient speeds that map onto other socioeconomic inequities, including income, age, race and ability,” he adds.

The pandemic has surely exposed existing inequities in our system of things, be it in health care and medical access, employment standards and fair wages, political responsibility, or telecom availability and pricing.

There have been many studies over the years into Canada’s telecom pricing and Internet availability rankings, and yet another recent international comparison of telecom service availability and pricing again positions Canada down on the list:

In a survey released by comparethemarket.com, looking at the countries leading the way in Internet connectivity, Canada ranked ninth in the top 10 countries with the fastest download speeds, with an average speed of 149.35 Mbps (megabits per second).

The research looked at 35 OECD countries around the world to compare the average monthly cost of fixed-line broadband, the average download speeds, average upload speeds and the time it takes to download one hour of TV streaming.

These charts, as interesting as they are, can be misleading if the exact same package parameters (up and down speeds, peak and average bandwidths, rental costs for accessories, bundled secondary services, etc.) are not compared.

For example, the chart lists roughly a 150 Mbps service in Canada as costing about $75 – $80 (converting pounds to CDN dollars, that is approx.). No download cap or limit is mentioned; any additional modem rental fees can cloudy the comparison, too.

But Rogers is offering (perhaps time-limited, but it only took one check to find this option) its 150 Mbps Ignite service for $35 a month. TekSavvy is about where the chart lists general service, but it offers unlimited downloads, a feature not always listed in comparative charts. 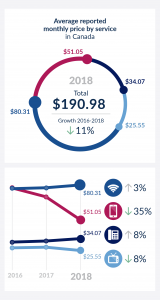 The Canadian Radio-television and Telecommunications Commission, or CRTC, regularly reports on the state of communication systems and services in Canada, including costs.

In general, for service plans with download speeds of 50 Mbps, Torontonians paid between $50 and $93 per month in 2018, according to the Canadian Radio-television and Telecommunications Commission.

Not on the list of Internet options, and perhaps priced way over the top for many, is the new high-speed satellite-based Internet service, called Starlink, provided by Elon Musk’s U.S.-based SpaceX firm. Now available as a “beta test” service in Canada, it offers reliable high- speed at a premium: $150 a month for the service, about $800 one-time for the dish and other rental equipment.

Luckily, that is not the only Internet option in Canada. Not for connectivity, not for pricing.

Near the other end of the cost spectrum, there are efforts by various telecom providers to accommodate lower income and socio-economically marginalized people.

All NCF plans have unlimited usage with no additional charges for heavy usage. One of its accessible packages provides up to 6 Mbps download and about a meg upload for just $25; normal pricing for that type of service is closer to $40.

Nevertheless, even with pretty much all ISPs making big investments in their network infrastructure and overall capacity, Day of Action protesters say government and regulatory inaction is preventing or limiting Canadians’ use of the Internet and providers investment in it.

Bell says it plans to invest some $1.2 billion over the next two years, of which approximately $700 million will be spent on fibre, wireless home Internet and 5G infrastructure. Rogers, too says, it continues to make significant investments to meet growing demand.

TekSavvy, one of the larger Canadian ISPs participating in the Day of Action, is in the midst of several of its own expansions, such as three specific fibre-to-the-home projects, representing a $9.2 million investment, to be completed late 2021 or early 2022. TekSavvy says it will also be investing nearly $6 million to build out a brand new fibre-optic network across the communities.

(But TekSavvy says it had to raise its Internet rates because of an on-going dispute among the bigger telecoms, the telecom regulator and the federal government. There’s perhaps no end in sight to a now four-year regulatory proceeding that saw the CRTC condemn the large carriers’ rate-setting strategies. The carriers appealed, the CRTC balked, and now TekSavvy is back in the courts, challenging the CRTC’s decision.)

About its investment plans, Charlie Burns, TekSavvy’s Chief Technology Officer, says, “TekSavvy is proud to be awarded these contracts to help build world class fibre-optic networks within our own community. We believe that every Canadian should have access to high-speed broadband services, and this allows us to follow that belief with investment and action.”

Be it investment action, regulatory action, or now, perhaps, consumer action, organizers and participants in tomorrow’s Day of Action are sharing the same data stream, as participant John Lawford, the executive director at the Public Interest Advocacy Centre, puts it:

“The first step is protest, the next is action on all of these (regulatory, social, economic, geographic) barriers, which must all be swept away to ensure full and fair access for all Canadians to the essential communications they need to face our changing world of democracy, work, education and entertainment.”

What is the Exclusive Clubhouse App and How Can You Get In?

Canadians Lean into Data to Discover More About Their Families