A new public art activation in Toronto makes use of interactive technology to spotlight issues faced by women – including the challenges of homelessness, but also the obstacles of chauvinism.

For many women, displaced from their homes or estranged from their families, the holiday season can be particularly challenging. Thousands of women and children sleep in shelters on any given night because it isn’t safe at home.

For some women, challenged in their careers and disrespected by their peers, an acknowledgement of their abilities and achievements is often as hard to find as a safe place to stay.

Enter “Maria” and The Shoebox Project.

Maria is the name given to a huge media art installation, covering roughly 12.5 x 14.5 metres or nearly four storeys of a downtown Toronto building. It is a multilayered portrait of women fighting to be recognized, respected, simply heard. The art activation, complete with a QR code, drives passersby to a website for information about the project and opportunities to make donations in support of women experiencing homelessness.

According to Statistics Canada 2019 data, emergency shelters for those fleeing gender-based violence were already at capacity before the COVID-19 pandemic hit: shelters were turning away nearly 1,000 women and children each day. And the pandemic has had an unprecedented impact on vulnerable women and girls throughout Canada. Programs and services are seeing a surge in gender-based violence and economic problems, and they’re struggling to meet women’s needs.

The Shoebox Project for Women is a national registered charity that helps local women impacted by homelessness through the collection and distribution of gift-filled Shoeboxes and messages of support. For ten years now, festively decorated Shoeboxes, filled with items that show respect, empathy, and practical value, have been distributed by the charitable campaign.

The fact that respect, empathy, and value need to be extended to some professional women is also highlighted in the visual montage and art installation. 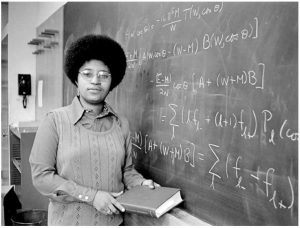 Shirley Jackson at MIT the year she earned her PhD in physics, 1973. Image from MIT Museum.

For example, the face of Dr. Shirley Jackson, the first Black woman to receive a PhD from the Massachusetts Institute of Technology (MIT), is referenced.

Jackson faced disrespect, male chauvinism, even outright rejection during her undergraduate days. But she persevered and went on to do amazing scientific research that led to the development of solar cells, fibre optic cables, and other modern advances.

Give Dr. Jackson a huge thanks: her work also led to the development of caller ID! 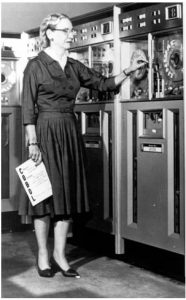 Grace Hopper was awarded the U.S. DoD Distinguished Public Service Award in 1980 for her work concerning COBOL. Courtesy of the Computer History Museum.

Grace Hopper is also celebrated; she’s the inventor of the first computer language compiler (back in 1952), and she’s credited with having the single largest influence on the success of COBOL (the first universal computer programming language).

Likewise, we owe Lt. Hopper a big nod: she’s the one who coined the computer term ‘bug’, still in use today.

Even with these and other references to notable women, one woman in particular stands out for the creator of this interactive public art installation, Canadian artist Daniel Mazzone.

His mother once lived in a women’s shelter only blocks away from where his artwork now hangs.

“My mother and I both experienced homelessness at different points in our lives, so this issue is very close to my heart,” Mazzone said. “I believe art has the power to drive meaningful conversation and social change, and I hope that this activation helps challenge people’s misconceptions and brings more understanding and support to women experiencing homelessness.” 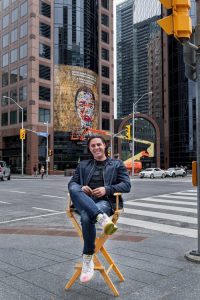 Canadian artist Daniel Mazzone is the creator of a new interactive public art installation, seen behind him. Photo from Business Wire.

Mazzone collaborated with Shoebox partner and title sponsor Klick Health to bring the digitally layered portrait of strong women to life on the front of its Bloor Street headquarters as a way to help bring compassion and dignity to local women experiencing homelessness.

“Women make up over a quarter of Canada’s documented homeless population, but thousands more are considered hidden homeless, living in unstable or unsafe situations, and therefore remain uncounted and unsupported,” said Lesley Hendry, Executive Director, The Shoebox Project. “We want to make sure no woman, no matter what their circumstances, feels invisible, alone, or forgotten by their community and we are incredibly grateful to Daniel and Klick Health for helping to bring our mission to life.”

The activation also kicks off the Toronto-based charity’s holiday fundraising campaign, which is collecting gift-filled Shoebox donations and messages of support and distributing them to local women impacted by homelessness. They can be a powerful reminder for a woman that she has not been forgotten and she remains a valued and respected member of her community.

After supporting The Shoebox Project for five years, Toronto-based health marketing agency Klick Health conceived of the project with hopes of inspiring social change, while enriching the community’s physical environment and commemorating the 10th anniversary of the trailblazing non-profit.

“We are very proud to announce our title sponsorship of The Shoebox Project and highlight the meaningful work they do,” said Klick’s Chief People Officer Glenn Zujew. “We’re also thrilled to be collaborating with Daniel, whose thought-provoking work weaves together a powerful story about finding humanity in the face of adversity.”

The activation can be viewed in-person outside Klick’s Toronto headquarters at 175 Bloor Street East (just east of Yonge Street at Church Street) through the end of the year.

It can also be viewed online at https://www.shoeboxproject.ca/holiday. 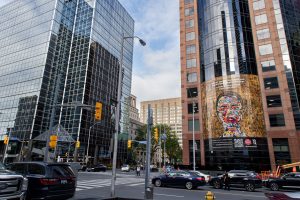 “Maria” is a four-story art activation on behalf of The Shoebox Project for Women. The installation is part of the charity’s 2021 holiday campaign to help women experiencing homelessness.
The activation can be seen on Klick’s Toronto headquarters at 175 Bloor Street East (just east of Yonge Street at Church Street) through the end of the year. Photos supplied by Business Wire.

Great Gift Alternatives for the Person Who Has Everything