3DeeCentral lets you access 3D content that you can watch on your iPhone or PC – with or without special glasses.

What’s cool too is the fact the company has profit-sharing business models in mind for people to create new content for the site, and eventually to provide the site’s content to mobile operators and cable companies worldwide! 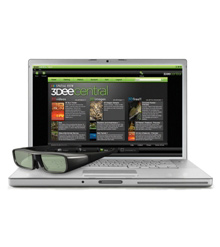 It sounds a little weird these days to say a company founded some seven years ago is still in the early days, but as far as they have come, the folks at Spatial View know they have a ways to go.

So far so good, I found out when they sent me their special 3G iPod Touch screen overlay, called a 3DeeSlide, and when I downloaded the necessary PC app and signed up for the 3DeeCentral service (the sign-up, PC download and 3D watching experience is described below).

But there is a whole lot more to come.

The calendar may say it is spring, but the weather outside says otherwise.

So, too, the fact the company has not yet released its iPhone 4 and iPod Touch 4th gen 3DeeSlide (as promised in the Spring), nor the Android app (also expected in Spring).

I know: they still have time! (At deadline time, there were no further product release details available, beyond the general Spring timeframe.)

But folks are eager for the new gadgets and apps – and for the reported glasses free 3D solution for the iPad they have brewing. 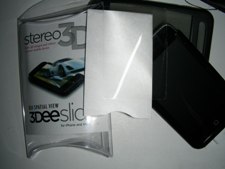 “We will support all new 3D-capable devices including smartphones, laptops and tablets,” says Al Lopez, COO of Spatial View. “We are platform agnostic, (supporting) active shutter and polarized glasses, anaglyph and auto-stereoscopic technologies.”

And he adds pointedly, 3DeeCentral is well positioned as a source of 3D content for them all.

The content – 3D photos and 3D videos – fall under typical categories or genres like  adventure, animation, nature, sports, travel and the like. There are maybe 100 titles, mostly short-form, with a few promos and music videos thrown in. Prices range from $0.99 to five or six bucks, and there is some free stuff to sample.

Of course, the promise is for more content to come, and recently-announced partnerships should help fill the shelves.

“The availability of devices will drive the sale of content, at the same time having content that runs on every 3D capable device and in whatever 3D format is a driver to help those devices sell.”

He also has said he has held discussions with several studios about licensing 3D feature releases.

Creators are able to sell their 3D content to an online audience via the 3DeeCentral platform, which encrypts the content to protect it from unauthorized use, and only lets it be viewed by those with licensed Spatial View client software.

The company is also looking for wireless partners or other network service providers, according to Spatial View’s Paul Roscoe, in charge of channel management. It’s offer them an end-to-end 3D value proposition for their subscribers, driving data revenue through 3D content distribution to a growing subscriber base armed with new 3D devices.

As mentioned, the company launched back in 2004, but the content aggregation and distribution is new.

Spatial View is a technology developer and IP holder. 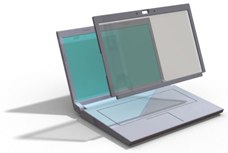 Its innovative start came with the lenticular screen and special software for viewing glasses-free stereo 3D content. It sells screens and overlays to other manufacturers, for laptops, TVs and digital signage technologies. On the mobile side, what is today the 3DeeSlide for iPhones started as the 3DeeShell, and it’s been evolving and improving ever since. 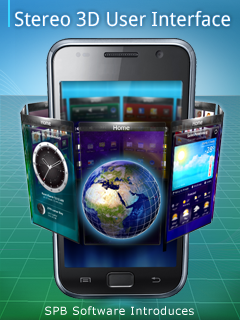 So, right now, you watch content from 3DeeCentral via the downloadable 3DeeCentral application for iPhone/iPod (you’ll need the special screen overlay, too) 3G, or for PCs running either the 32- or 64-bit Windows 7 OS. Older versions of Windows or the iOS are not supported.

On the PC, you will need Nvidia’s 3D Vision graphics hardware, a passive polarized display screen, or – no longer glasses free, a pair of simple anaglyph (like those old red and green) specs.

You can play the content on your big screen TV, too, although supported devices must be HDCP compliant, and mine isn’t. Check the company site for the latest tech specs and device support.

You visit the site to start the password-protected account sign-up, registration and download process. The software loading (the 3Dee app, an Xvid codec and full Direct X package as required) can take several minutes to finish up.

You’ll need an active e-mail address, to which the company will auto-send a confirmation e-mail with click-thru completion link.

Then, you can start browsing the online 3D photo and 3D video library. I started with some free content, just to make sure everything was working fine, including nature photos and an animated movie.

The app has a special proprietary player developed by Spatial View, and you can tell it your preferred viewing style or target device.

For me, in this case, it’s my laptop, and I’m using anaglyph glasses.

Starting with some free 3D nature images, I looked at statues in a garden, close-ups of flowers, a nice urban rooftop scene. They all looked crisp, sharp, ‘deeper’ in many ways, but I was moving around a bit and adjusting the glasses to try and get a honest to goodness wow 3D.

While looking at the photos, I was downloading a 3D movie in the background. That’s a nice feature, as the content downloads can be lengthy – a 200 MB file is not unusual.

I watched scenes from ANA, a Mexican animated 3D film from a company called Lo Coloco, which had its debut at Cannes to much acclaim, and I could see why. An engaging little girl is the lead character, in a mysterious and somewhat foreboding setting, full of great 3D scenes with real perspective and added dimension.

When I first saw 3D content on an iPhone, equipped with the Spatial View 3D screen overlay, I had that wow moment. Watching 3D scenes shot professionally, out a car driving along the California coastal highway, I was like leaning and ducking with the scenery, sticking my head out the imagined window, almost screaming with joy!

It may take a while to really nail this stuff, but it’s got obvious potential. Just saying ‘glasses free mobile 3D imagery’ is fun, much less watching it.

Spatial View can see it. Thanks to them you can too.

I know there are other 3D solutions out there, have you see them? Or 3Dee Central’s?