Apple hasn’t been here in years; Microsoft now says it won’t be participating next year!

Shhh! Now’s our time…we’re takin’ over. Well, Canada’s working well with others, at least.

As the Consumer Electronics Show (CES) hits its stride today, really the first full day of marching up and down the trade show aisles, lots of great Canadian content is on display.

Research In Motion will surely make news (more on that in a moment), other Canadian companies are already attracting eyeballs.

And why not – especially if you are reinventing photography? It’s not photography anymore – it’s Tamaggraphy.

It comes with a 14 megapixel chip and patented panomorph technology that is way beyond those old, stitched-together photo panoramas from years past.

And it has already been selected a 2012 CES Innovations Awards honouree for digital imaging. 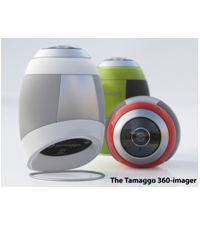 The $200 device should be on the shelves by Q2, the company says.

Maybe someone should put RIM under a 360 imager, just to see where the company’s really going.

With talk of new leadership echoing almost everywhere here, the tablet and smartphone maker is previewing new operating systems for its devices.

(We’ll have more reports from CES in the days ahead, as WhatsYourTech.ca contributing editors Ted Kritsonis and Gadjo Sevilla, who are in Vegas now, file their reports and perspectives on show developments.)

But one interesting sidebar to the RIM story is the big endorsement it has received from U.S. broadcasters – particularly FM radio operators, who are all enthused about the fact RIM will allow BlackBerry users to activate the FM chip in their smartphones.

RIM’s announcement is “wonderful news for radio” said one operator, noting that it is critically important that radio stations be on as many mobile devices and platforms as possible these days, what with streaming radio and music downloads so popular.

Getting media onto multiple devices is a common theme at CES, and other Canadian companies are singing the tune out loud.

Among them Morega Systems,  a Mississauga, ON-based company that develops all manner of ‘multi-screen media portability solutions’.

The company already is big into set top boxes (STBs), digital video recorders (DVRs), network attached storage (NAS) devices, and so on, but as CES it’s extending the ways it can deliver digital media content to other screens and devices, including tablets, smartphones and PCs.

It has also introduced software development kits (SDKs) for embedded Linux platforms and media players on the latest popular mobile and PC operating systems, including Android, iOS, Windows and Macintosh, so there will be more news from Morega, for sure.

And an Alberta company is also doing its best to help broadcasters (and independents) get as much of their content to as many consumers on as many devices as possible.

Mobovivo develops online and mobile applications that connect film and TV content to a viewer’s social network, building a kind of ‘virtual water-cooler’ where fans can get and share even more information about their favourite stars, movies of TV shows.

Even if you are watching a movie on DVD, Mobo can connect you to the film’s Facebook page or the star’s Twitter account or a dedicated and user-branded microsite with special online content and related merchandise of its own – that’s part of the announcement Mobovivo made at CES, that it is now working with another Canadian company, the DVD replication giant Cinram.

The CES ‘TV anywhere’ resonates on the show floor, and in the conference sessions, too. Leaders from the mobile, film, and television industries and discussion themes will cover content creation and distribution, new business models, social networking and the evolving ecosystem of the digital media space.

Poynt, another Alberta company, takes the concept of ‘search’ a little further, and connects it to ‘discovery’ and a sense of shared adventure. In the media space, this means a Poynt GPS-enabled mobile app can, for example,  be used to watch movie trailers and reviews, buy movie tickets, get directions, browse listing, read reviews and interact with local coupons and other unique offers.

The goal is to boost and build the digital entertainment eco system, in as broad and deep a definition as you care to use.

“Companies that are disruptive in the technology space recognize that the consumer and innovation go hand-in-hand but ultimately it is the consumer who says who wins and who loses,” said Andrew Osis, CEO, Poynt Corp. “I am excited to share the stories of our successes and challenges with my fellow innovators and entrepreneurs on the panel.”

No matter which device you use, Vivick probably has an accessory for it.

Vivick designs, produces and markets accessories for the full range of Apple products, including the MacBook, iPad, iPod and iPhone, as well as PC laptop tools and enhancements, portable rechargers, headphones, earbuds, Bluetooth devices and more.Mobile accessories and gadgets from Vancouver’s Vivick at CES. 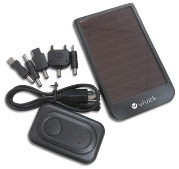 Mobile accessories and gadgets from Vancouver's Vivick at CES.

With plans for a 2012 rollout through U.S. retail distribution and online sales, Vivick views CES as its official U.S. launch party.

While new to the U.S., Vivick has a long reach. It’s doing a lot of R&D in China these days, but it was actually founded back in 1985 at the Emily Carr design school in Vancouver – where the company still maintains a presence.

Canada – and consumer electronics – is connected to another emerging theme at CES, the Connected Classroom .

It posits that students should be able to interact directly with teacher-curated content and benefit from a technology-enabled one-on-one learning experience. Teachers receive instantaneous attendance and class participation data, real-time comprehension results with detailed analytics, and out of classroom usage information via wireless devices and administrative software tools

Working with companies like Apple and Alcatel Lucent,  LearningMate is showing off a cloud-based approach to the connected or intelligent classroom at CES.

“Apple iPads and Android tablets made significant inroads into school and college campuses this past year. The Connected Classroom leverages these devices to create a simple and effective cloud based teaching and learning workflow,” said Mohit Bhargava, President, LearningMate Solutions (Canada) Ltd.

Teradici, the BC-based developer of  PC-over-IP protocols, is using CES to show off its desktop virtualization solutions that can be used to connect business and enterprise users.

Working with Texas Instruments, Teradici is showing the multicore processing power of virtualization and PCoIP protocol.

“Teradici’s continuing innovations in hardware, software and protocol deliver even greater flexibility for workers to access their VDI environments remotely and use new client form factors such as tablets and phone devices,” said Dan Cordingley, president and chief executive officer.

At CES, you can look at the desktop work environment in a new way, see the classroom learning space in a different light, and watch the mobile or home entertainment world with new eyes.

SpatialView, the Toronto-based developer of stereo 3D content production and viewing technology, is working with the legendary toy company Mattel and its subsidiary Fisher-Price. 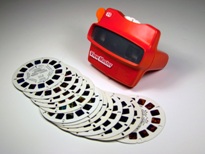 The classic ViewMaster reels get a new 3D treatment from Toronto's SpatialView.

They will soon release a selection of images from the classic old View-Master image archive, one of the largest in the world, as digital downloads for viewing on 3D enabled devices.

Some of you may remember those old, circular cardboard reels, embedded with tiny pictures or photo transparencies of global.  Well, there’s literally been billions of them sold, each containing pictures that cover a century of pop culture, current events, nature, science, history and travel.

Launching in late Q1, 2012, the online digital content store will include a selection of titles from the archives.  Using Spatial View’s innovative 3DeeSlide accessory for the iPhone 4/4S, users will be able to see View-Master images in 3D, without 3D glasses. Support for Android 3D smart phones, Windows PCs, and 3D TV platforms will follow.

“View-Master images hold tremendous nostalgic value for me and many people around the world who fondly recall discovering far and exotic corners of our planet or marvelling at seeing their favourite characters in 3D through their View-Master viewers,” said Al Lopez, COO of Spatial View. “We feel privileged and honoured to work with Fisher-Price to bring this extensive historical archive of spectacular 3D imagery to a variety of digital mediums.”

From the past to the present on to the future, Canada continues to put out the hardware, software and wetware that are key to the success of the global consumer electronic s industry.