When you’re watching TV at home, the fact is it can watch you, too.

George Orwell’s ‘Big Brother’ scenario in which a TV is converted from being a window on the world to being a window into our personal lives is fast becoming reality. 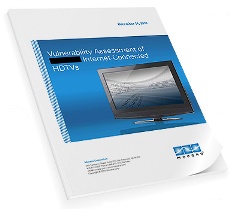 The biggest and brightest TVs out there — now called smart TVs — have Wi-Fi, Ethernet and high speed Internet connectivity, and each one is a potentially open door into not just your viewing habits.

All this technology means that smart TV watchers can check e-mail while watching; they can share thoughts across social networks using dedicated apps; they may even be voting or connecting in real-time with reality-type interactive programming features.

In his look at some of the latest smart TV products and features, WhatsYourTech.ca correspondent Gadjo Cardenas Sevilla noted that “Blending successful ingredients such as Internet connected HDTVs and app-focused smartphones and tablets into smart TVs could either be the next great thing or a bumbling and expensive Frankenstein’s monster.”

Many of these devices have hit the marketplace with entertainment and usability in mind; not privacy and security.

The connections on the back of a smart TV can be like open doors for unwanted visitors.

So a report from security vendor Mocana actually quantifies just how Frankenstinian the new smart TV technology can be.

In a comprehensive research study, Mocana showed how connected TVs could put consumers’ privacy and data security in jeopardy, and how hackers could easily get past the minimal security built into Internet TVs and set-top boxes.

Hacking TVs and set-top boxes can be as simple as writing up a short JavaScript, the report showed, adding that gaining root access to a set-top box or smart TV is merely a starting point for getting access to any other device or machine in your house.

The TV connection can be hijacked and turned into a private proxy server, and a digital mask for unauthorized online activity for which you would pay the price. From your smart TV through your connected home network, and on to the entertainment gadgets, data storage, alarm devices, or other internally network home system, there’s a digital path that hackers can easily follow.

As Mocana’s CEO Adrian Turner sees it, his study sheds new light on old concerns – even if they are embedded in new devices: “While much public discussion is currently focused on the recent explosion of smartphones, what’s not being talked about is that fact that the vast majority of new devices coming onto the Internet aren’t phones at all: they are devices like television sets, industrial machines, medical devices and automobiles – devices representing every conceivable industry. And the one thing that all these manufacturers have in common is that, unlike the computing industry, they don’t have deep experience in security technology.”

Cameras and microphones are being included with smart TVs.

Someone who does have deep experience in security is the director of the U.S. Central Intelligence Agency, David Petraeus.

In his own revealing way, he noted the power of “everything from fridges and ovens to doorbells and clock radios” to be controlled remotely.

As Petreaus called them, “items of interest” can be “located, identified, monitored, and remotely controlled through technologies such as radio-frequency identification, sensor networks, tiny embedded servers, and energy harvesters — all connected to the next-generation Internet”.

Being able to reach inside the home means such capabilities will “transform surveillance”, the former Army general and chief of staff stated.