In November, the City of Toronto launched its King Street Pilot Project, in which transit vehicles are given priority over passenger and other vehicles, particularly during weekdays and rush hours. The goal of the pilot is to improve transit service and speeds along one of the city’s – and the country’s – busiest surface routes. 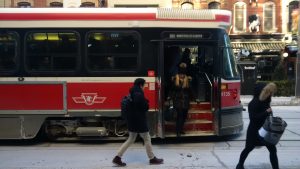 One of the reasons there seems to be less foot traffic on King St. may be that it is too #%^&$ cold! But some local restaurants say the lack of car traffic and street parking caused by the pilot has cost them business. The City is now offering parking discounts at lots nearby, and a meeting with the Mayor is planned for mid-January to review the pilot project’s impact overall.  LR smartphone snap.

As part of the review and evaluation process, data is being gathered from a number of sources and analyzed to determine results. So far, a measurable increase in transit speeds has been achieved, bringing a faster commute to the tens of thousands of people using the King St. line every day. In fact, additional streetcars have been assigned to the route based on reports and analysis so far.

Data sources include the transit vehicles themselves, as Brad Ross, the TTC’s Executive Director of Corporate Communications, described in an email exchange with WhatsYourTech.ca: “We’re doing trip time counts, ridership counts and reliability counts using existing GPS technology that tracks all TTC vehicles. There is also an automatic people counter that we’ll start using that measures boardings and alightings.” 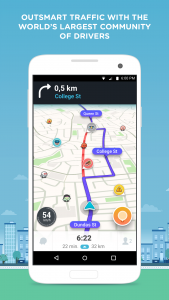 Another data source is people using the route, or travelling on adjacent streets. In particular, drivers (and theoretically, pedestrians, bike-riders and other app users not in a car) using the Waze traffic app are contributing information by observing traffic conditions and uploading data in near real-time about what they’re encountering, as well as information about emergency traffic situations like accidents and other temporary obstructions.

Waze is one of the world’s most widely used traffic and navigation apps, and the community of users that has built-up around the app collects and contributes an enormous amount of data, not just to Toronto, but to several cities around the world. The app is available for Android and Apple devices.

Through what’s known as the Waze Connected Citizens Program, Toronto is one city able to tap into a data exchange program that uses mobile technology and crowd-sourced traffic data to give cities a free and two-way tool to make informed decisions and enhance their traffic infrastructure

“We’re thrilled that City of Toronto is our newest Canadian Connected Citizens Program (CCP) partner,” described Waze Canada Country Manager Mike Wilson. “Waze is just one layer of data to address our city’s traffic and congestion needs. Waze data can be used to analyze the effectiveness of pilots – like the one on King St. – to better inform city planners on what is needed and where.”

With a described community of Waze users in Toronto area alone of more than 560,000 active users, the amount of posted information about traffic accidents, road hazards and congestion details is quite significant, and it enables City staff to better respond to issues as they occur.

“For the first time, the City is sharing its traffic data with Waze and Waze users. This partnership will give our traffic operations centre better visibility into traffic patterns and provide Waze users enhanced information to plan and adjust their commute,” said Mayor Tory when announcing the partnership.

Waze makes the data available to its CCP partners through a localized XML or JSON feed that gets updated every two minutes. Waze also has a Web-based interface, the Traffic View Tool, through which partners have access to real-time, user-reported incidents and estimated travel time along pre-selected routes. 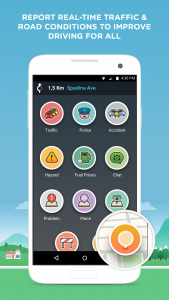 As Wilson described it in correspondence with WhatsYourTech, the process to report a traffic situation is designed to be intuitive – and safe.

“As a driver you shouldn’t be operating a mobile device while driving, however with the ‘OK, Waze’ voice activated feature enabled, you can simply say ‘OK, Waze, report a traffic jam/accident/police/hazard’ and then tell Waze what the traffic incident is that you’d like to report, including any other additional details you’d like to provide, i.e., a stalled bus in the right-hand lane on Front St. approaching Spadina. The GPS location of your phone and your voice command, ‘OK, Waze’ will help pinpoint the exact location of the incident you’d like to report.”

Non-voice activated reports within the app are simple enough: once opened, the app displays a map with the user’s current location. Selecting the orange button on the lower right of the screen (looks like a location marker) brings up a small window with all the types of categories to report (i.e., Traffic Jam, Police, Accident, Hazard, Construction, etc.). A series of windows and prompts helps complete the report and submit it when ready.

The number of reports received about the King St. project will be an interesting data point in its own right, and Wilson noted that during the pilot, which will run for another ten months or so as originally conceived, several different kinds of data will be collected and regularly shared with the public, including transit speed and ridership, traffic speed and counts, parking and curbside usage, pedestrian counts, cycling counts, safety measures, retail sales and others. The data will be posted to the project website.

The City itself is collecting data from both the Waze user program and other sources; it has a comprehensive website where project descriptions, current data and the updates can be found.

Of course, the collection of crowd-sourced data raises certain issues of personal privacy and security. 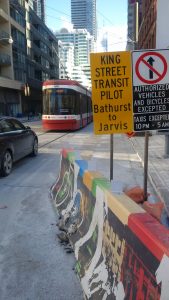 Consumer – and driver – habits can be slow to change at the best of times. Reactions to the King St. pilot project are mixed, as might be expected. But specific project goals like reduced travel time and more reliable service are being met, according to data analyzed by University of Toronto researchers. LR smartphone snap.

Waze makes it clear in its Privacy notice that content shared is “neither private nor confidential and you should not have any expectation of privacy with respect to it.”

Traffic information that users upload will be posted along with other personal information. Reports about road incidents may include the user’s driving path within the vicinity of those incidents, and so the company itself warns that “you must exercise caution and common sense when submitting information. At the very least you should demonstrate the same degree of caution as when publishing personal information by means other than the Internet and cellular services.”

Hey – that’s good advice to any app user or Web surfer these days, and particularly in situations of crowd-sourced data collection.

Another sign of the times: Waze is one of several new apps or devices that collect voice information, and the company points out that voice files, if shared, will be available to “Waze users and other people … to download and use”. (Waze also states plainly that the “user alias of each report is never shared” and neither is non-public user information.)

As Wilson noted (and as drivers pretty much anywhere can confirm), “Traffic is a universal problem.

“Waze was founded on the belief that we can outsmart traffic together,” he continued. “Our partnership with the City of Toronto to have access to real-time data as reported by Waze users allows the City to make changes to infrastructure to better travel times and driver experience. [T]he City will now have greater visibility into traffic patterns and be able to make better planning decisions.”

5 things you should know about the GoPro HERO6