Inclusivity and gender parity is critical for the growth of tech excellence in Canada. 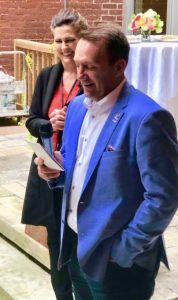 Luc Villeneuve, president of Benchmark, is a public and corporate advocate aimed at levelling the tech playing field. “I am a proud advocate of guiding positive change for underrepresented and minority communities.”

“One of my proudest moments,” shared Villeneuve, “was being chosen as a finalist for the Microsoft INSPIRE2018 Women in Technology Man of WIT Award which celebrates men who support diversity and inclusion.”

Recently, Villeneuve was “asked to collaborate with the top gender diversity experts in Canada at the University of Waterloo at a one-day strategy session on Best Practices with Kathleen Wynne, Elizabeth Dowdeswell, Ontario lieutenant governor and writer Shari Graydon.”

I’ve also built a 000 + network on LinkedIn to create a meeting place for the most impactful D+I dialogue. It took time to curate my community LinkedIn network with diverse leaders to attract, engage and deepen relationships with women who I can leverage or recommend for potential jobs.”

I asked Luc Villeneuve about gender parity and inclusivity for women in the workplace, and to share his perspective about breaking down gender barriers for women in technology.

Lead by Example: “There is no question that gender diversity is a business imperative with a massive body of evidence demonstrating a tremendous impact on the bottom line,” began Villeneuve. “Leaders tend to be focused on hard targets and achieving financial goals – it’s what they are measured on. Being a gender diversity leader is uncharted territory. Yet, the future will be driven by diverse ideas and talents.”

Villeneuve added, “Employees want their CEOs to lead by example and champion diversity and inclusion. We have a history of delegating gender diversity to human resources and female leaders. Today, leaders must lead by example and embed gender diversity in the DNA of your company – set goals, support employees in driving change, establish a process to share great ideas and celebrate stories of success with your team.”

Eliminate Systemic Biases: “Your job advertisement is so powerful,” said Villeneuve. “It reflects your brand promise. The language is so important. A simple word or phrase could convince a woman that they don’t belong at your organization,” explained Villeneuve.

“I’ve been working with my HR teams over the past number of years to help eliminate any systemic biases that can be barriers to success,” said Villeneuve.

Continue to Build the Pipeline of Talented Women: “We all aspire to gender parity, yet many of us are still struggling to create a pipeline of qualified women to ensure you have a balanced short list when filling critical roles,” said Villeneuve. “It takes work and we all need to invest the time and learn from each other. I continually seek feedback from my network of women. I’ve discovered invaluable feedback that includes comments, such as it’s challenging to meet my hiring deadline because of their commitments to their employer and family. They also need longer lead times to assess the benefits and risks of making a move. Because of this open dialogue, I’ve changed my hiring approach. I’m in touch with female candidates to plant a seed before a job is available.”

Managing the Barriers in Career: “We want to attract more women to the tech sector,” began Villeneuve. “The New York Times coined the phrase the ‘opt-out revolution’ to describe the number of women from all sectors choosing to leave their careers. There is a critical need to retain women in the pipeline.” Villeneuve remarked, “We need to understand when women choose to leave and why. We don’t have great Canadian data to provide insight and we all need to work together as a community to find out and support women.”

Role models: “We have to celebrate our female role models,” urged Villeneuve. “In my career, I have replaced myself many times with women. I continue to support their careers and promote their success to young women who are eager to hear about their path to success and advice on navigating the challenges and opportunities.” 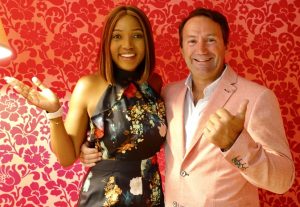 I met Luc Villeneuve at “The Power of Your Story” event this summer, in fact, which was hosted by Benchmark and CompTIA. Presenters included Mpumi Nobiva, graduate of Oprah Winfrey’s Leadership Academy for Girls; Tim Cork, coach and Mpumi’s mentor; Chioma Ifeanyi-Okoro, CPA, CMA and Founder, My African Corner; Riya Karumanchi, Founder and CEO, SmartCane; and Vanessa Vakharia, Founder and CEO, The Math Guru. See my article about the event at The Power of Her Story: Tech Trailblazers.

“My daughter, Stefania, inspired me to advocate for gender equality”, added Villeneuve. “She is a phenomenal young woman who’s forging her own path in tech, has the highest standards and believes hard work pays off. I want to create opportunities for her and women like her who want to reach their full potential.

I asked Villeneuve how other tech executives can empower marginalized people in their businesses, to which he replied, “Being an ally is all about showing vulnerability, confronting your own prejudices and dealing with discomfort to be an understanding and open-minded friend. Your voice is powerful. Speak up when you feel someone is being treated unfairly, particularly when it contravenes the corporate values that represent everyone in the organization.”

Inclusivity and gender parity, I agree, is critical for the growth and excellence of women in tech in Canada.