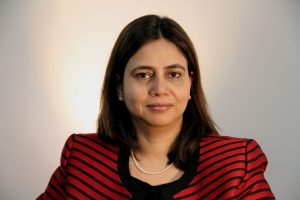 Saher Fazilat is the assistant vice president, capital facilities and capital projects (CFCP) for Ryerson University. Fazilat is responsible for the planning, design and construction of new buildings at Ryerson, as well as overseeing campus infrastructure maintenance. She is a well-educated, civil engineer with 17 years of construction experience. Fazilat is also a STEM advocate who believes in supporting STEM interest an aptitude early on.

“Supporting and guiding young girls into science, math, engineering, and technology can never begin too early,” says Fazilat. “As girls show aptitude in these areas, the skill set should be noted, encouraged, and developed with education, real world experiences and mentors.”

“Growing up, I was a very curious child. My parents noticed I had a flare for numbers and my father immediately became very supportive … and was instrumental in me pursuing engineering,” explained Fazilat. “He was always telling me that civil engineers need to go in boots and hats outside, and do work there, which later shaped my work ethic.”

“I started my career in India, and I came here thinking women will have a better chance of doing this work traditionally done by men but still, many years later, I see very few women in heavy construction,” said Fazilat. “I think there are systemic barriers that are rooted at a young age, which is when girls are typically discouraged from entering STEM.

“The biggest obstacles for girls in STEM are bias and stereotypes – often girls don’t know anyone who they could relate to in these fields. Although women earn a larger share of conferred degrees, they earn fewer degrees than men in science and technology so it’s critical for parents and teachers to provide the support network to show that anything is possible.”

“STEM is integrated into my life, not just work. I’m a life-long learner and still live by the curiosity that got me into STEM in the first place, it’s important to explore new, more efficient methods and technology. I’m involved with STEM as a professional, leading construction for Ryerson University, but also as a parent. My daughters excel at math and are involved in robotics competitions so as a family we’ve integrated STEM into our daily life.” 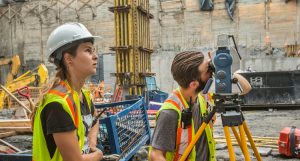 Technological advancement has touched everything and construction is no exception.

“When I started working in construction back in India, the process was very different,” began Fazilat. “Now, we use tools like Building Information Modelling (BIM), which is a collection of data organized in a visual and numerical way. It’s a digital prototype of physical building elements such as walls, windows and stairs that simulate the building and [helps us to] understand its behavior in a computer environment way before the actual construction starts.”

“Virtual reality has also changed how we design, build and sell property,” expanded Fazilat. “With VR you don’t physically have to be in the space to see what a new condo will look like, it allows to see such intricate details as light and shadow, how the materials will look. Simulating an environment helps anticipate issues and expedite the construction process.

Advice for women in STEM
“My biggest piece of advice is have confidence and stay focused – there are no shortcuts when it comes to hard work,” said Fazilat. “It’s true that STEM is very demanding, but anything is possible through passion, perseverance and hard work.”

IBM Shines a Spotlight on STEM

Women Who Invent, Analyze and Mentor: STEM in Action

Who is Inspiring STEM in Canada?

Canadian C2 Conference Previews the Future with Commerce and Creativity

The future of photography is computational