This is the future.

As much as social observers, media analysts and tech commentators try to predict the future, telling us what new AI, AR, ML, 5G, surveillance technologies, smart cities and more will do for us and our society in years to come, one key point is often overlooked: this is the future. It is here, now, in technocolour and ultra high-res.

We are in the midst of what is to come. Technology’s impact on us is both profound and present. That fact may be threatening to some, amusing to others. 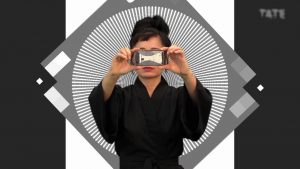 The lines between art, surveillance, consumerism and societal control blur in a haze of real and virtual,  personal and political: Still frame from Hito Steyerl, How Not To Be Seen. A Fucking Didactic Educational .MOV File , 2013. HD video file, single screen, 14 min. Image from YouTube TateShots.

It may be both to German-born contemporary artist Hito Steyerl (‘hee-toe  ssh-tair-ull’).

She’s also an accomplished writer, filmmaker and multimedia content creator (not to mention professor of Arts and Multimedia at the University of the Arts in Berlin); her topics of interest include the Internet and the digitized global culture in which we live, work and play.

As serious as the topics are — and as critical as she is of the many ways technology is used for social control, militarization and surveillance — the concept of play is important in her art.

You’ll get the chance to experience that for yourself when the first solo exhibition in Canada of Hito Steyerl’s highly techno-enabled art opens at the Art Gallery of Ontario next week.

It is surely art for our digital times: full of pop culture references, packed with familiar gadgets, sprinkled with the occasional four-letter word, Steyerl’s art describes our daily interactions with technology with great insight. 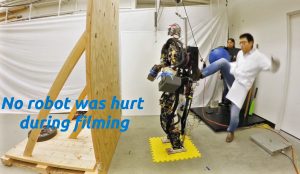 Called Hito Steyerl: This is the future, the exhibition takes up an entire floor of the AGO’s contemporary tower. There are single- and multi-channel video projections, giant synchronized smart screens, elaborate architecture and physical structures – even live plants grown as part of a unique garden-in-the-Gallery. Surround sound audio tracks will leave exhibit visitors feeling well-informed – or like dancing furiously.

Steyerl’s artwork takes the idea of visitor interaction to a new level when you enter what appears to be some sort of giant multi-level obstacle course, a parkours for the digital age.

And when the artwork begins to question its own handy digital assistant, just as so many of us do with our own voice-activated gadgetry, the lines between art, surveillance, consumerism and societal control blur in a haze of real and virtual, physical and digital, personal and political:

“Siri, who bombed my city?”

The commentary embedded in Steyerl’s multimedia artwork is straight out of today’s headlines as much as it is a part of the latest tech product reviews. There’s recognition in this exhibit of the many ways new media and digital technology distort how we see the world, or are used to distort the world we see.

At the same time, this art shows us that all the images we ourselves generate for social media are shaping our own distorted reality.

“We are embedded in media, and used by media; it’s not external to us,” Steyerl has said.

As such, technology is as much personal as it is political. And so is the storytelling embedded in Steyerl’s art: she draws us into her world by sharing youthful memories and stories about personal friends, even as she reads the headlines from top news sites around the world. She shows our lives are built on connections; we are just as networked as the digital world around us.

The AGO is not only exhibiting Steyerl’s remarkable and relevant artwork, but the Gallery is also making its own connections during the run of show: lectures, workshops, artist and curator talks and much more are all part of the programming that supports the exhibition.

Steyerl will speak at the show’s opening next Wednesday, October 23. Later in November, a Steyerl Study Day will be held, during which the topics and technologies used and discussed in the exhibit will be explored in detail.

In between those events and intersecting the exhibition’s timely topics will be a talk from Canada’s own technology, surveillance and control expert, Ron Deibert.

He founded Citizen Lab at the University of Toronto in order to describe and document how technology is changing the flow of information online and how civil liberties are threatened, especially when the often-unseen digital hand of government agencies and other state actors is in control.

Steyerl speaks highly of the work Deibert and the researchers and engineers at Citizen Lab do, and she’s very aware of the investigations into Internet and technology-related topics they’ve conducted for like twenty years now.

This is the future.

Lee Rickwood is a part-time writer, editor and media technician at the Art Gallery of Ontario. 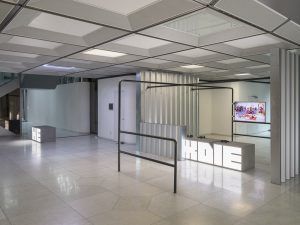 The idea of interactivity is taken to a new level when you enter what appears to be some sort of giant obstacle course, a parkours for the digital age. HellYeahWeFuckDie, 2016. Three-channel-video installation, environment, 4 min., HD video Courtesy of the Artist and Andrew Kreps Gallery, New York © Hito Steyerl. Installation view 2017, photograph: Henning Rogge.

How to Choose A Mobile Phone Plan For Business

BooknBrunch: The ‘Yummy’ Evolution of the Book Club